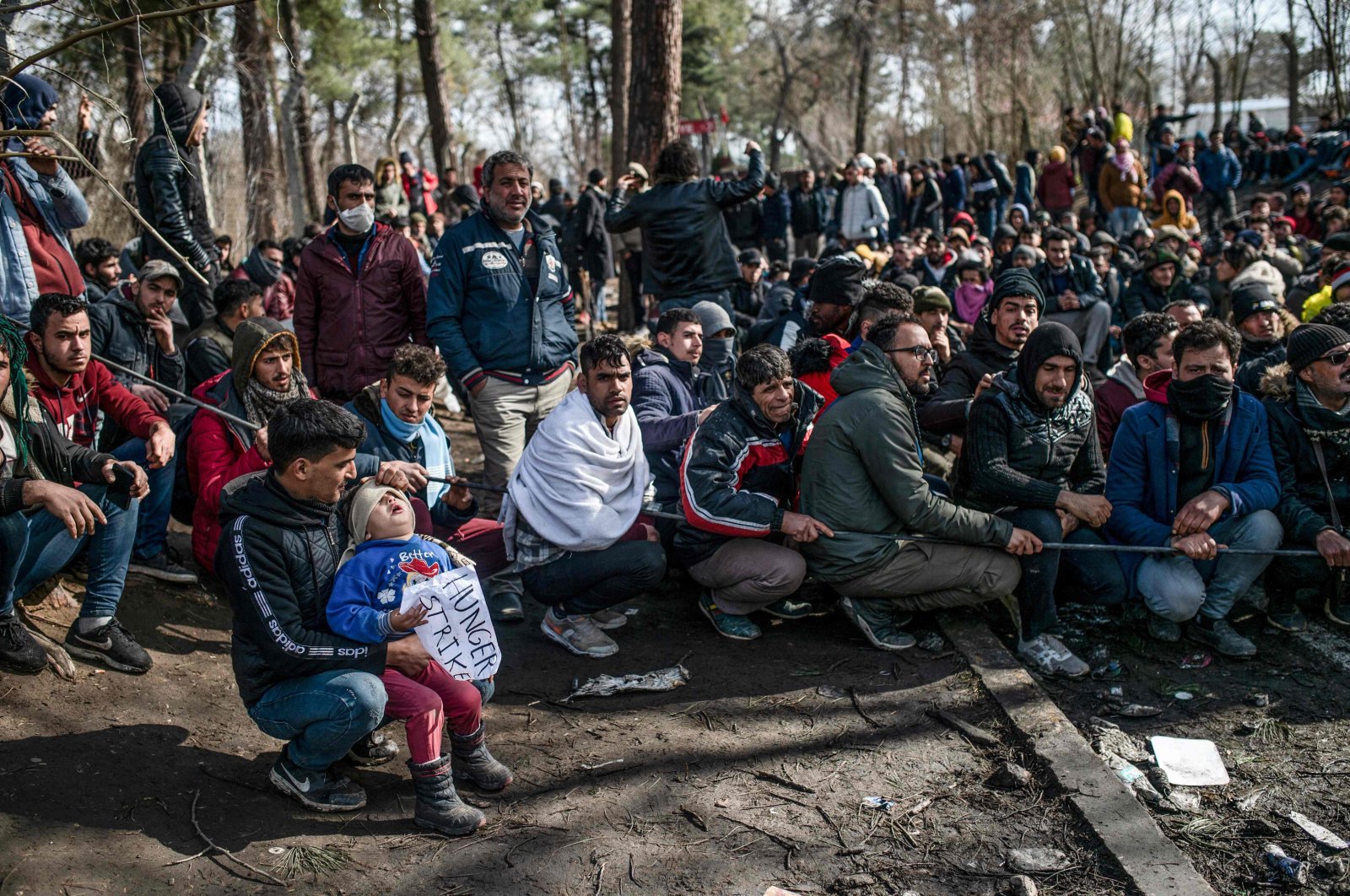 Refugees and migrants wait with their children in the buffer zone at the Turkey-Greece border near the Pazarkule crossing gate in Edirne, March 5, 2020. (AFP Photo)
by DAILY SABAH Jun 25, 2020 12:47 pm
RECOMMENDED

Turkey on Thursday slammed the recent remarks by Greek Foreign Minister Nikos Dendias and the European Union's chief diplomat Josep Borrell in criticism of Ankara's handling of the migrant issue along its borders, describing them as an attempt to cover up Greece’s human rights violations and crimes against migrants and refugees under the EU umbrella.

The statement by Foreign Ministry spokesperson Hami Aksoy also added that the fact that the EU Commission has been a partner to this attempt is exemplary.

Aksoy cited the words of Dunja Mijatovic, the Council of Europe commissioner for human rights, saying that it is the moral and legal obligation of member states to respect and protect the dignity of asylum-seekers.

“Instead of blaming our country, we once again invite the EU and Greece to fulfill their own responsibilities and to respect the rights of asylum-seekers,” Aksoy said.

The EU is determined to protect its borders, Borrell said Wednesday, as Greece accused Turkey of encouraging a fresh surge of migrants into Europe.

Borrell made the comments as he visited the Maritsa border area, where scenes of clashes between migrants and Greek security forces were seen in March after Turkey said it would no longer prevent migrants from reaching the EU.

After accompanying Borrell to the border, Dendias said Turkey had "once again declared that its land borders to Europe are open" following a brief respite during the pandemic.

"At the same time, its coast guard escorts boats laden with migrants to the Greek islands," Dendias said.

"But it also persists in undermining security and stability, as well as peace, in the Eastern Mediterranean," he said.

Borrell said the EU was "determined to protect the EU's external borders and strongly support Greece's sovereignty," according to state news agency ANA.

"We share your concern; we discussed how we could stop the dynamics of escalation," Borrell added.

In late February, President Recep Tayyip Erdoğan said Turkey would not prevent migrants from crossing into the EU across its borders.

Thousands of migrants flocked to Greece, many gathering in the Maritsa border area or taking makeshift rafts to Greek islands.

For days, there were skirmishes on the border as migrants tried to break through, while Greek riot police responded by using excessive force.

Greece suspended access to seek asylum in March, in clear violation of the Universal Declaration of Human Rights and the EU Charter of Fundamental Rights, which guarantee the right to seek asylum.

Furthermore, at least two men were killed and a woman remains missing at the Turkish-Greek border after Greek border forces fired live ammunition and tear gas at asylum-seekers and other migrants struggling to cross to Europe, Amnesty International said in April.

Turkey has also frequently criticized the practices of Greek coast guards. The Turkish coast guard slammed its Greek counterpart for leaving migrants at sea helpless by pushing them back into Turkish waters, damaging their boat engines and sinking rubber dinghies.

Saying that the statements of Foreign Minister Dendias on the Aegean and the Eastern Mediterranean are completely disconnected from reality, Askoy also added that Greece, along with the Greek Cypriot administration, should wake up from the dream of confining Turkey to its shores and act consistently with international law.

“Attempts to set up evil alliances against Turkey and to use the EU for this aim would not be beneficial for Greece,” he said.

“Instead, they should respect the legitimate rights and interests of Turkey. Instead of solving their problems by complaining about us to others, they should try to solve them by talking to us. This is the requirement of international law and neighborhood," Aksoy said.

Turkey has consistently contested efforts by Greece and the Greek Cypriot administration to deny Turkey's territorial and energy exploration rights in the Eastern Mediterranean, asserting that Turkey and the Turkish Republic of Northern Cyprus (TRNC) also have rights to the resources in the area.