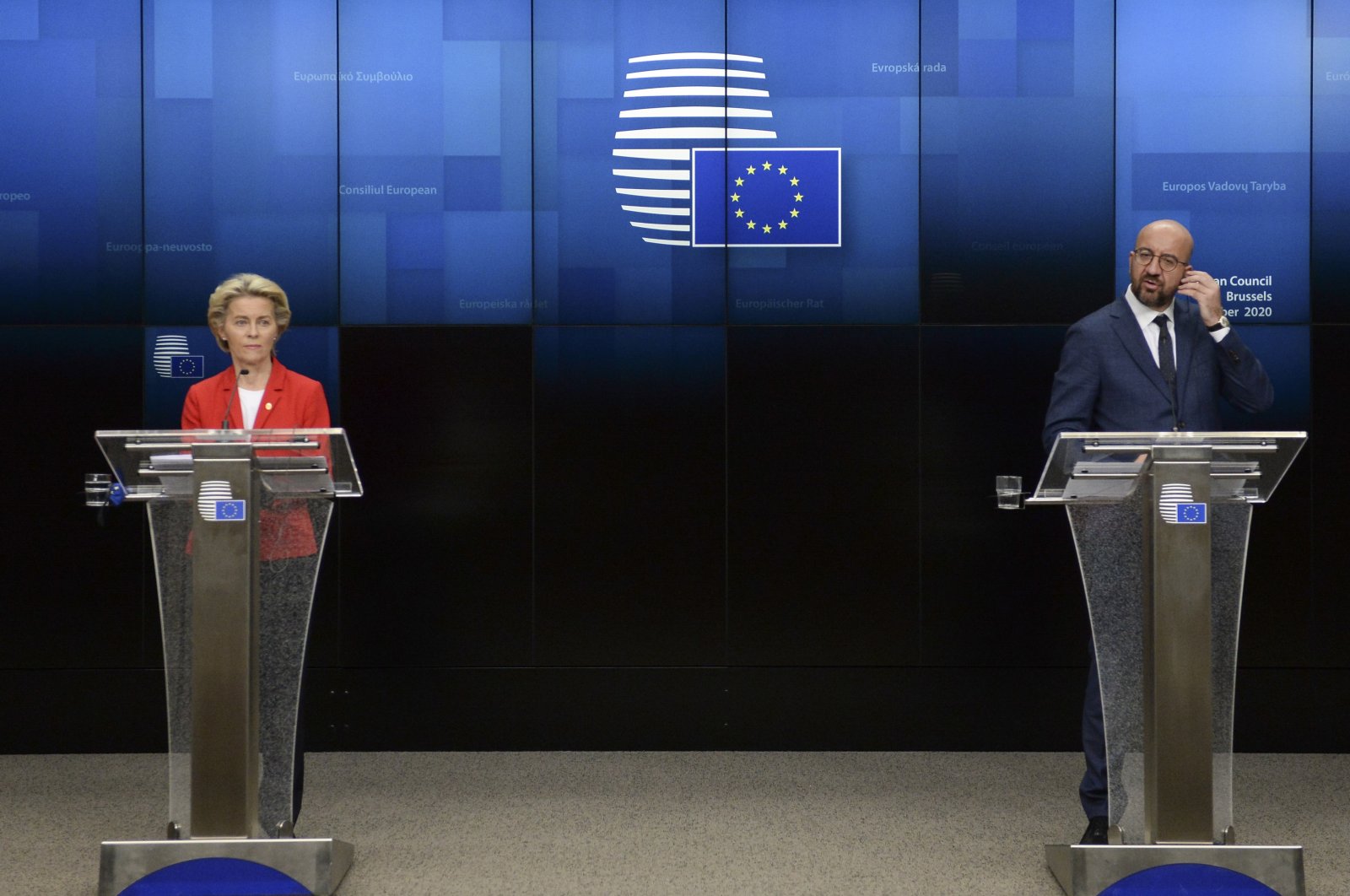 The European Union's decisions on Turkey, issued Friday, are not based on reality although they have some positive points, the Turkish Foreign Ministry said.

"The statement is an example of how some EU countries want to improve ties with our country while others have been taken as hostages by Greece and Greek Cypriots," the Foreign Ministry said Friday.

Emphasizing that the reference to the explanatory talks with Greece is a positive point, the Foreign Ministry corrected the EU statement by reiterating that the talks are not on the restrictions of the maritime borders but instead on all the problems that Turkey and Greece have.

"The fact that within the decisions there is no mention of Turkish Cypriots or a fair distribution of the hydrocarbon resources between the two sides shows that the EU's mentality to overlook the Turkish Cypriots resumes," the ministry added.

The ministry also reiterated that until the Cyprus crisis is resolved, the addressee of the Greek Cypriots is Turkish Cypriots, not Turkey.

"Thus, the EU should have called on Greek Cypriots to have talks with Turkish Cypriots, not Turkey," it said.

The ministry further expressed that it is not a constructive approach on the part of the EU to refer to Turkey's actions to protects its rights in the region as "illegal."

"The EU should realize now that it cannot reach anywhere with such rhetoric," the ministry said.

Tensions have been running high for weeks in the Eastern Mediterranean as Greece has disputed Turkey's energy exploration.

Turkey – the country with the longest coastline on the Eastern Mediterranean – sent out drillships to explore for energy on its continental shelf, asserting its own rights in the region as well as those of the Turkish Republic of Northern Cyprus (TRNC).

To reduce tensions, Ankara has called for dialogue and negotiations to ensure fair sharing of the region's resources.

Ankara not 'celebrates' the decision

During a joint press conference with his Italian counterpart Luigi Di Maio on Friday, Foreign Minister Mevlüt Çavuşoğlu also criticized the EU for its decision.

"Although we showed well intention in solving the East Med crisis, we are determined to protect and defend our rights in the region," he said.

"The EU’s decision on East Med was problematic. Turkey will be not celebrating the fact that EU did not impose any sanctions," Çavuşoğlu highlighted.

Speaking to Reuters following the statements, a Turkish official who requested anonymity said Friday that Turkey would be even more determined to protect its territorial rights in the Eastern Mediterranean if the EU decides on Friday to impose sanctions on it over offshore exploration.

The official said sanctions would not deter Turkey and suggested they could imperil dialogue planned as soon as this month between Ankara and Athens over disputed maritime boundaries and oil and gas rights.

But "if the EU applies sanctions, this will not deter us. On the contrary, this would increase our resolve and would be a negative stance on the part of the European Union," he said.

"We will continue our offshore program as we have been doing. Sanctions are not the right way (and) will not deter us to protect our rights to our continental shelf and also the rights of the Turkish Cypriots," he added.

EU leaders on Friday issued a declaration warning Turkey it must halt gas exploration activities in waters claimed by Greece and the Greek Cypriot administration and urging it to commit to talks.

The statement was agreed on by all 27 EU leaders after seven hours of haggling, with Greece and particularly the Greek Cypriot administration pushing for a tougher line while other countries argued for a more conciliatory approach toward Turkey.

European Council President Charles Michel said early Friday that the bloc agreed to adopt a two-way strategy toward Turkey and wants to give a chance to constructive political dialogue but warned that all options are on the table if that was not the case.

Speaking at a news conference following the EU leaders' summit, Michel said the main discussions of the gathering focused on the current situation in the Eastern Mediterranean and EU-Turkey relations along with sanctions on Belarus.

He said the EU pact encouraged political dialogue based on common interests but added that the EU offered full support for Greece and the Greek Cypriot administration and noted that the bloc expected Ankara to take positive steps.

According to Michel, the EU would rather have a positive agenda with Turkey, which it expects not to take any unilateral steps. He said the European pact also supports efforts to establish a dialogue between Athens and Ankara and the restart of Cyprus negotiations under the auspices of the United Nations.

Stating that the leaders taking part in the event suggested establishing a multilateral conference to resolve disputes in the Eastern Mediterranean, he added that the European Council would monitor developments and reevaluate the issue once again in December.

European Commission President Ursula Von der Leyen, also speaking at the news conference, said the European pact called for collaboration with Turkey based on a positive agenda, but she reiterated that the EU supported Greece and the Greek Cypriots.

She welcomed the start of a reliable dialogue between Athens and Ankara but noted that the EU regretted the latter's attitude toward the Greek Cypriot administration, which it does not recognize.

Von der Leyen warned that the EU would utilize all instruments and options should Turkey take unilateral actions, but the bloc did not prefer this, as positive relations would benefit both sides.

She noted that updating the customs union, improving commercial relations and cooperating in terms of migration should be on the agenda of both Turkey and the EU, especially at a time when the COVID-19 pandemic has inflicted a heavy blow on international trade.

According to the statement issued by the EU regarding the summit, EU foreign policy chief Josep Borrell was asked to organize a multilateral Eastern Mediterranean conference where multiple issues such as maritime jurisdiction areas, security, energy, migration and economic cooperation would be discussed. The participants, format and date are yet to be negotiated on.

Merkel: EU in favor of dialogue with Turkey

Later on Friday, German Chancellor Merkel said the EU wants to have constructive dialogue and a positive agenda with Turkey.

"EU summit is a 'window of opportunity' to closely cooperate with Turkey, upcoming talks to focus on modernizing Customs Union and visa liberalization," Merkel said, adding that the visa liberalization issue will be discussed on December.

According to the deal, Turkey was promised a total of 6 billion euros ($6.77 billion) in financial aid, which was initially designed to be given to the country in two stages and to be used by the Turkish government to finance projects for Syrian refugees. Visa freedom for Turkish citizens was also part of the agreement. In addition, the customs union between Turkey and the EU was to be updated.

In exchange for these promises, Turkey took the responsibility for discouraging migration through the Aegean Sea by taking stricter measures against human traffickers and improving the conditions of Syrian refugees living in Turkey. Despite significant developments controlling the migration traffic, the EU has not delivered on its commitments stated in the deal.

Kyriakos Mitsotakis said the EU had sent "a message of unity, solidarity, and determination" which left Turkey in no doubt that it must stop its "unilateral actions."

"It also made abundantly clear the consequences that will occur should Turkey continue its aggressive behavior," he said. "Greece is absolutely satisfied with the results of the summit."

Mitsotakis said Greece was looking forward to the resumption of the explanatory talks, which have been stalled since 2016.