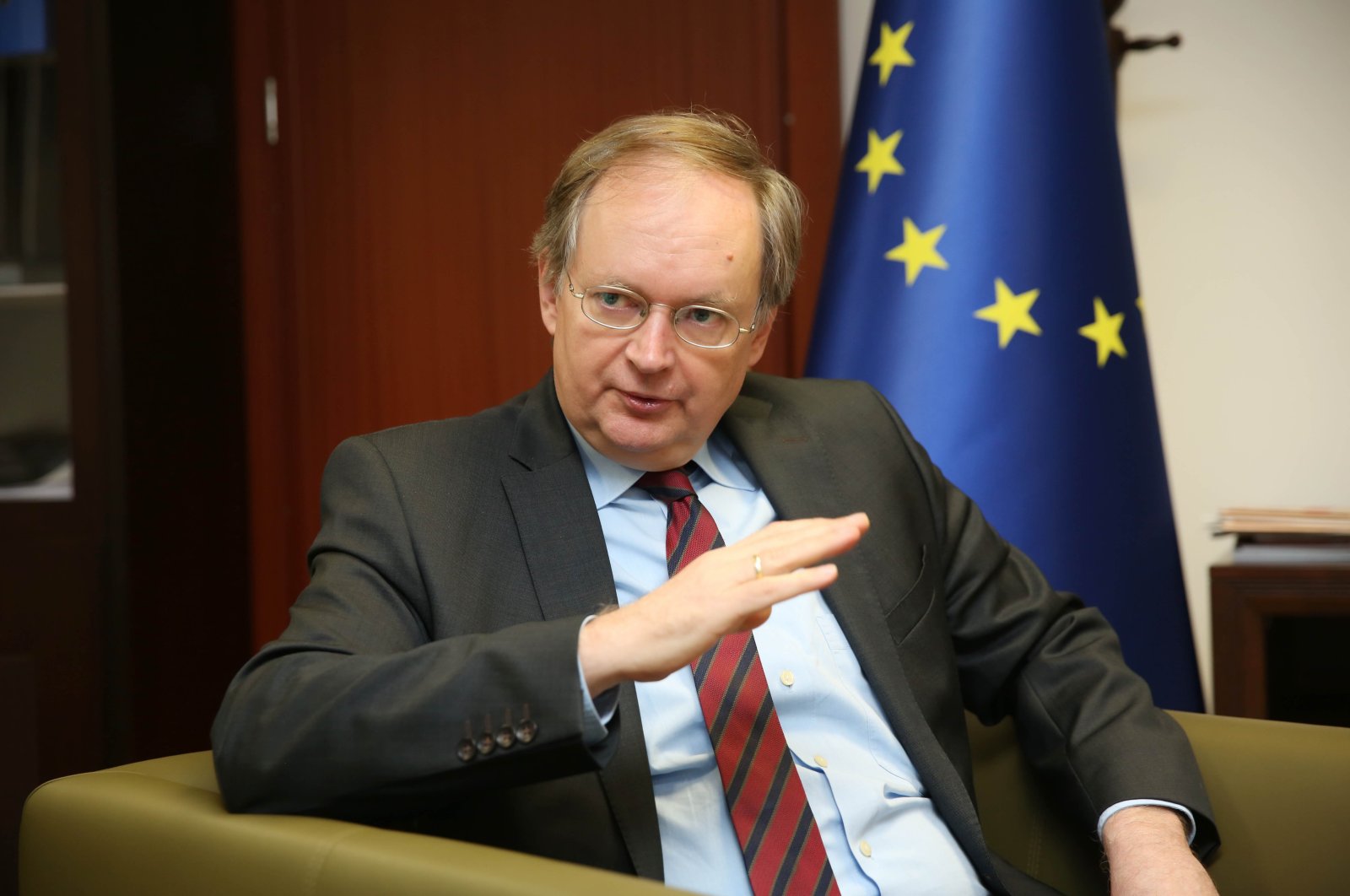 As the world struggles to fight the global pandemic, Turkey and the European Union have put emphasis on cooperation and solidarity to overcome the crisis and further their partnership in various fields

The world has to stand together as the global coronavirus pandemic spreads, the head of the delegation of the European Union to Turkey, Ambassador Christian Berger said, while he also pointed out that Turkey’s solidarity during this time of crisis has shown that Brussels and Ankara can work together to combat COVID-19.

In an exclusive interview with Daily Sabah, the ambassador elaborated on the EU’s cooperation with Turkey and the bloc’s next steps to take measures and prevent the further spread of the coronavirus as accession talks and the Syrian crisis also remain other areas of collaboration.

“What we see today in international relations or in relations with our immediate neighbors and candidate countries like Turkey, is that we need to stand together. This crisis is enormous, this crisis has hit us hard with enormous speed. Wherever you are, you find the same situation. Public life has almost come to a stop. For the first time, it is global; it is worldwide. If we want to overcome this, the world has to come together,” Berger said, stressing that funding research and finding a vaccine are now the top priorities.

After the outbreak of the coronavirus pandemic in China’s Wuhan in December, the virus spread around the world, with the U.S. and Europe the hardest-hit areas, crippling economies and bringing human interaction practically to a halt. Turkey last week attended the international Coronavirus Global Response conference hosted by the European Commission, which aims to create a pool for diagnostics, treatment and vaccines, and pledged to contribute.

“We were grateful for the participation of Turkey in this conference and the message of President (Recep Tayyip) Erdoğan. We appreciate this level of solidarity, which shows that we are standing together, working together, from Turkey and we are grateful for the donations to member states that were hit hard like Italy and Spain,” the ambassador stated. Berger further pointed out that this cooperation has to be a two-way approach: “Our research center, the Joint Research Center of the EU, also makes results (and) equipment available to Turkey.”

He also underlined that closer and better cooperation with Turkey in many aspects could be established, including in the field of research while making sure that trade between Turkey and the EU keeps flowing and medical equipment can be produced and purchased.

“Trade is the backbone of EU-Turkey relations,” Berger highlighted, saying that it is a very strong component.

The EU envoy pointed out that timing, the strength of the health system and a common approach as the main ingredients to best overcome the pandemic.

With timing, the development of the crisis is analyzed and the questions about how quickly the virus spreads, how quickly it can be contained, how the numbers, percentage of people infected or needing urgent care are and how the health system reacts to the crisis need to be answered, the ambassador said.

Saying that many countries were afraid not to be able to cope with the impact of the pandemic in the early days of the crisis, Berger stated, “COVID-19 is a stark reminder of how important solidarity is between peoples and countries.”

He pointed out that a proper European approach in consultation with immediate neighbors for a common framework is essential, taking into consideration that the disease is developing differently in different countries with distinct numbers, speed and health systems reacting diversely.

“We need to strengthen the resilience of our health system. Turkey has given a very good example; the Turkish health system actually has managed to deal with the crisis quite well, and this because it has a strong health system built over the years. When we look at how we can maintain our preparedness, our resilience, this is something we need to look into,” Berger stressed, saying that in the case of a second wave, Brussels has to make sure it is able to deal with it.

Turkey also plays an important role in the development and production of protective kits, the ambassador said. Some two-thirds of the world, especially those worst-hit, have requested medical supplies from Turkey to fight the coronavirus. So far, 64 countries have received medical aid, mainly medical masks, protective overalls and gloves, as well as disinfectants.

Commenting on the vital measures that need to be taken to gradually normalize and fight the virus, Berger said that many member countries are contemplating how to slowly restart their economies. “People cannot be without a work income for too long, that is a big concern of the European Union,” he noted.

The EU envoy said that Brussels launched an investment program supporting small- and medium-sized enterprises, while the commission has proposed to ease the budgetary and state procurement rules to put economies back on their feet as quickly as possible. The EU is also considering a support package for immediate neighbors, he added.

“This is a crisis of a magnitude I have never seen before,” Berger said.

The EU predicted “a recession of historic proportions this year” in a recent official forecast. The 27-nation EU economy is predicted to contract by 7.5% this year, before growing by about 6% in 2021. The group of 19 nations using the euro as their currency will see a record decline of 7.75% this year, and growth of 6.25% in 2021, the European Commission said in its spring economic forecast. The pandemic has hurt consumer spending, industrial output, investment, trade, capital flows and supply chains. It has also hit jobs.

Reminding of the Brussels meeting in March, attended by President Recep Tayyip Erdoğan, Berger said that the importance of this was that the EU and Turkey continue to discuss the issue and exchange views. He further mentioned that Josep Borrell, the head of EU foreign policy, and Foreign Minister Mevlüt Çavuşoğlu were tasked with follow-up talks.

“On visa liberation, we agreed with Turkey earlier on to have a certain number of criteria. A larger part of those criteria had been met, some of them not yet, and we understand that the ministries under the leadership of the foreign ministry are working on this to come up with a proposal on how these missing benchmarks can be fulfilled,” Berger said.

Turkey has a long history with the bloc and a long process of negotiations. The country signed an association agreement with the EU in 1964, which is usually regarded as a first step to eventually become a candidate. Applying for official candidacy in 1987, Turkey had to wait until 1999 to be granted the status of a candidate country. For the start of the negotiations, however, the country had to wait for another six years, until 2005, having a uniquely long process compared with other applicants.

Apart from the current coronavirus pandemic, which has been on the top of the agenda of both Turkey and the EU, the Syrian crisis remain another issue of cooperation and a problem yet to be solved, as the almost 10-year conflict has cost the lives of thousands and displaced millions fleeing from the violence of the Bashar Assad regime. The latest surge in violence occurred in Syria’s northwestern Idlib province as the Assad regime launched an offensive to recapture the last opposition bastion, displacing nearly a million people, according to U.N. numbers, and damaging half of the countries health infrastructure by bombing hospitals at a time when the Syrian people need them most.

“This is one of the longest conflicts in recent history we are dealing with and a tragic one not only for the people but for the entire country. When we deal with migration we actually deal with symptoms, not with the root cause. The root cause is the political situation in Syria. The European Union and Turkey, we have always been on the same line, and we remain to be on the same line,” Berger said.

Turkey currently hosts some 3.6 million Syrian refugees, more than any other country in the world, and has frequently warned of the deteriorating humanitarian situation in Syria and called for the international community to act. Ankara has so far spent $40 billion on the refugees, according to official figures.

Berger said the EU’s main strategy toward the Syrian crisis was to support both the people in Syria and refugees that have left the country, while also pushing for a political solution.

“We also have expressed very clearly the policy of nonengagement with the Assad government until there is a political breakthrough, until the legitimate aspirations, the legitimate rights of the Syrian people as stated in the Security Council,” the envoy said, adding that there are many components, from humanitarian to political support, to sanctions on the Syrian regime.

“I think we work with the same objective in mind as Turkey, to find a political solution and to end the conflict in Syria,” he said, noting that this cooperation on migration did not start with Syria and dated further back.

Referring to the influx of refugees Turkey received from Syria, Berger said, “Many municipalities, many cities had overnight an increase of population, they needed to care for water, electricity, infrastructure, health, education.” He gave the example of southern Kilis province, where there is double the number of Syrians than Turkish citizens.

The EU has prioritized financial incentives for education and language learning to avoid a lost generation in cooperation with Turkey, while it also established programs of vocational training and setting up businesses, especially for women entrepreneurs.

“These are all symptoms; it is not addressing the root cause. We all need to work together to solve this conflict,” the ambassador said.

On the occasion of Europe Day on Saturday, Berger voiced that he was happy to be in Turkey and to work with various institutions, ministries, nongovernmental organizations and the media.