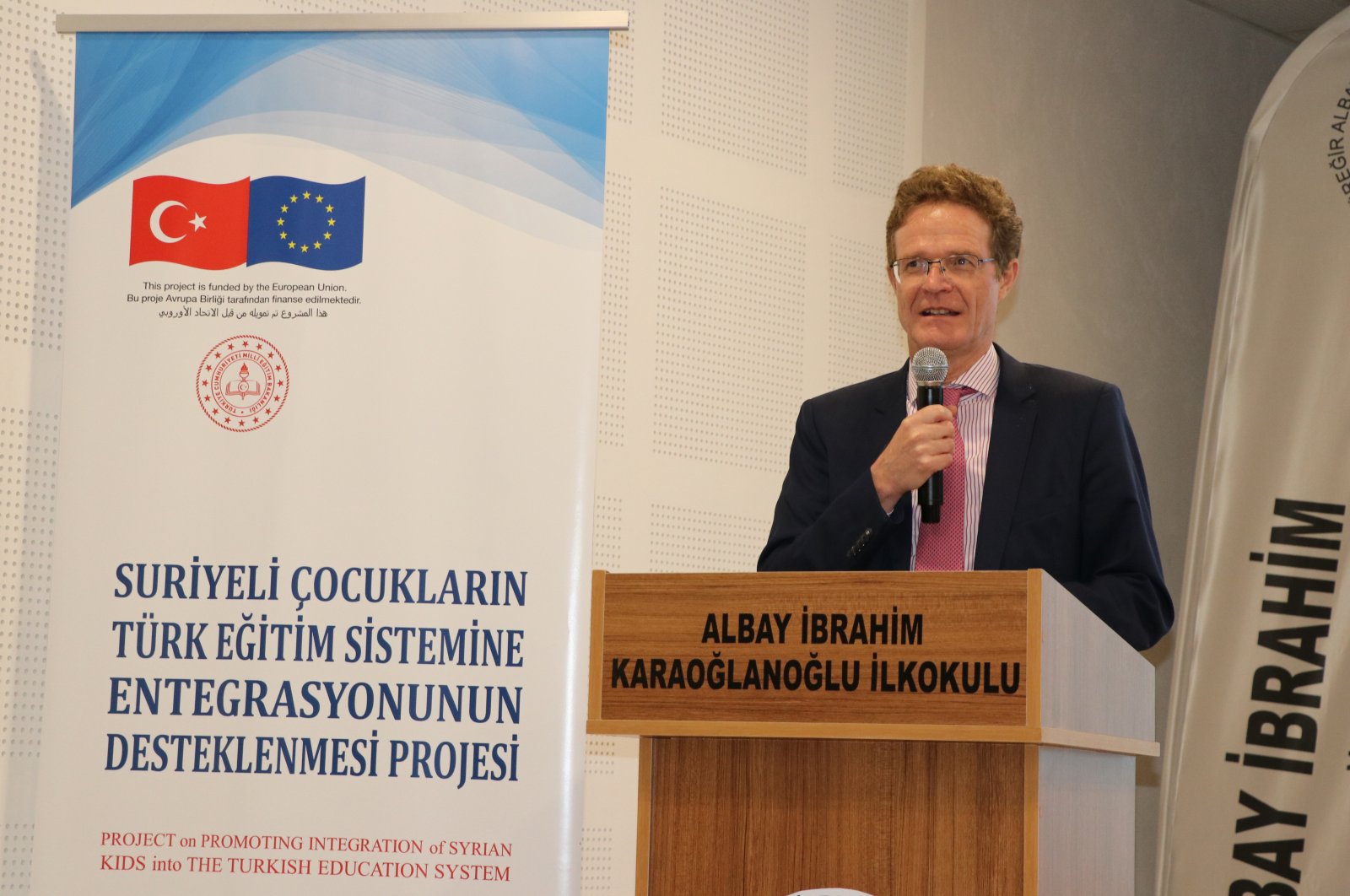 The European Union aims to increase cooperation and dialogue with Turkey, the bloc's envoy to Ankara stated, underlining that relations are at a critical phase ahead of the June EU Council summit

The European Union wants to intensify dialogue with Turkey on foreign policy issues and regional crises, Nikolaus Meyer-Landrut, head of the EU Delegation to Turkey stated.

“We are trying to turn the tide, to increase cooperation and to establish step by step – if the environment is conducive – a positive agenda. If the right steps are taken, if confidence is rebuilt perhaps further steps can be taken,” Meyer-Landrut told Daily Sabah in an exclusive interview during his two-day visit to southern Adana province.

Relations between the European Union and Turkey are at a critical point as the sides delicately attempt to set a positive agenda ahead of the June EU Council summit and the upcoming Cyprus talks, he said.

Speaking about the recent visit of the heads of the European Council and European Commission, Charles Michel and Ursula von der Leyen, on April 6, the delegation head said that, “There was a clear political commitment which von der Leyen also expressed, that the EU will continue to support Turkey and also Lebanon and Jordan to shoulder the burden of Syrian refugees.”

“At this stage, the commission is preparing a proposal and I hope that this will be on the table in the coming weeks or months. There are two dimensions to it, one is the timeframe while the other is to draw the right conclusions from our cooperation in this area in the last years,” Meyer-Landrut said, indicating that his visits around Turkey also serve this purpose.

“First of all, we have to look at the specific programs that we are financing and see whether we can improve them. The second point is that many refugees have now been in Turkey for as long as 10 years – as the needs of this population evolve, the need of the host community grows,” he pointed out, saying that people staying for longer periods of time require different things from municipal infrastructures than those staying shorter amounts of time.

He further stated that the consequences of the COVID-19 pandemic must also be taken into consideration, as it is not just an issue of health, it is also a socioeconomic issue for more vulnerable parts of society.

Meyer-Landrut highlighted that the European Council in March mandated that the commission begin work in several fields, including preparing a proposal for refugee assistance, identifying possible areas of cooperation in migration and preparing for a high-level discussion on climate and health issues.

“There are many issues on which progress can be made.”

“The European Council in June will reassess the situation and I think that at this stage further operational decisions as to the negotiations of the customs union or intensification of dialogues in areas like climate change or health can be taken,” he said.

On the issue of visa liberalization for Turkish citizens, the delegation head said there are still a number of benchmarks that were established during talks “where further progress from the Turkish side is required.”

When asked if visits from the EU side can be expected in the near future, Meyer-Landrut said: “Yes, the president of the commission has said that she wants, for example in the area of migration, to have relatively soon high-level contacts. This could lead to a visit.”

“Intensification of contact and exchanges is wanted,” the envoy stated.

Regarding the migration deal Brussels and Ankara struck in 2016, Meyer-Landrut said that “the fundamentals of the March 18 statement remain valid.”

“The question is to get practical progress in the different areas so that we can fill these things with life and take concrete decisions forward.”

On the tensions between Ankara and Athens over drilling rights and maritime borders in the Eastern Mediterranean, Meyer-Landrıt said that “we have seen renewed engagement between the two countries,” referring to exploratory and deconfliction talks the two NATO allies have been conducting.

“We think it is important we have exchanges at the political level. To put in place these diplomatic channels does not mean that the problem is solved but without these channels, you will never find diplomatic solutions.”

He said that the issues regarding Cyprus need to be addressed under the supervision of the U.N., while military deconfliction needs to be dealt with within NATO.

“Let’s give diplomacy a chance,” he stressed.

The foreign ministers of Greece and Turkey last week clashed on a wide range of issues during a heated news conference that underscored the troubled relationship between the historic rivals and the difficulties they have mending ties.

Touching upon the Cyprus talks that will be held on April 27-29, Meyer Landrut said that the main responsibility lies with the United Nations, “since it is a U.N.-sponsored process that has, after many contacts, led the secretary-general of the United Nations to call for this meeting to explore possible ways ahead.”

“Talks are important and the EU is supporting this,” he added.

“The outcome of the talks and the assessment we make about the outcomes will, of course, affect the general assessment about how conducive the environment is to progress,” he said.

“It is an important milestone between now and the next EU council.”

The Geneva talks will be attended by representatives of the TRNC and the Greek Cypriot administration, the three guarantor powers – Greece, Turkey and the United Kingdom – and the United Nations. They come after a hiatus of more than three years in negotiations designed to resolve the decadeslong division on the island.

The talks came at a frosty period in relations between Greece and Turkey over rights in the Mediterranean.

Turkey and the TRNC ruled out discussing a federal system to reunify the island, insisting that a two-state accord is the only way forward.

Cyprus has been mired in a decadeslong struggle between the Turkish and Greek Cypriots, despite a series of diplomatic efforts by the U.N. to achieve a comprehensive settlement.

The island has been divided since 1964 when ethnic attacks forced Turkish Cypriots to withdraw into enclaves for their safety. In 1974, a Greek Cypriot coup aiming at Greece's annexation led to Turkey's military intervention as a guarantor power.

The EU representative has been busy visiting several provinces across Turkey, most recently traveling to Adana.

Sharing his impressions, Meyer-Landrut said that it is interesting to see how the EU projects actually affect the lives of refugees, host communities and teachers.

“This time we focused on educational projects. You can see how important education is, how difficult it is, how huge the effort is to get more than 700,000 Syrian kids into the official school system. It is fascinating to see how dedicated the teachers and, how much engagement there is. One can see on their faces that they are happy – this is a huge reward,” he said.

Meyer-Landrut visited the mayor, the governor and different schools, including vocational training facilities, primary schools and prefabricated schools in the province.

He also announced that the EU will prolong Turkey's Promoting Integration of Syrian Kids into the Education System (PIKTES) to next year, a decision welcomed by the PIKTES teachers.

Implemented by the Ministry of Education, PIKTES aims to help children under temporary protection access education. PIKTES is funded by a direct EU grant within the scope of the “Facility for Refugees in Turkey (FRIT)” agreement. The project was launched on Oct. 3, 2016, and is still operational in 26 provinces. The EU’s PIKTES covers over 750,000 Syrian students, with the number of students enrolled increasing every school year, while also supporting at least 3,250 teachers.

During the visit, Meyer-Landrut expressed how impressed he was by how well the Turkish people, state and provinces host and support refugees, adding that the EU will continue its support.

He added that by traveling around the country, one sees that each city has its own character, comparing the city of Mardin, which he visited last week, to Adana.

"You learn to see the size of the country, the difference in the history and the composition of the population in the different provinces,” Meyer-Landrut said, noting that the provinces close to the border in the southeast in particular especially face challenges.

The EU envoy also underlined that empowering women remains one of the bloc’s priorities.

He expressed that women having access to education is as important across the world, as it is in Turkey.

“Education is the best approach. It will help young girls to have self-confidence, to be self-reliant, to learn that they can stand on their own feet,” he said.

“In terms of projects, we will always try to incorporate this dimension into different projects we are proposing and supporting,” Meyer-Landrut said, underlining that these projects are carried out in cooperation with the Turkish government.

Voicing concern about Turkey’s withdrawal from the Istanbul Convention, which aims to combat violence against women, Meyer-Landrut highlighted that human rights must be protected.

“Unfortunately, across the world, we have seen that during the pandemic, the tendency of violence against women increased. It is not the time to relax, it is something which is of particular importance in this moment when we force people to stay at home and do not know what happens.”