'EU to take all necessary measures to prevent illegal crossings' 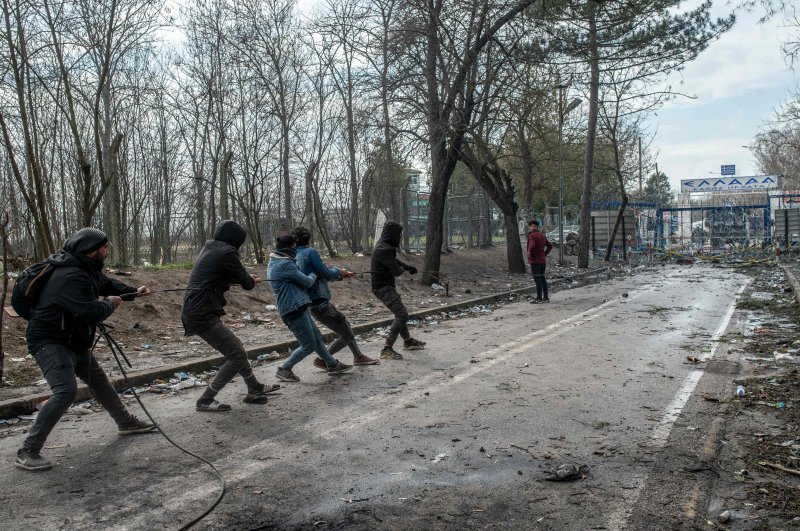 Migrants try to remove fences during the clashes with Greek police, after they tried to pass on the Greek side, on the buffer zone near Pazarkule crossing gate in Edirne, Turkey, on March 4, 2020. (AFP Photo)
by Compiled from Wire Services Mar 05, 2020 11:46 am
RECOMMENDED

The European Union on Wednesday reiterated that the bloc will take all necessary measures to prevent illegal crossings through its borders.

In a joint statement by ministers meeting in Brussels, the representatives of 27 capitals said the "situation at the EU's external borders is not acceptable."

"Illegal crossings will not be tolerated," the statement said.

"In this regard, the EU and its member states will take all necessary measures, in accordance with EU and international law. Migrants should not be encouraged to endanger their lives by attempting illegal crossings by land or sea,” it added.

Ankara wants Brussels to step up support for refugees from Syria and Turkey's increasingly intense confrontation with the Damascus regime.

But EU members insist Turkey must stick to a previous deal in which it agreed to prevent refugees and migrants from crossing to Greece.

The EU also announced that it will allocate an additional 170 million euros ($189.8 million) in aid for the most vulnerable groups in war-torn Syria, EU foreign policy chief Josep Borrell said Wednesday.

“We have announced an addition 170 million euros in humanitarian aid to continue assisting the most vulnerable people in Syria,” Borrell told a press conference before departing from Ankara Esenboğa Airport following a two-day visit to Turkey.

He noted that 60 million euros ($67 million) of the aid would be used to address the humanitarian crisis in northwestern Syria.

Earlier in the day, Turkish Vice President Fuat Oktay received Borrell and an accompanying delegation to discuss recent developments in Syria, including the humanitarian crisis in Idlib province and the situation of refugees waiting on the Turkish-Greek border.

Borrell said he had many meetings with Turkish authorities during his visit, noting his meeting with President Recep Tayyip Erdoğan was also a fruitful one.

“In our meetings, I had the opportunity to express our understanding of the difficult situation Turkey is currently facing but also stress that current developments on European borders are not leading to any solution,” Borrell said, adding the situation is not benefiting anyone and may get worse.

“The ones who will pay the price are the people – the Syrian refugees and the migrants,” he said.

Borrell said during the meetings, he noted that an end to the conflict in Syria would benefit both Turkey and the EU.

“We need to work hand in hand to address the common challenges,” he said, urging cooperation to find a way to end the crisis.

“The situation is dramatic. The humanitarian consequences of military escalation are extremely grave,” Borrell stressed.

He said they discussed reducing tensions and not encouraging further movement of refugees toward EU borders while noting that contacts at the highest level will continue and he will also discuss cooperation with Turkey during his meetings with EU foreign ministers in Zagreb, Croatia.

He noted that during their talks, Erdoğan told him that Turkey does not encourage refugees to head to the borders, “but we cannot prevent people from doing so.”

“But we have to try to avoid by all means (a situation where) people believe the doors are open,” he said, adding they should not be misled because taking risky journeys to other countries may bring many other problems along with it.

Thousands of refugees flocked to Turkey's Pazarkule border crossing to Greece after Turkish officials announced last week that they would no longer try to stop refugees from reaching Europe.

It followed an attack last week by Syrian regime forces on Turkish troops in Idlib in which at least 36 soldiers were killed.

Turkey already hosts some 3.7 million refugees from Syria alone, more than any other country in the world.

Touching on a 2016 deal between Turkey and the EU which was aimed at stopping irregular migration through the Aegean Sea and improving the conditions of more than 3 million Syrian refugees in Turkey, Borrell said “the 2016 package was not only a matter of providing financial help to take care of the migrants on Turkish soil.”

He said it also included other issues such as visa liberalization and modernization of the customs union and noted that most of them are yet to be fulfilled.

He said under the deal, the EU pledged 6 billion euros ($6.7 billion) in funding to support projects for Syrian refugees in Turkey.

Turkish politicians have recently criticized EU member states for not fully implementing the deal and for backing away from their political commitments.

He noted that the current situation requires their support and cooperation as the situation in northwestern Idlib, Syria, was not foreseen in 2016.