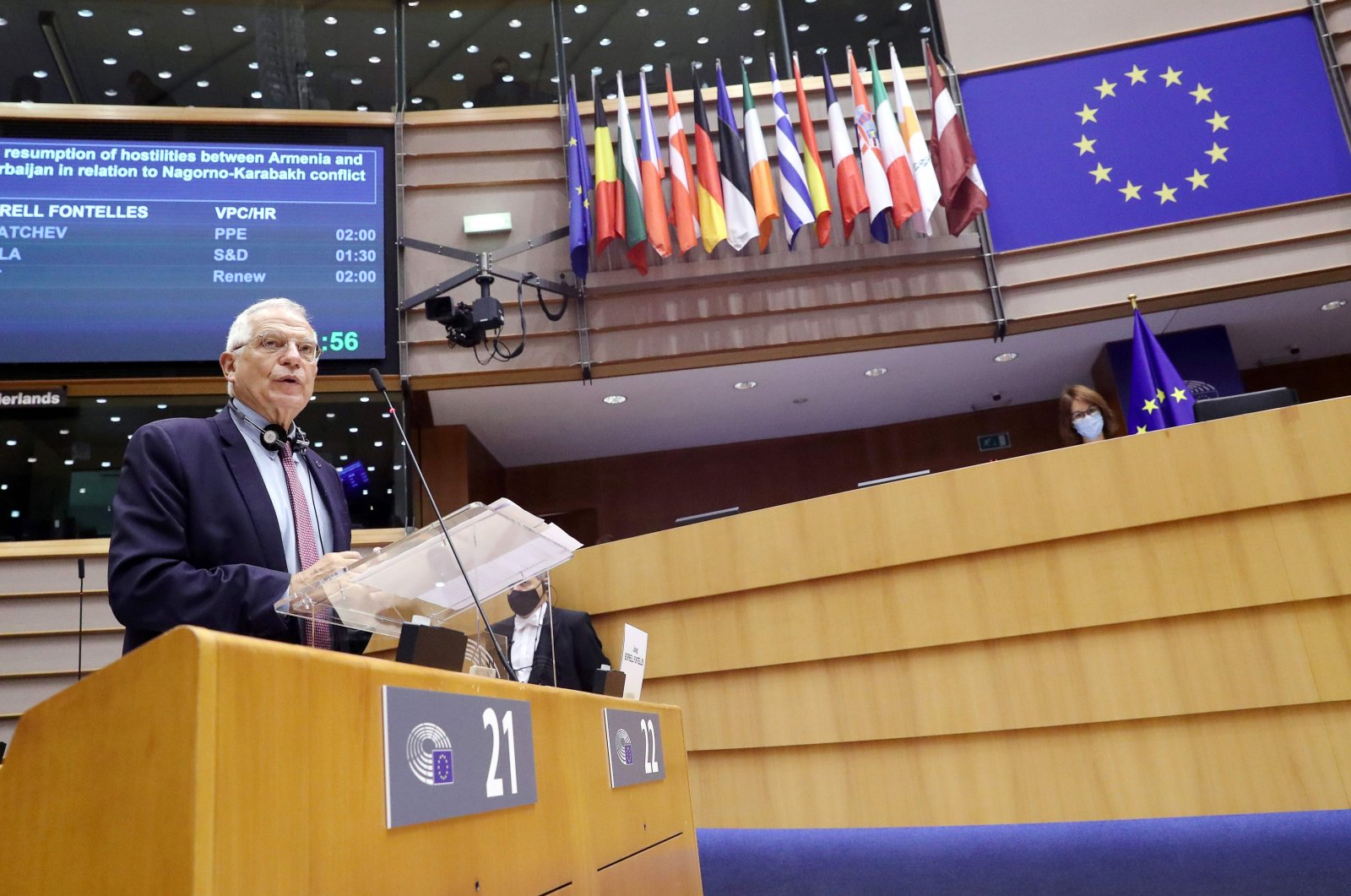 High Representative of the Union for Foreign Affairs and Security Policy Josep Borrell speaks during a plenary session of the European Parliament in Brussels, Belgium, Oct. 7, 2020. (AFP Photo)
by DAILY SABAH WITH AA Oct 07, 2020 3:18 pm
RECOMMENDED

The European Union will keep working with Turkey in order to help settle conflicts and stop hostilities, such as those between Armenia and Azerbaijan, the EU foreign policy chief said Wednesday.

Responding to an EU parliamentarian's repeated demands that the EU "act" against Turkey over its alleged involvement in the Nagorno-Karabakh conflict, Josep Borrell said, "We will remind the two sides of the obligation to protect civilians on the (basis of) international humanitarian law, and also keep working with Turkey."

But he clarified, "If you mean by ‘act,' taking military action, it is completely out of the question."

Borrell said he found it concerning to hear Turkish Foreign Minister Mevlüt Çavuşoğlu on Tuesday expressing full support to Azerbaijan during a visit as well as Ceyhun Bayramov, Azerbaijan's foreign minister, saying Armenia must withdraw its occupying troops before the two sides can begin talks.

But he added that the EU will do whatever it can do within diplomatic reason, pointing to the Organization for Security and Co-operation in Europe (OSCE) Minsk Group.

The EU also called on Armenia and Azerbaijan to engage in "meaningful" negotiations to resolve the Nagorno-Karabakh conflict.

"Both sides need to engage in meaningful negotiations, which by the way had been not very fruitful in the last 30 years, without preconditions under the OSCE Minsk Group Co-Chairs," Borrell said during his speech at the European Parliament plenary session.

Borrell said the EU's position is clear on Nagorno-Karabakh, which is "the fighting must stop," urging both sides to start dialogue immediately.

"The war is not an alternative. We have to push both parts to start negotiating without preconditioning," he said.

The top EU diplomat said he recently spoke to the foreign ministers of Azerbaijan and Armenia, as well as with his Turkish and Russian counterparts, emphasizing the importance of de-escalation.

Borrell warned against attacks on areas with civil populations, saying, "We have seen extremely worrying reports of a surge in attacks on populated areas, which is taking a deadly toll on civilians."

He called on both sides to fulfill their international obligations to protect civilians.

Borrell touched on misinformation coming out of the conflict zone, saying that the reports need to be examined with "great precaution."

The ongoing clashes began on Sept. 27, when Armenian forces targeted civilian Azerbaijani settlements and military positions in the region, leading to casualties.

The OSCE Minsk Group, co-chaired by France, Russia and the U.S., was formed in 1992 to find a peaceful solution to the conflict, but to no avail. A cease-fire, however, was reached in 1994.

Several countries, including Russia, France and the U.S., have urged an immediate cease-fire. Turkey, meanwhile, has supported Baku's right to self-defense.