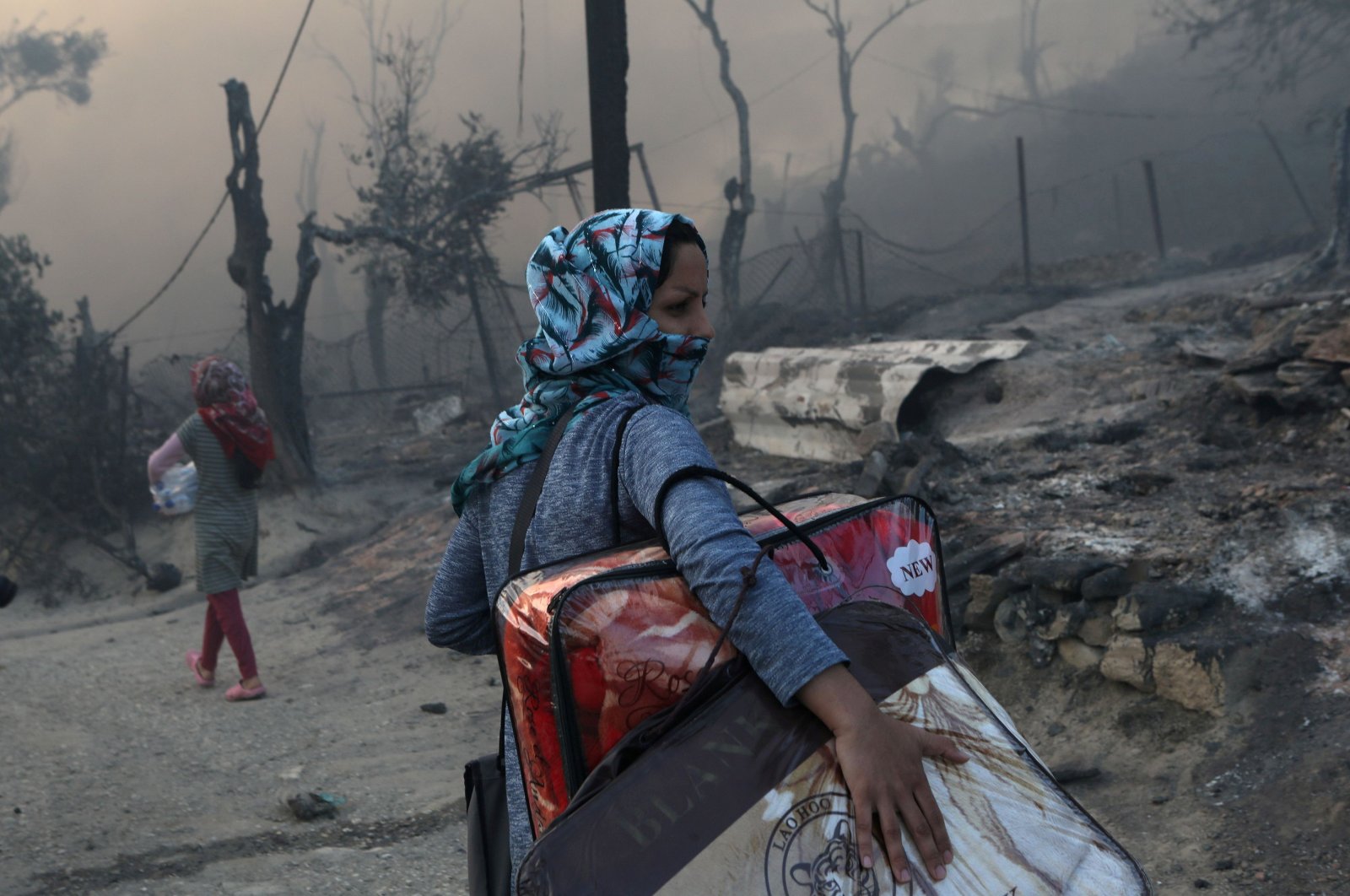 A migrant carries her belongings following a fire at the Moria camp for refugees and migrants on the island of Lesbos, Greece, Sept. 9, 2020. (Reuters Photo)
by Daily Sabah with AA
Nov 20, 2020 9:24 am

The conditions in which migrants and refugees are held in Greece's detention facilities are inhumane and degrading, the European Committee for the Prevention of Torture and Inhuman or Degrading Treatment or Punishment (CPT) said in a report Thursday.

A visit by committee officials to the country's facilities on March 13-17 this year revealed that the conditions in these facilities, specifically in the Meriç (Evros) region and on the island of Samos, are inhumane.

Despite the nation facing significant challenges due to dealing with large numbers of migrants, the committee noted, "this cannot absolve the Greek State from their human rights obligations and the duty of care owed to all migrants that the Greek authorities detain."

According to the report, migrants are being held in overcrowded detention centers that are without personal hygiene products, have broken toilets and washrooms, have poor lighting or ventilation and do not provide access to outdoor exercise.

Conditions for migrants with children, pregnant women, unaccompanied children and vulnerable people either with disabilities or mental health issues are also degrading, the statement continued.

In addition, several allegations have also been reported by the CPT on the ill-treatment of migrants detained by the police or coast guard.

"The CPT's delegation received ... a number of allegations by migrants that they had been subjected to slaps to the head and kicks and truncheon blows to the body by members of the Hellenic Police and Coast Guard. In a few cases, those allegations were supported by medical evidence," the report said.

The CPT has called on Greek officials to end the mistreatment of migrants and transfer unaccompanied children to reception facilities.

Despite the Greek government denying the illegal rejection of thousands of migrants and asylum-seekers trying to reach its shores, evidence received by the CPT showed migrants being pushed back across the Meriç river border with Turkey.

Evidence collected by the watchdog showed that the European Border and Coast Guard Agency (Frontex) is aware of these acts.

Concerns over the agency's involvement have prompted the management board to call for an investigation, despite several media outlets saying that Frontex was actually involved in the pushbacks, Eva Cosse, a researcher at HRW, told Anadolu Agency (AA).

Numerous reports by journalists, researchers and witnesses have cataloged the way in which migrants and asylum-seekers have been forced back across the border to Turkey or left stranded in the Aegean Sea without aid by Greece's coast guard, despite the conservative government's denials in Athens.

In September, Oxfam and activist movement WeMove Europe filed a complaint with the European Commission calling for an investigation into Greece's alleged violations of asylum-seekers' rights.

Pushbacks are considered contrary to international refugee protection agreements. Under the principle of “non-refoulement,” people should not be expelled or returned to a country where their life and safety might be in danger due to their race, religion, nationality or membership in a social or political group.

Turkey, which hosts over 3.5 million migrants, has also accused Greece of large-scale pushbacks and summary deportations without access to asylum procedures, which is a violation of international law. It also accuses the European Union of turning a blind eye to what it says is a blatant abuse of human rights.