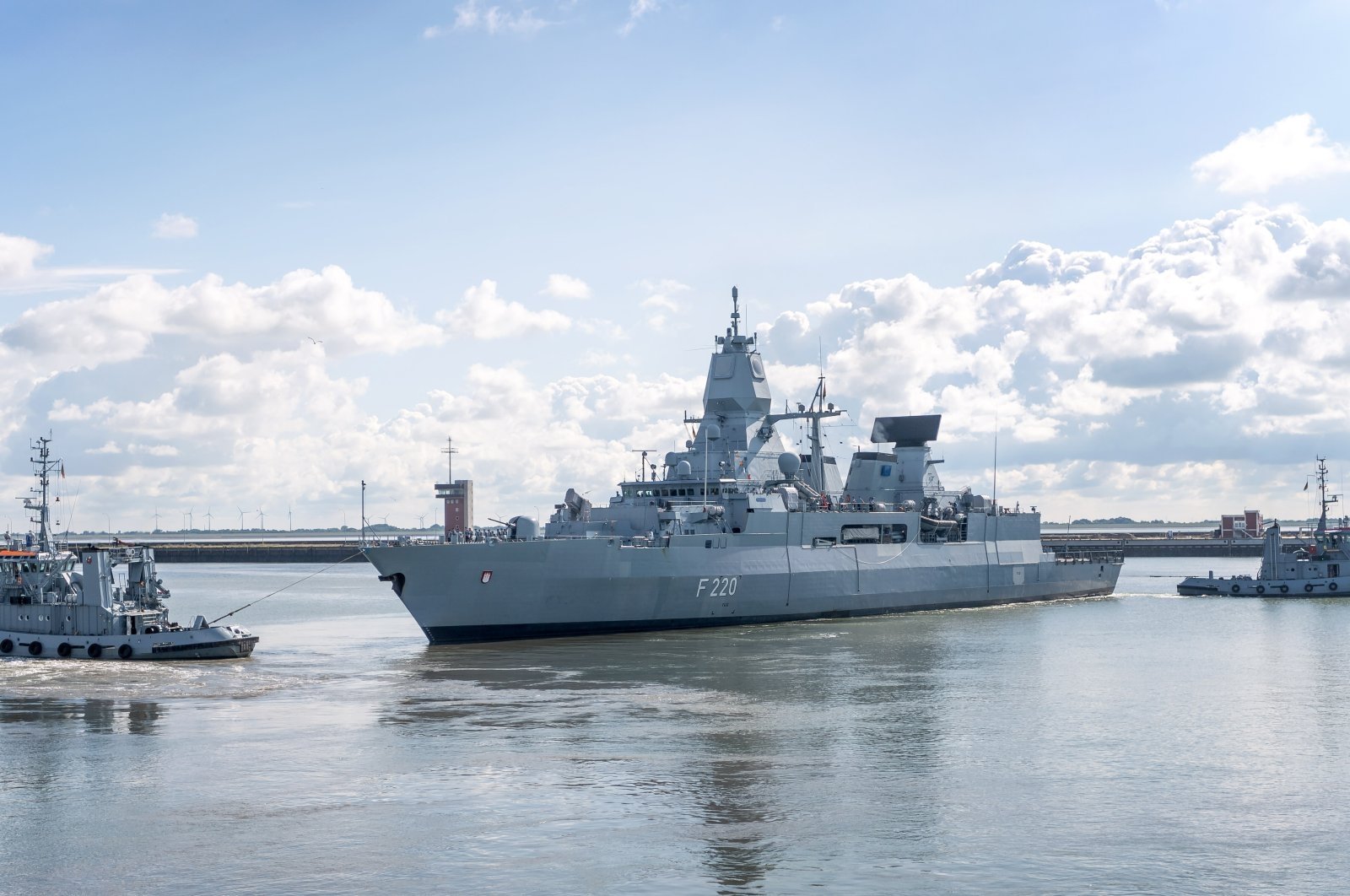 The frigate "Hamburg" runs out of the harbor for a five-month Mediterranean mission as part of the European Union's Irini operation, Lower Saxony, Wilhelmshaven, Aug. 4, 2020. (Photo by Getty Images)
by DAILY SABAH Dec 02, 2020 1:04 pm
RECOMMENDED

The European Union’s Operation Irini is a tool the bloc is using against Turkey, Foreign Minister Mevlüt Çavuşoğlu said Wednesday while also criticizing the exploitation of the so-called EU solidarity.

Speaking at the fourth TRT World Forum’s session, “New Realities in Foreign Affairs and Interstate Relations after Covid-19," Çavuşoğlu said that the recent actions the Irini mission carried out against a Turkish ship were a clear violation of international law.

"The Irini operation has recently been used as an instrument against Turkey. The operation on Nov. 22 ordered a raid on a Turkish commercial vessel without our prior authorization,” he explained. "We harshly protest this unlawful action. The U.N. Security Council's decisions on the arms embargo on Libya do not invalidate the freedom of navigation. We reserve our right to apply to every legal and legitimate instrument for a response."

On Nov. 22, soldiers from a German frigate working under the EU's Operation Irini boarded and inspected Roseline A, in a move that drew sharp condemnation from Turkey. According to the law of the sea, the consent of the flag state must be obtained before personnel may board the ship in order to conduct their search. Despite being warned that Turkey did not give its blessing, the Hamburg Frigate's soldiers searched the merchant cargo vessel and found that it was carrying humanitarian aid, food and paint.

Operation Irini, which was approved by EU foreign ministers on March 31, aims to operate in the air and sea and with satellites to ensure that all countries respect a ban on providing arms to the parties involved in the Libyan conflict. Seven countries are participating in Operation Irini, named after the Greek word for peace, including Italy, Greece, France, Germany, Poland, Malta and Luxembourg, with frigates and maritime patrol aircraft.

Although the operation aims to enforce the U.N. arms embargo on Libya’s warring sides, it mainly focuses on maritime activities in the Mediterranean, while putschist Gen. Khalifa Haftar, the enemy of the legitimate Libyan Government of National Accord (GNA), continues to receive arms and ammunition mainly by air and land, according to Libyan Prime Minister Fayez Sarraj. Russia and the United Arab Emirates (UAE) have been providing arms and military equipment to Haftar’s forces, which are also backed by Egypt and France.

Çavuşoğlu added that some nations take advantage of the solidarity among EU members, referencing how Greece and the Greek Cypriot administration use their position within the bloc to impose their unilateral and maximalist approaches.

“We frequently see how EU solidarity is exploited in order to support the nationalist agenda of these members (Greece and the Greek Cypriot administration) ... In every situation, we are ready for dialogue and cooperation in the Eastern Mediterranean. For this reason, we made a call for a regional Eastern Mediterranean conference with the participation of all coastal countries in the region, including the Turkish Cypriots,” he explained.

Despite such negative developments, Turkey continues to see itself as a strong NATO ally and as having its future within the EU, Çavuşoğlu said, reiterating President Recep Tayyip Erdoğan's statements from last week.

Turkey, which has the longest continental coastline in the Eastern Mediterranean, has rejected the maritime boundary claims of Greece and the Greek Cypriot administration, stressing that these excessive assertions violate the sovereign rights of both Turkey and the Turkish Cypriots.

This year’s TRT World Forum 2020, held by public broadcaster TRT’s English-language service, was held online on Tuesday and Wednesday due to the coronavirus pandemic, under the theme “Shifting Dynamics: The International Order in a Post-Pandemic World.”