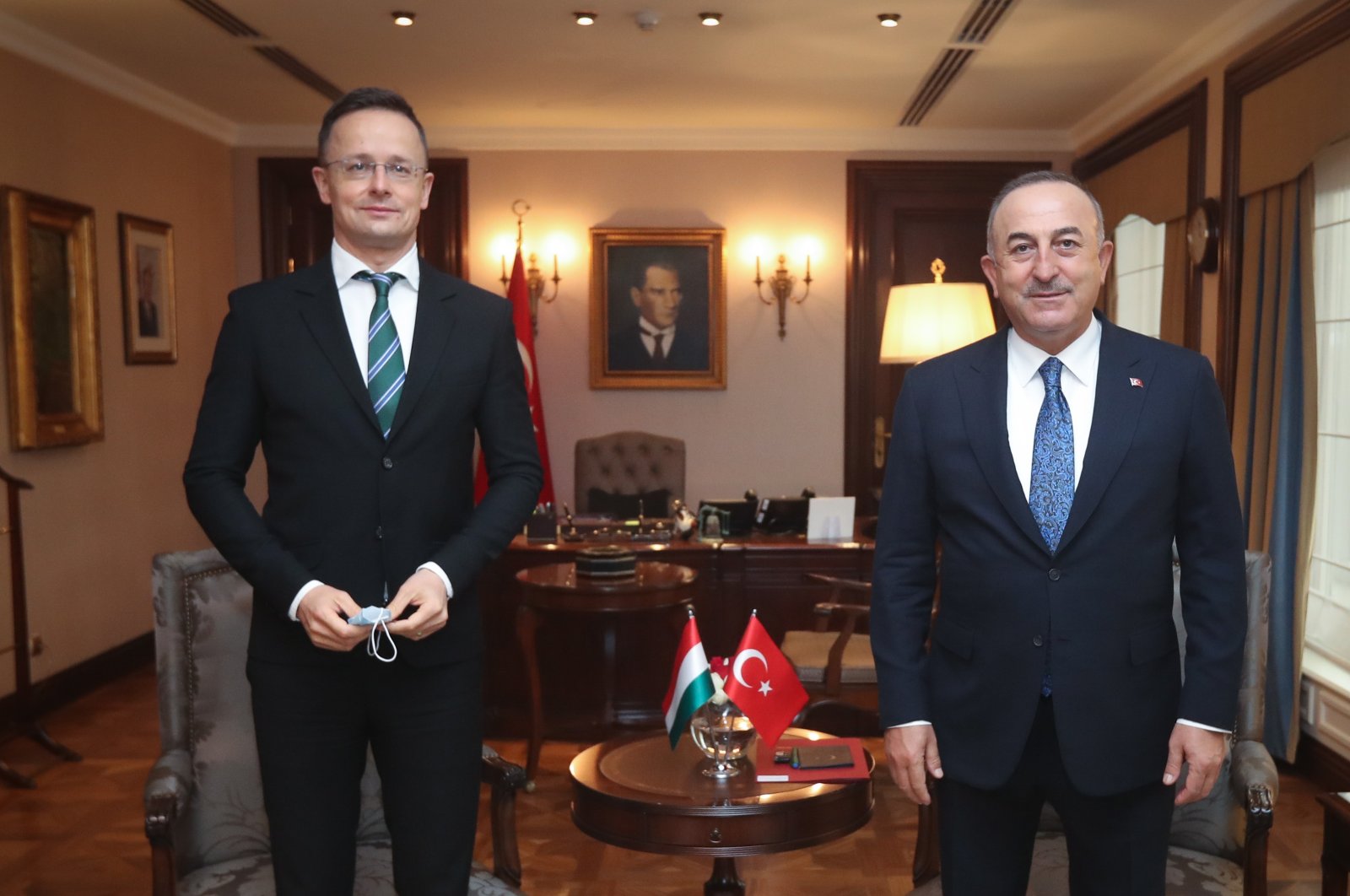 Top Turkish and Hungarian diplomats urged the EU to forgo double standards as Foreign Minister Çavuşoğlu, ahead of a critical meeting in Brussels, reiterated calls to build positive relations with the bloc and solve the Eastern Mediterranean dispute through dialogue

The European Union’s security depends heavily on Turkey, Hungarian Foreign Minister Peter Szijjarto stated Tuesday, underlining that Ankara is a strategic partner to the EU in many fields.

Speaking at a joint press conference with Foreign Minister Mevlüt Çavuşoğlu, Szijjarto stated that cooperation between the EU and Turkey should be maintained and that Hungary is ready to help establish a dialogue between Ankara and the bloc. He said the EU owes thanks to Turkey for hosting more than 4 million migrants; if it were not for Turkey, hundreds of thousands of migrants would end up at the borders of the EU and pour into the Balkans.

Besides bilateral relations, Çavuşoğlu said, regional issues on the EU agenda were also discussed in a meeting with his Hungarian counterpart. Szijjarto visited Turkey after he attended the EU foreign ministers' meeting the day before in Brussels. EU leaders will discuss the future of Turkey-EU relations at a summit this week.

Hungary supports Turkey’s EU accession and further improvement of Turkey-EU relations and is a friendly country that contributes to the process, Çavuşoğlu said.

“We want to enhance our relations with the EU,” Çavuşoğlu reiterated, saying that relations have had their ups and downs originating from both Ankara and Brussels but that effort is needed to overcome problems with dialogue.

He reiterated that the EU, whether right or wrong, supports member states in the name of solidarity and that it is wrong to differentiate between an EU member country and a country that is in an accession process with the bloc. Turkey’s top diplomat underlined that the EU must take on the role of an honest mediator in resolving problems with Greece.

Szijjarto stressed that the range of disputes between Turkey and the EU should be left behind and that the bloc should act with mutual respect in line with international laws. “We should do away with double standards and hypocrisy,” Szijjarto said, indicating that Hungary works to ensure dialogue between Turkey and some EU member states in disputes with Ankara.

Çavuşoğlu, on the other hand, stated that Greece has stopped participating in NATO meetings despite "our well-intentioned steps."

Greece is hindering a NATO-led mechanism to resolve tensions and conflict in the Eastern Mediterranean by refusing to attend talks, security sources said last week. NATO announced in September that, following a series of technical meetings between the military delegations of Greece and Turkey at NATO headquarters in Brussels, a bilateral military deconfliction mechanism was to be established.

The mechanism was designed to reduce the risk of incidents and accidents in the Eastern Mediterranean and includes the creation of a hotline between Athens and Ankara to facilitate resolving conflicts at sea or air; however, it could not be advanced due to Greece's refusal to participate.

Çavuşoğlu added that Greece engaged in provocative acts and escalating behavior in the region. He said that though Greece wanted the precondition that Turkey’s Oruç Reis seismic research vessel halt its operations to enter dialogue, no positive step came from Athens when the vessel returned to the southern port of Antalya from Mediterranean waters last week.

Turkey withdrew the Oruç Reis from contested waters ahead of a previous EU summit in October to allow for diplomatic talks.

“Now they are coming up with other excuses,” Çavuşoğlu underlined, saying that the EU has to be honest, stop accusing Turkey of misconduct and be fair not only during the upcoming meeting but also regarding general relations.

"This attitude of Greece should be realized by the EU as well. Still, we believe dialogue is the only way to solve the Eastern Mediterranean dispute," he said.

Greece, with France's support, has disputed Turkey's energy exploration, trying to box in its maritime territory based on small islands near the Turkish coast.