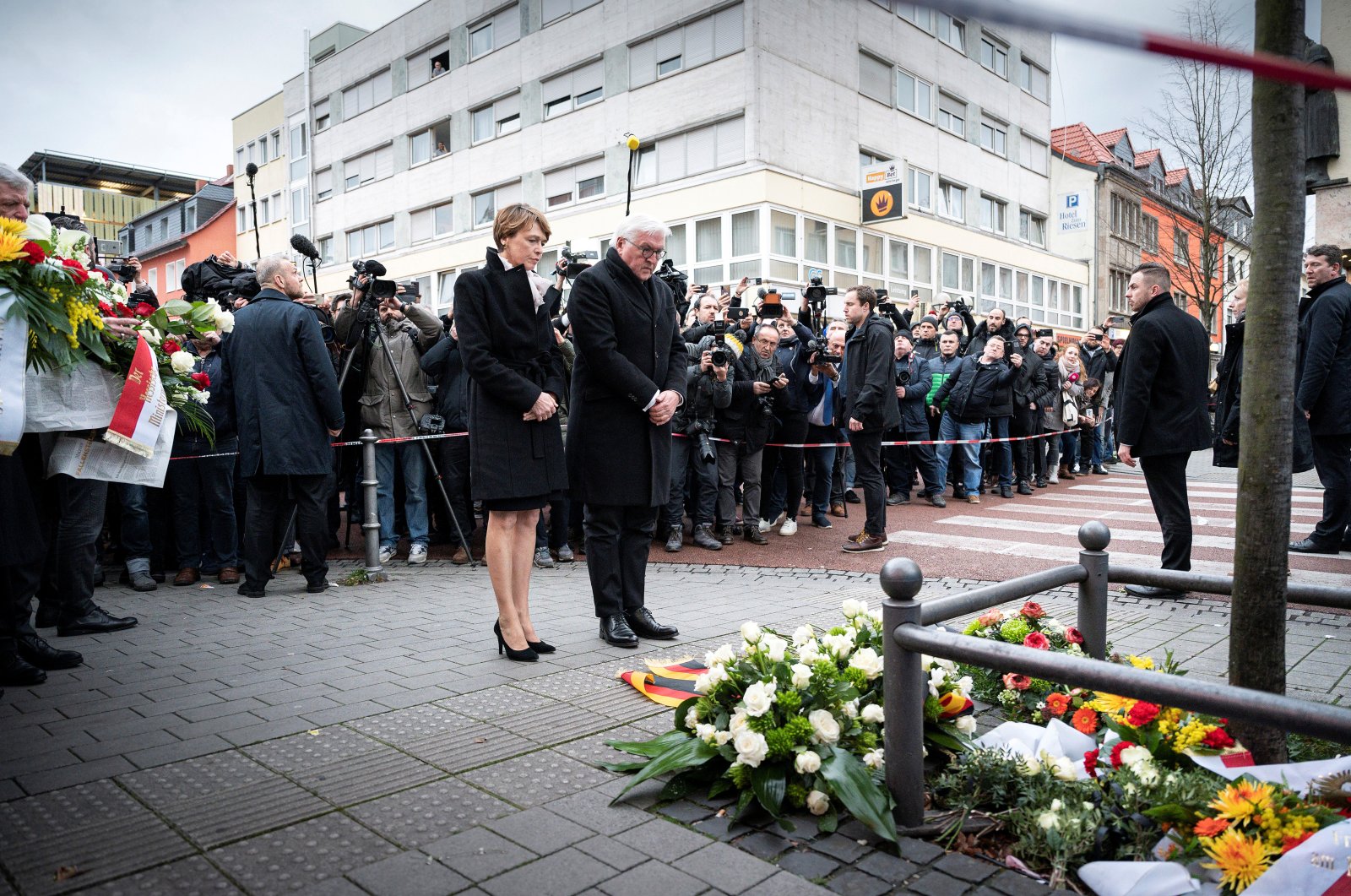 German President Frank-Walter Steinmeier and his wife Elke Budenbender pay respect to victims of a shooting in Hanau, near Frankfurt, Germany, February 20, 2020. (REUTERS Photo)
by Daily Sabah with AA Apr 13, 2020 11:24 am
RECOMMENDED

Far-right groups in Germany threatened the chairman of Turkey’s state-run Yunus Emre Institute, which is charged with promoting Turkish language and culture around the globe, in the capital Berlin.

Speaking to Anadolu Agency (AA), Feyzullah Bahçi, who has been carrying out his duties in Berlin for two years, said that a letter with racist language was placed on his car’s window. Bahçi found the letter when he got in his car to go shopping on Saturday.

“When I took the letter, I saw that it was a threat letter. When I looked at other parts of the car, I realized there were scratches on the hood and windows,” he said.

Bahçi said he called the police but officials responded that they could not send anyone and that he should make his complaint through the internet. He added: “Although I said that this was the third time my car was scratched and this time I also received a threat letter, they said that there is nothing they can do. Then, I made an online complaint and went to a police station by putting the letter in a sheet protector. After I filled out a form, the police officials said that I can leave now. When I asked whether they want to check the letter or the car, they said it was not necessary.”

When Bahçi expressed his concern about his family’s security, the police officials responded, “This is Berlin and there are hundreds of cars that are scratched every day.” Complaining about the police officials’ indifference, Bahçi said that he will continue to closely follow the incident.

The Turkish minority in Germany has frequently been targeted in far-right attacks, while officials fail to take concrete action to prevent such violence. Some 871 offenses targeted the Muslim community in Germany last year, according to a report by Germany's New Newspaper of Osnabruck.

Every other day, throughout 2019, a mosque, a Muslim institution or a religious representative in Germany was targeted in an anti-Muslim attack, an inquiry by the Left Party recently showed. The figure was collated by the German Interior Ministry under the scope of the new "Attack Catalog," listing anti-Muslim attacks on cultural associations, cemeteries, mosques, religious institutions, representatives, symbols and other places of worship since January 2019. The catalog only contains a portion of all the crimes against Islam but has a broader scope than only listing the attacks on mosques.

Germany is home to 81 million people and the second-largest Muslim population in Western Europe after France. Of the country’s nearly 4.7 million Muslims, at least 3 million are of Turkish origin.

Racist attacks targeting Muslims or immigrants increasingly make headlines as white supremacists become more efficient in an age where their ideologies, or at least parts of them, are going mainstream. A large, unified group harboring a racist agenda against Muslims and immigrants does not exist at present, but copycat attacks apparently inspire more to take up arms.

Facing ballooning far-right extremism, Germany has been shaken by more than 100 bomb and death threats that were sent to lawyers, politicians and institutions last year by German neo-Nazi groups, local media reported, revealing the threat of a growing presence in the country.

Launched 10 years ago as a small state-run agency to promote Turkish language and culture, the Yunus Emre Institute is now a globe-spanning entity endearing Turkish culture to countless people. With 157 offices on five continents, the institute has helped teach Turkish to 144,000 people. It has also organized hundreds of activities concerning music, art exhibitions, literature, language, gastronomy, cinema and handicrafts to boost Turkey's cultural ties with other countries.

The institute was part of Turkey's efforts to strengthen its "soft power," reaching out to countries with historic and cultural ties, working in partnership with others through cultural projects and boosting the country's profile in the international community. By setting up a developmental aid agency and foundation to create international schools across the world, Turkey has been influential on the international scene over the last decade, reaching out to disadvantaged communities as well as bolstering ties with countries it has maintained relations with dating back centuries.

Named after Yunus Emre, the 13th-century influential writer and poet who made staggering early contributions to the Turkish language, the institute also imbibes the all-embracing philosophy featured in one of his lines of verse: "Let us get to know one another."