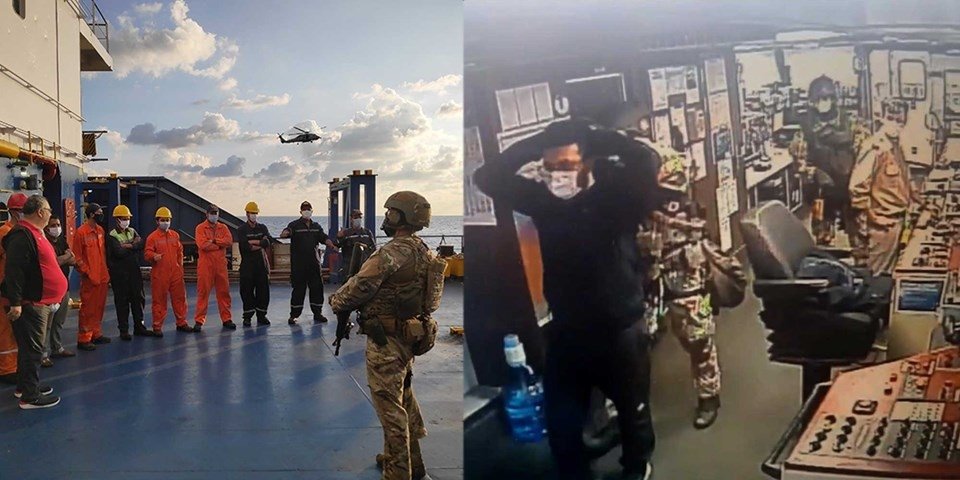 This combination photo taken from footage obtained aboard two vessels shows soldiers forcing the Turkish crew to abandon their positions at gunpoint on the right on Nov. 22, 2020, while on the left, the crew of a Panama-flagged Libya-bound vessel stands relaxed during the search by Operation Irini officers in the Eastern Mediterranean on Nov. 18, 2020.
by daily sabah
Nov 23, 2020 4:34 pm

The German frigate’s interception of a Libya-bound commercial Turkish vessel in the Eastern Mediterranean resembled a counterterrorism operation and significantly differed from a previous incident a week earlier, according to a comparison of the two incidents in photos and video footage.

The same team from the EU-led Operation Irini had boarded a Panama-flagged vessel a week earlier and displayed a relatively gentle approach in comparison to their aggressive manner with the Turkish crew.

Last Wednesday, the same mission inspected the Panama-flagged Serrano vessel, which departed from Alexandria, Egypt and was heading to Tobruk, Libya.

On Sunday, the German frigate, led by a Greek commander, unlawfully stopped the vessel Roseline A south of the Peloponnese peninsula and searched the vessel without receiving permission from Turkish authorities, violating international law.

Turkey condemned the incident, saying that Operation Irini is a biased mission that targets Turkey and the internationally recognized Government of National Accord (GNA) in Libya.