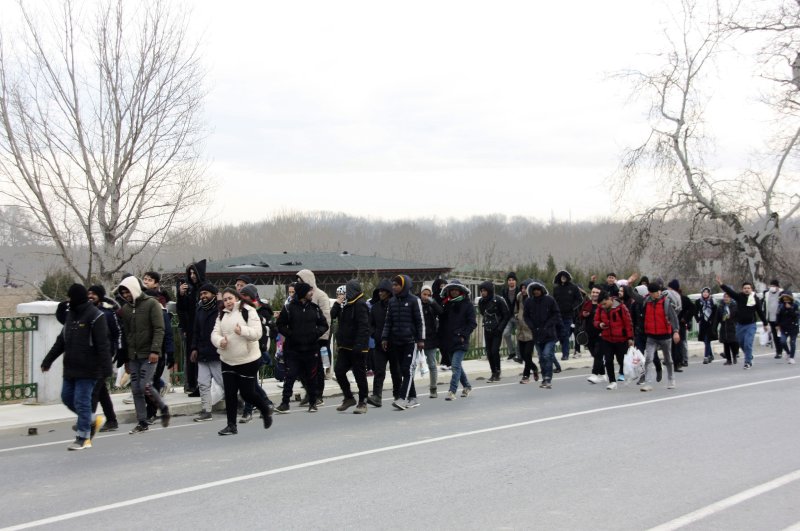 Greece and Bulgaria on Friday tightened border control and boosted border patrols after Turkey said it would no longer prevent refugees from going to Europe, officials said.

"Greece has tightened the guarding of its borders to the maximum level possible," a government source in Greece said.

A Greek police source told Agence France-Presse (AFP) border patrols had been doubled, and a general call for heightened readiness had been issued.

"Everything is under control, there is no reason for concern," the source told AFP. "We are monitoring the situation and adapting our forces (accordingly)," another police source said.

An army source in Greece said around 300 people had been spotted on the Turkish side of the border in the northeastern Evros region. "These numbers are not out of the ordinary," the officer said.

A group of migrants was walking in northwest Turkey toward its border with Greece, the Demirören News Agency (DHA) reported on Friday after Turkey announced the country will no longer stop Syrian refugees from reaching Europe.

There were around 300 migrants, including women and children, in the group which began heading toward the border in Turkey's Edirne province around midnight. Syrians, Iranians and Iraqis were among those in the group, reports said.

As their numbers grew in the morning, Greece announced that it is shutting down Kastanies/Pazarkule border gate with Turkey to prevent refugees from entering the country.

Shortly after the killing of 33 Turkish soldiers in an airstrike in Idlib in northern Syria, a senior Turkish official said early Friday that Ankara would no longer close its border gates to refugees who sought to go to Europe, in anticipation of the imminent arrival of refugees from Syria's Idlib where nearly a million have been displaced.

Turkish police, coast guard and border security officials have been ordered to stand down following the attack that killed 33 soldiers in Idlib, where nearly four million people live in dire humanitarian conditions.

"Since developments in Idlib, (Athens) has been in close contact with the EU and NATO," the Greek government source said.

In addition to the asylum-seekers on the land border with Greece, other migrants had arrived on the coast of Ayvacık in Çanakkale, western Turkey, seeking to travel to the Greek island of Lesbos by boat. AFP reporters on Lesbos said just one boat had arrived with 15 Afghans on board, including several children.

Later in the day, Greek Prime Minister Kyriakos Mitsotakis discussed the situation in Turkey and the movement of migrants toward Greek borders during a call with German Chancellor Angela Merkel, the prime minister's office said. Mitsotakis briefed Merkel over Greece's initiatives, it said.

Mitsotakis later said that Greece does not bear any responsibility for the tragic events in Syria and will not suffer the consequences of decisions taken by others.

No illegal entries into Greece will be tolerated, he added.

Greece was the main gateway for hundreds of thousands of refugees streaming out of Turkey in a mass exodus in 2015 and 2016 until a deal brokered with the EU stemmed the flow.

In Bulgaria, Prime Minister Boyko Borisov said that his country has tightened control of the border with Turkey.

"We have data about a lot of crowding... We are tightening maximum control at the border," Borissov said during a government's meeting, adding that he will meet Turkish President Recep Tayyip Erdoğan on Monday.

The defense minister also said that Bulgaria is ready to deploy up to 1,000 troops and military equipment to the border with neighboring Turkey to prevent illegal migrant inflow.

Krasimir Karakachanov said border police had prevented two groups of about 30 people from entering Bulgaria from Turkey early on Friday after Ankara said it would no longer stop Syrian refugees from reaching Europe.

Bulgaria, a European Union member with a land border of more than 300 km (190 miles) with Turkey, has not experienced pressure from migrants seeking entry in recent years.

Sofia said it would not allow massive migrant inflows at a time when it is stepping up preventive measures at the borders to avoid coronavirus spreading to the country.

Turkey has been telling Europe and other countries that it will not be able to handle another wave of migrants, as it already hosts over 3.7 million, with officials criticizing its neighbors to the West for remaining indifferent to its calls and the dire humanitarian situation in northwestern Syria.

The latest crisis stems from a Russian-backed Syrian regime military campaign to retake Syria's Idlib province, which is the last opposition-held stronghold in Syria.

The offensive, which began Dec. 1, has triggered the largest single wave of displacement in Syria's nine-year war, sending nearly 1 million people fleeing to areas near the Turkish border for safety.

Ankara, the Syrian moderate opposition’s main supporter, sealed its borders in 2015 and, under a 2016 deal with the European Union, agreed to step up efforts to halt the flow of refugees.

However, the recent action by Turkey in response to European countries’ indifference and failure to fulfill its promises may mean the end of the deal in practice.

The customs union was also to be updated in accordance with the deal. In exchange for these promises of the EU, Turkey took the responsibility of discouraging irregular migration through the Aegean Sea by taking stricter measures against human traffickers and improving the conditions of more than 3 million Syrians living in Turkey.