Greece extends lockdown for migrants, asylum-seekers while restrictions ease for rest of country 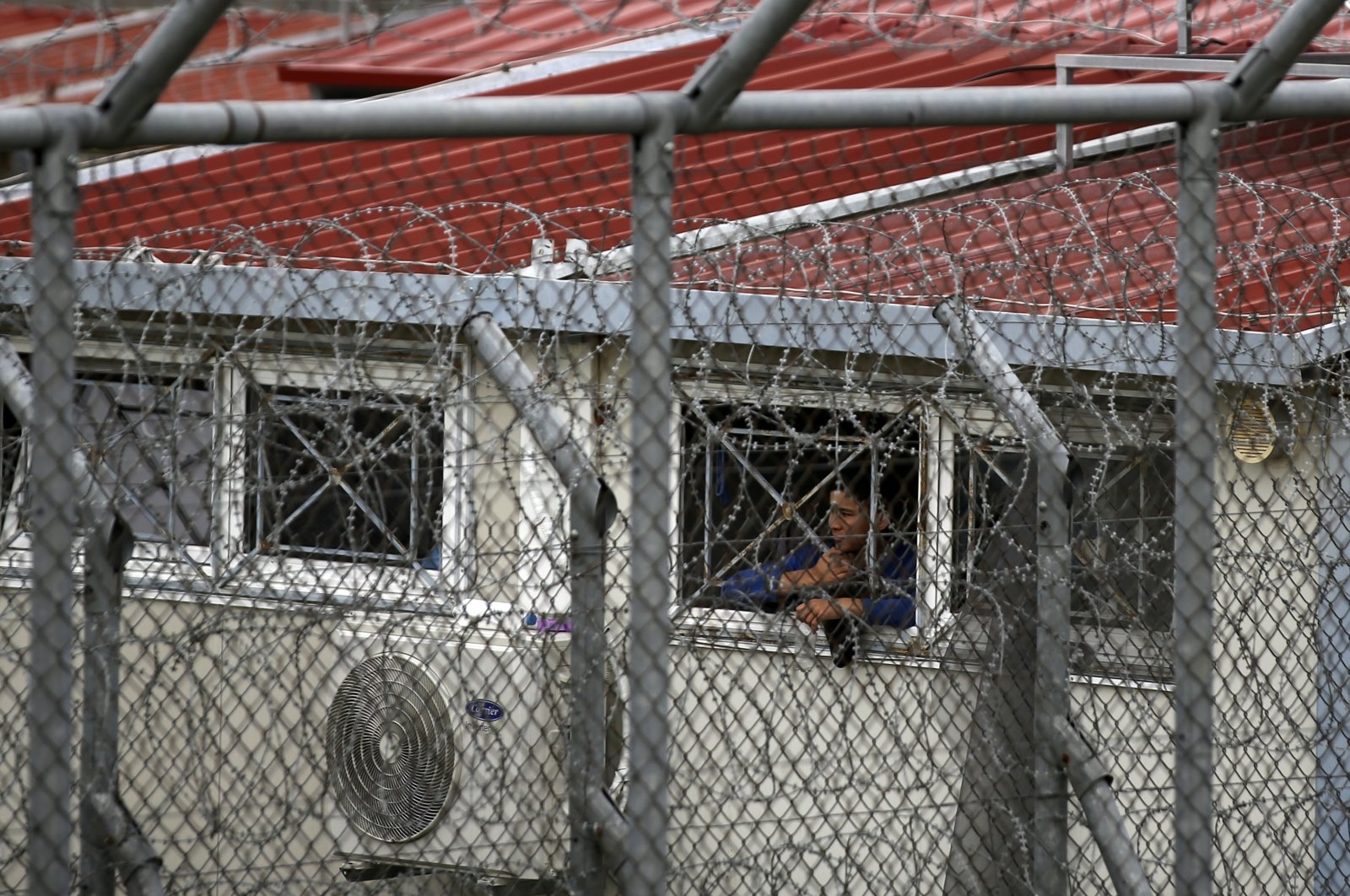 A migrant looks out from a detention center in the village of Fylakio, Evros region, near the Greek-Turkish border, March 8, 2020. (AP Photo)
by DAILY SABAH May 13, 2020 12:22 pm
Edited By Dilara Aslan

The already dire situation in overcrowded migrant camps has worsened with protests and the lack of basic necessities amid the COVID-19 outbreak as Greece decides to extend the lockdown for asylum-seekers, migrants

Greece has begun easing COVID-19 restrictions in the country; however, the same is not true for migrants and asylum-seekers both on the mainland and in overcrowded camps on the Aegean Islands, the Human Rights Watch said.

Starting last week, people could leave their homes without authorization, most shops reopened and older students returned to the classroom while the government is even considering reopening ancient monuments and historic sites for tourism this month.

Greece on Sunday stated it would extend lockdown measures in overcrowded centers until May 21, saying “urgent reasons of public interest ... make it necessary to take measures to limit the spread of COVID-19 in areas of overcrowding, such as the RICs (reception centers) and the structures hosting third-country nationals.”

“While taking steps to contain COVID-19 infections is key, Greek leaders should treat everyone – including migrants and asylum-seekers – the same, without discrimination. And while restrictions on freedom of movement to protect public health can be necessary and justified, they have to be backed by scientific evidence,” the rights group wrote on Tuesday, adding that these restrictions are groundless.

The statement said that despite announcing on April 16 that it would transfer 2,380 people from island camps, only 823 people had been transferred by Greece. As of May 6, 34,052 people lived in camps on the Greek Aegean islands, which is more than six times their capacity.

“In fact, Greek authorities, despite financial support from the European Commission, have not taken basic steps to protect the people in these centers from COVID-19,” HRW said, indicating that the overcrowding and lack of health care, the lack of access to adequate water, sanitation and hygiene products like soap were not addressed.

It further stated that over 2,000 newly arrived people were in mandated quarantine since March in Malakassa and Serres, in unsanitary and cramped conditions while the World Health Organization recommends only a 14-day period.

“The Greek government should continue to reduce crowding at camps, lift arbitrary and discriminatory restrictions on migrants’ freedom of movement and protect their health,” the HRW concluded.

Police forces in northern Greece arrested 25 people Tuesday during a protest at a migrant center that damaged converted shipping containers used as living quarters and other facilities but caused no reported injuries.

Authorities said officers intervened to stop several hours of rioting at the center, located near Greece's border with Turkey. People who enter Greece illegally are registered there and temporarily detained until they can apply for asylum.

The protest occurred following weeks of delays in processing asylum claims due to the coronavirus pandemic. The center currently houses 250 asylum-seekers, including unaccompanied minors, the Evros Police Department said.

The Greek asylum service’s operations have been reduced amid restrictions on travel and movement the government set in response to the pandemic.

Meanwhile, two migrants who arrived on Greece's outlying Lesbos Island had tested positive for the coronavirus, migration ministry sources said on Tuesday, adding that they were isolated with no contact with refugee camps on the island.

The individuals had arrived on Lesbos on May 6. Since March 1 anyone arriving on the island has been placed in quarantine at a separate facility with no contact with larger groups of asylum-seekers at other facilities on the island, the sources added.

Despite years of austerity which placed strains on the nation's health care system, Greece has contained the COVID-19 outbreak. By Tuesday it had reported 2,744 cases since the outbreak and 152 deaths, a fraction of the infections seen in neighboring countries.

A bottleneck in processing asylum applications left many stuck in the country while asylum applications were examined. The overcrowded Moria facility, on Lesbos, hosted more than 17,500 people by the latest official count on May 11. Aid groups have often voiced that the living conditions there are dire.

Human rights groups have frequently criticized the Greek government for holding migrants under the age of 18 traveling without guardians at detention camps.

"As you know, our capacity has been exhausted, so our initiatives are being taken on a European level, and we have already had some success with Luxembourg and Germany,” he said.

Greece has reached out to other EU countries to help share the burden, and in recent weeks 12 children were flown to Luxembourg and 47 to Germany.

More than 42,000 people currently live in the overcrowded camps on the Greek islands, including about 5,500 unaccompanied minors. Around 10% of them are under the age of 14, according to the police agency Europol.

The EU said on March 13 that a group of member countries had agreed to take in at least 1,600 children who reached Greece traveling without their parents. But restrictions that EU member nations adopted to slow the spread of the coronavirus complicated efforts in putting the deal into effect.

The HRW’s campaign to #FreeTheKids, which started on April 14, urges people to press Greek Prime Minister Kyriakos Mitsotakis to immediately release unaccompanied migrant children who are in detention and to transfer them to safe, child-friendly facilities. The rights group further underlined that it was initiating the campaign after years of research and advocacy on “Greece’s practice of locking up children who are in Greece without a parent or relative in police cells and detention centers, urging successive governments to end these serious rights abuses.”

Portugal is to take in 500 children from Greek refugee camps as soon as restrictions on movement imposed to contain the spread of the coronavirus outbreak are lifted, the country's Foreign Minister Augusto Santos Silva said on Tuesday.

"The commitment to take in 500 of the (over) 5,000 unaccompanied minors in camps in Greece remains and it will happen as soon as restrictions due to the pandemic allow us," Santos Silva told a parliamentary committee, according to local news agency Lusa.

Santos Silva's announcement came after Socialist Party lawmaker Isabel Santos said on Saturday that 60 unaccompanied children from Greek refugee camps were expected to arrive in Portugal within the next few weeks. The member of the European Parliament did not specify a date.

The first relocations took place last month when 12 minors were transferred to Luxembourg. Since then, Germany has received around 50 children.

Turkey now hosts about 3.6 million Syrian refugees and migrants, while Greece has just about 120,000 who are waiting for asylum applications to be processed.