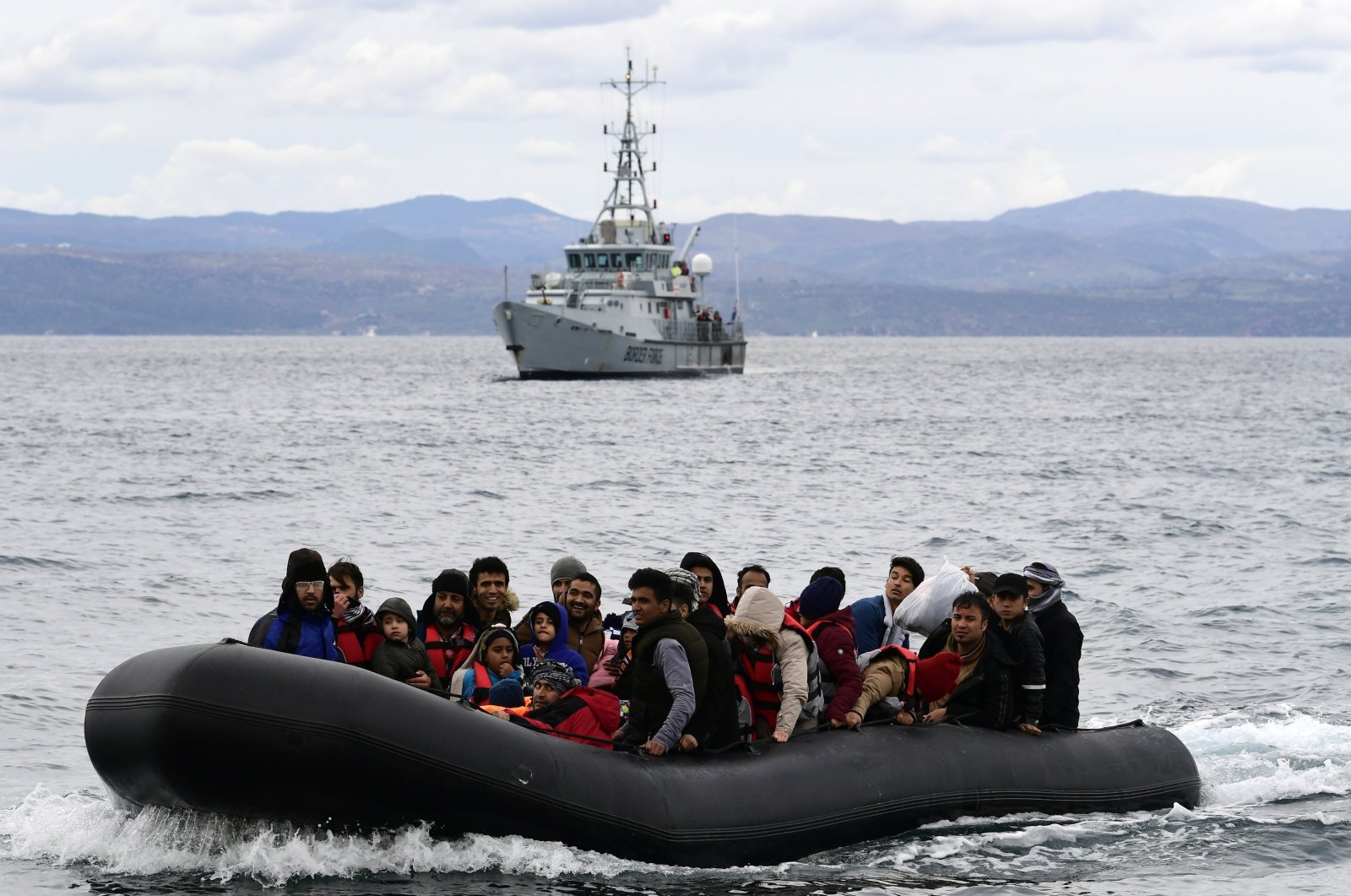 Migrants arrive on a dinghy accompanied by a Frontex vessel at the village of Skala Sikaminias, on the Greek island of Lesbos, after crossing the Aegean Sea from Turkey, Feb. 28, 2020. (AP Photo)
by DAILY SABAH WITH AA Nov 18, 2020 4:19 pm
RECOMMENDED

Greece ordered its coast guard to push migrants into Turkish territorial waters, according to a string of emails exchanged between the European Union border agency Frontex and the Greek coast guard.

"Such pushbacks are illegal under international law given that people have the right to enter Greece to claim asylum," added the Brussels-based newspaper, which reports on international affairs related to the EU.

In an email dated March 6, 2020, an officer of the Greek coast guard reported that he was given instructions to push migrants in a rubber boat into Turkish territorial waters.

A Danish coast guard officer in the area did not follow the instructions and reported the situation to his superiors. Later, the migrants were taken to the Greek port of Kos.

Frontex Director Fabrice Leggeri described the incident as a "misunderstanding," but the European Parliament has requested an investigation, noting that similar pushbacks occur frequently.

Greek officials claim that they comply with international law and that the allegations in question are not true, although Frontex emails clearly documented the pushback instructions.

Last week, the European Commission said it expects answers this month from the Frontex border agency after allegations that migrants crossing from Turkey into Greece were pushed back.

At an extraordinary meeting of the guard agency's management board, Leggeri vowed to improve human rights reporting standards.

The EU commissioner for home affairs, Ylva Johansson, described this in a tweet as "a good start to what I want to be a transparent process."

But she added that Brussels has asked "the Frontex executive director to reply to questions ahead of the next scheduled board meeting (end November)."

Several media reports, including from the German weekly Der Spiegel, have uncovered evidence of Frontex guards working with Greek authorities to push migrants back into Turkish waters.

Last month, nearly 30 nongovernmental organizations (NGOs) called on Greece to open an "urgent inquiry" into allegations that it was systematically pushing migrants back toward Turkey.

Pushbacks are considered contrary to international refugee protection agreements. Under the principle of “non-refoulement,” people should not be expelled or returned to a country where their life and safety might be in danger due to their race, religion, nationality or membership in a social or political group.

The Turkish Coast Guard Command said it rescued over 300 migrants “pushed back by Greek elements to Turkish waters” in September alone. Citing what they say are credible reports, international rights groups have repeatedly called for an investigation.

Most recently, on Nov. 9, a Turkish coast guard operation to rescue 25 migrants who were pushed back by Greece to die in the Aegean Sea was captured on video by unmanned aerial vehicles (UAVs).

The two ships then left the area in a maneuver that could have sunk the boat.

Last week, the Turkish Defense Ministry reiterated: "Greek soldiers do not refrain from moves that could sink boats carrying dozens of migrants, including children. They open fire around the boats and puncture rubber dinghies with spiked sticks."