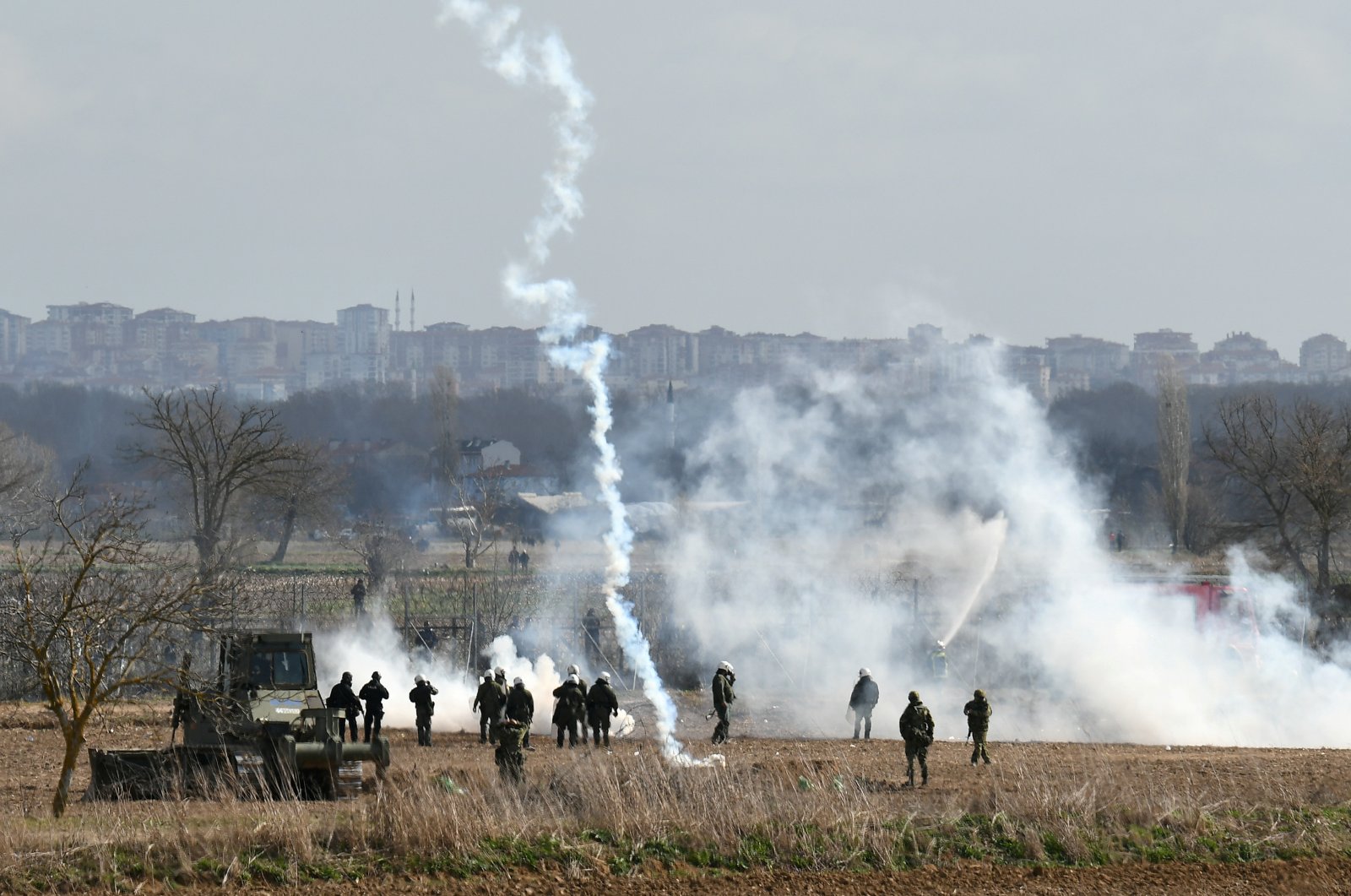 After a couple days of relative calm, the tension at the Greek-Turkish border has escalated again as Greek security forces resumed the use of brutal violence against asylum-seekers, refugees and migrants trying to cross the border.

On Wednesday, Greek security forces threw stones at those trying to enter from the border with Turkey.

The refugees and migrants had been waiting in and around the buffer zone located between the Pazarkule-Kastanies border crossing.

The Greek security forces fired pepper spray and tear gas on them and used slingshots to pummel them with stones.

The forces also used gas shells and water cannons on those who came close to the border gate.

It was also reported that Greek security forces use date-expired tear gases and air fans to increase the impact of the gases on the refugees and migrants.

The wounded have been treated in tent hospitals set up by Turkish health officials.

Turkey recently announced that it would no longer try to stop asylum-seekers, refugees and migrants from leaving its borders to Europe.

Thousands have since flocked to Turkey's Edirne province, bordering Greece and Bulgaria, to make their way to Europe.

Greece gave a tough response, vowing not to let anyone pass from Turkey without the proper paperwork. The country received backing from EU leaders who reiterated Greece's message that the borders to the bloc are closed.

On March 1, Athens announced it was suspending asylum applications for a month, allowing for the immediate deportation of anyone seized without proper immigration paperwork. Greek security forces say they have stopped nearly 45,000 people from entering Greece in the past two weeks, with hundreds arrested and sent back.

EU leaders are desperate to avoid a repeat of the 2015-16 migrant crisis, when around 1 million people flooded into the bloc from Turkey, putting a huge strain on national social services and straining relations among member states.

But in taking such a hard line, Greece has opened itself to criticism that it is flouting international humanitarian law and that the EU, which presents itself as a bastion of human rights and democracy, is an unwelcoming fortress.

The European Commission has thus far given Athens full backing. European Commission President Ursula Von der Leyen has described Greece as Europe's shield. "Our first priority is to ensure order is maintained at the Greek external border, which is also a European border," she said last week.

But after The New York Times reported on Tuesday that Greece was running a secret "black site" close to the border, holding migrants without access to lawyers or the ability to make asylum claims – a claim denied by Athens – von der Leyen may have to find words that refer to the need to promote Europe's way of life, not just protect it.

The Greek reaction to those seeking a new chance at life in Europe has been harsh, with many battered, attacked or tear-gassed and several killed by Greek forces. Greece has tear-gassed thousands of people trying to break through the border and has been accused of beating and stripping refugees and migrants of their belongings if they are able to successfully cross to Greece.

With 3.7 million Syrian migrants in Turkey already, more than any other country in the world, and some 1 million poised across the border in Idlib, Syria, Ankara says it cannot absorb another refugee wave.

Turkish Foreign Minister Mevlut Çavuşoğlu this week said his country was seeking an update to the 2016 migration agreement with the EU, which pledged billions of dollars to Turkey for hosting refugees and keeping migrants away from the Greek and Bulgarian borders.

Meanwhile, Greece continues to force nearly 500 migrants and refugees arriving on the island of Lesbos to wait at the port for more than a week.

Greek officials declined to comment on the situation of asylum-seekers waiting at the port.

The Human Rights Watch (HRW) had said on Tuesday that Greece has violated international and European law by not allowing people to seek asylum.

"Greece's decision to detain more than 450 people on a naval vessel and refuse to allow them to lodge asylum claims flagrantly violates international and European law," a statement by HRW said.

"The refusal to allow people in its custody to seek asylum and the open threat to send them back to their persecutors flies in the face of the legal obligations Greece has agreed to and the values and principles it claims to represent," said the statement quoting Bill Frelick, refugee and migrants' rights director at HRW.

He also called on Greece to allow people in need of international protection to apply for asylum.

EU to offer migrants money
EU and Greek officials on Thursday said 5,000 asylum-seekers on the Greek islands would be given financial incentives to return home to relieve pressure on overwhelmed camps.
The plan, available for a month only and based on a 2,000-euro ($2,260) stipend, is only open to those who arrived in Greece before Jan. 1.
"We have now agreed on a special temporary assisted voluntary return scheme ... for a period of one month," EU home affairs commissioner Ylva Johansson said after talks in Athens.
"We think it will be an open opportunity for 5,000 migrants," she said.
The money is designed to help asylum-seekers start afresh in their countries of origin, she said.
"It's clear that we are facing a national emergency and we need to protect our borders," said Greek migration minister Notis Mitarachi.
Voluntary returns would be carried out with help from the International Organisation for Migration (IOM) and EU border agency Frontex.

Amid the increasing tension between Ankara and Athens due to the migration crisis, the Turkish foreign ministry on Wednesday summoned the Greek ambassador in Ankara over violations of Turkey's waters and to warn Greece about its border units.

Athens' envoy Michael-Christos Diamessis was summoned to the ministry in Ankara.

The ministry demanded that Greece stop the violations of Turkish territorial waters and that Greece warn its units on the land border.

Turkish officials also sought an end to journalists being detained on the islands of Rhodes and Lesbos where they were reporting on the asylum-seekers' humanitarian situation.

The Greek coast guard said earlier on Wednesday that one of its patrol boats was rammed by a Turkish coast guard vessel, although only minor damage was caused.