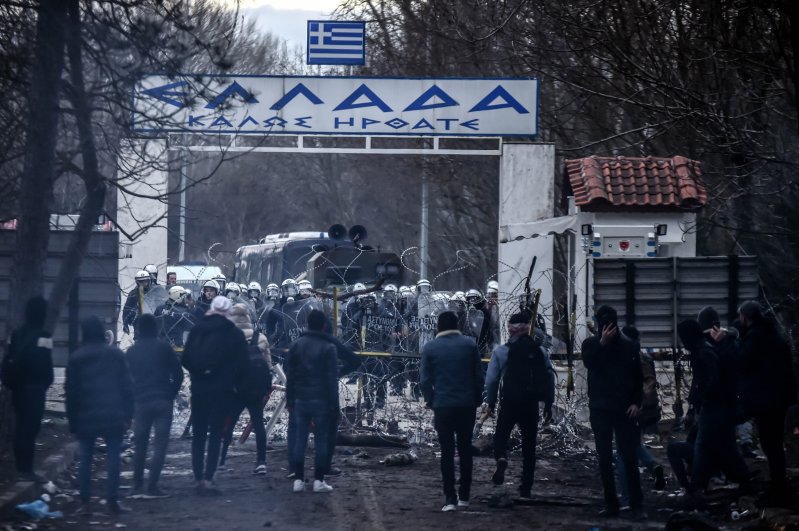 Greek police use tear gas against migrants waiting at the border crossing at Kastanies and Pazarkule to cross to the European Union territories on Feb. 28, 2020. (IHA Photo)
by Daily Sabah with DPA Feb 29, 2020 11:21 am
RECOMMENDED

Greece border police used tear gas and stun grenades Saturday to prevent migrants from entering the country. The government said it is determined to prevent the entry of migrants coming from Turkey.

"Throughout the night the security forces have prevented illegal border crossings," Defence Minister Nikos Panagiotopoulos told Greek news channel Skai on Saturday, a day after Turkey said it would no longer prevent refugees from going to Europe.

Several migrants have been arrested, he added.

Greece has also stepped up checks in the straits between the Greek islands in the eastern Aegean and the Turkish coast, said Shipping and Island Policy Minister Ioannis Plakiotakis, who is also in charge of the coastguard.

"The Greek borders are also the borders of Europe," he said.

Border police and special units of the riot police used tear gas and stun grenades overnight to prevent migrants from entering Greece via the closed border crossing at Kastanies and Pazarkule.

The situation remained tense on Saturday. Some migrants managed to cross the border river in rubber dinghies, state television reported.

The Greek government convened for a crisis meeting on Saturday morning to discuss the migrant issue.

Shortly after the killing of 33 Turkish soldiers in an airstrike in Idlib in northern Syria, a senior Turkish official said early Friday that Ankara would no longer close its border gates to refugees who sought to go to Europe, in anticipation of the imminent arrival of refugees from Syria's Idlib where nearly a million have been displaced.

Turkish police, coast guard and border security officials have been ordered to stand down following the attack that killed 33 soldiers in Idlib, where nearly 4 million people live in dire humanitarian conditions.