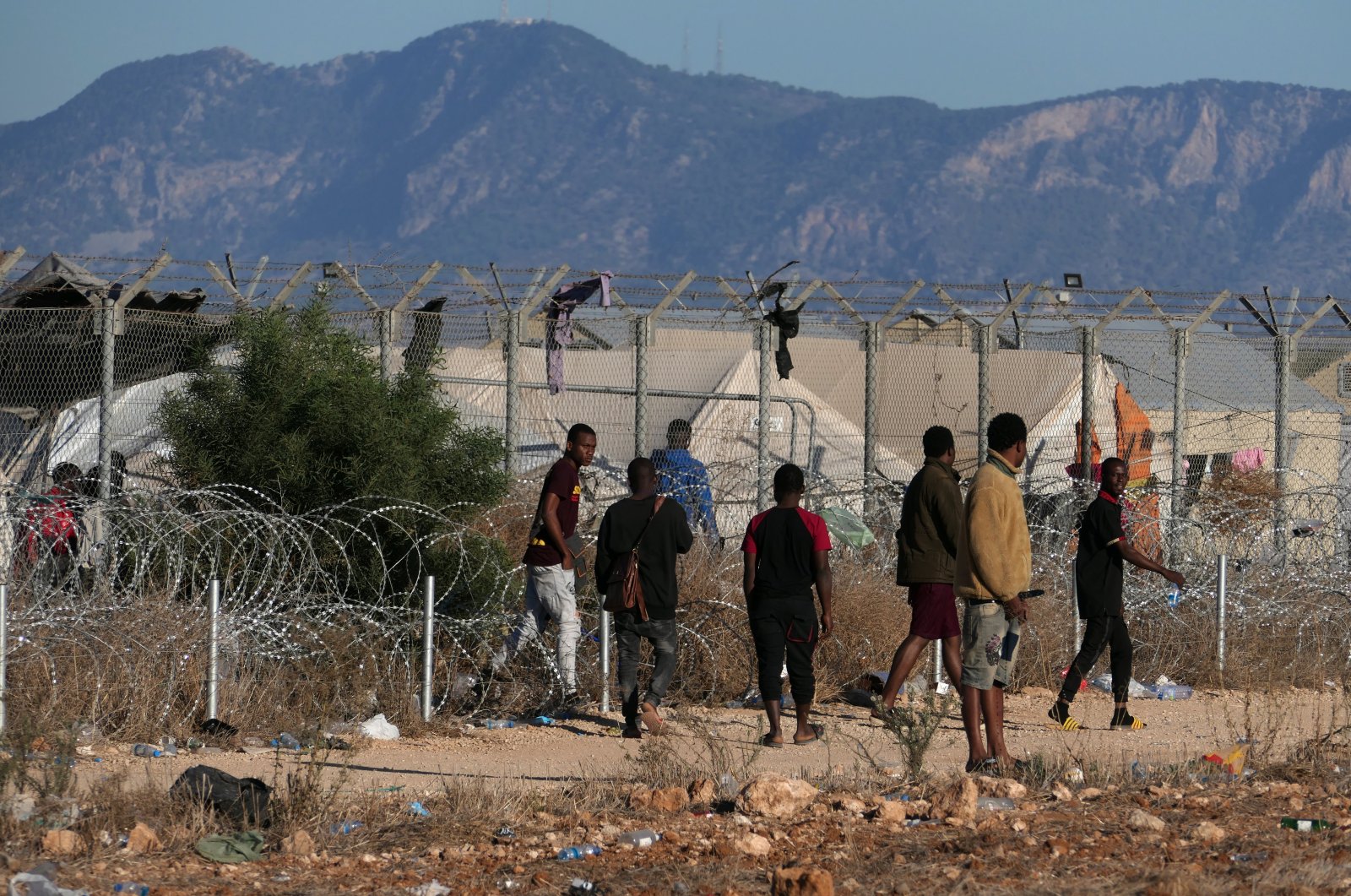 Migrants walk outside the Kokkinotrimithia Pournara refugee camp in the village of Kokkinotrimithia, Greek Cyprus, Nov. 2021. (EPA Photo)
by Daily Sabah with AFP Nov 11, 2021 8:19 am
RECOMMENDED

Greek Cypriot authorities said they would suspend asylum applications amid an influx of irregular migrants.

The island was facing "demographic change" and "acute socio-economic effects" as a result the migrant crisis, Greek Cypriot government spokesperson Marios Pelekanos said, adding that they would request the European Commission take action.

The Greek Cypriot administration says it has the highest number of first-time asylum applications among all 27 EU members relative to its population of roughly one million.

Migrant flows recorded in 2021 were 38% higher than for all of last year, said Pelekanos.

In the first 10 months of the year, 10,868 irregular migrants arrived in Cyprus, he said.

The current flows added to the more than 33,000 people already illegally residing in the republic, the government spokesman added.

"The percentage of asylum seekers exceeds 4% of the population, when in the rest of the EU front-line countries it does not exceed one percent," Pelekanos said.

His remarks came after ministers agreed on a series of measures to tackle the spike in irregular migration at an emergency meeting chaired by Greek Cypriot leader Nicos Anastasiades.

According to the government, 15,000 people have had their asylum applications rejected but cannot be deported because there is no coherent EU policy or agreement with their home countries on sending them back.

Pelekanos said they were calling on the European Commission to offer emergency measures to address a "deteriorating situation."

Also on Wednesday, Greek Cypriot police said a boatload of 61 migrants thought to be from Syria and Lebanon, including 28 children, were escorted to shore in Paphos, on island's east coast.

Earlier this month, the Turkish Republic of Northern Cyprus (TRNC) urged the Greek Cypriot administration to cooperate on the issue of irregular migration.

"At the crossroads of three continents, the island of Cyprus is not immune to irregular migration. Both the Turkish Republic of Northern Cyprus and the Greek Cypriot administration of southern Cyprus receive irregular immigration from various countries," said a statement from the TRNC's Ministry of Foreign Affairs.

"Contrary to the Greek Cypriot side, our country is devoid of international assistance and struggling with irregular migration only with the support of motherland Turkey," it added.

The statement said the issue of irregular migration should be addressed within the spirit of cooperation and requires joint efforts with a sense of responsibility and solidarity from the international community.

At an EU Asylum Support Office conference in Malta last month, Interior Minister Nicos Nouris said Greek Cyprus is “obliged to take significant and drastic" measures along the buffer zone, adding that about 800 migrants crossed it recently within a 10-day span. Nouris added that 15,000 migrants have had their asylum applications rejected but can't be deported because there's no coherent EU policy – or agreement with their home countries – on sending them back.

The Greek Cypriot administration entered the European Union in 2004, the same year that Greek Cypriots thwarted a U.N.-led plan to end the dispute.