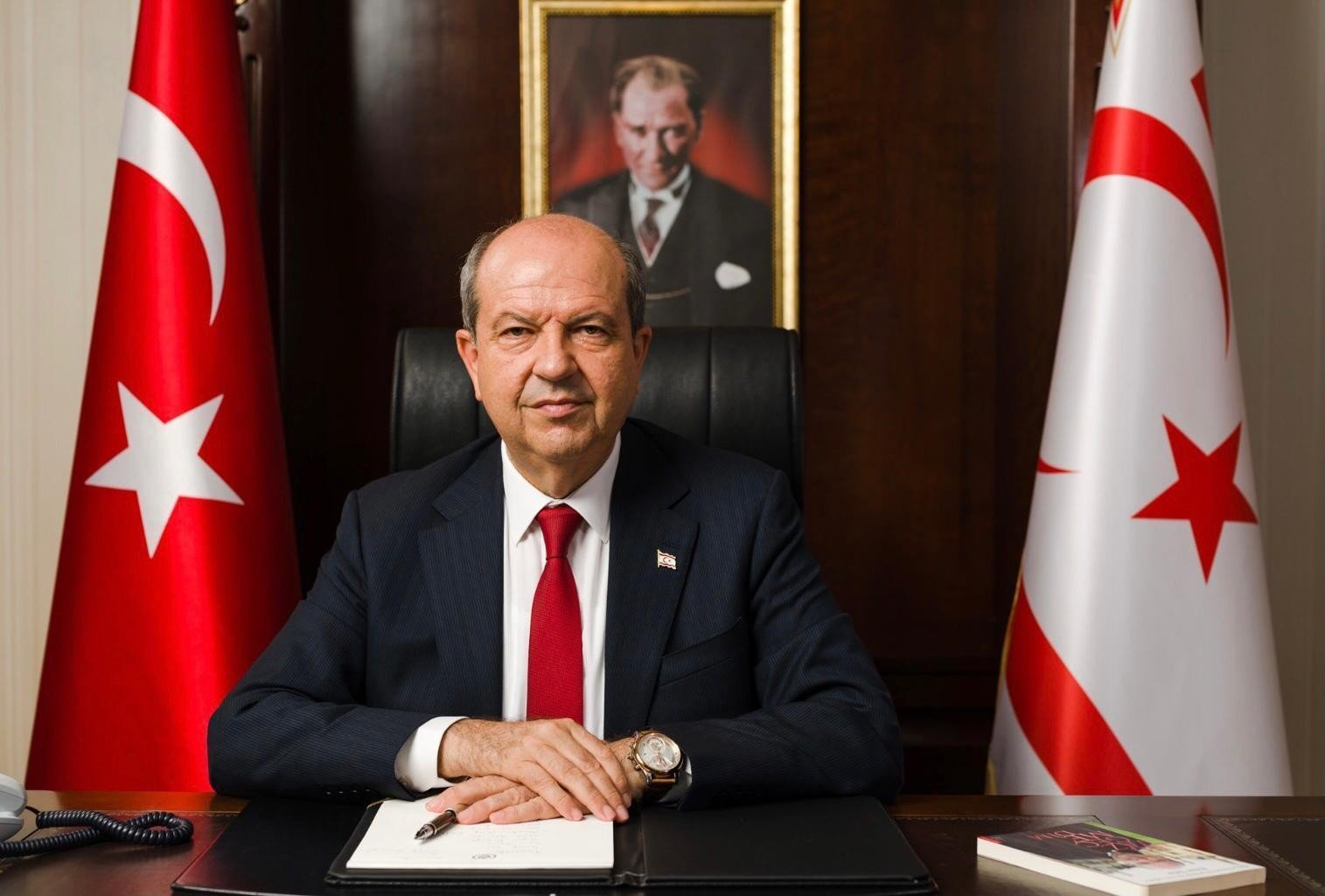 The parliamentary election results in the Greek Cypriot administration, in which the far-right ELAM party made big gains, once again prove that a deal based on the federal solution on the island is no longer a realistic option, the Turkish Republic of Northern Cyprus (TRNC) President Ersin Tatar said Monday.

Evaluating the election results in the Greek Cypriot administration, Tatar told Anadolu Agency (AA) that nationalism and extremist ideologies have been on the rise on the Greek side of the island and added that this is not a positive development for a fair, permanent and sustainable agreement for the Cyprus issue.

Underlining the rapid rise in ELAM's vote share, Tatar said: "ELAM and its supporters back the idea of ​​Cyprus becoming a fully unitary state. We see the rise of a mentality that does not even deem the Turkish Cypriots worthy of their minority rights. Worse yet, ELAM gets more votes from younger people. The reason for this is the extreme nationalism in the education system that includes Greek admiration, the idea that Cyprus is a Greek island and admiration for EOKA."

"According to the information we have obtained, the influence of extremist and nationalist movements in the education system on the Greek side is increasing. It is tried to be placed in the subconscious of children at an early age that Cyprus is a Greek island, that Cyprus should eventually be connected to Greece, that Hellenic nationalism and the flag of Greece," he added.

The far-right ELAM party and a centrist splinter group made big gains in the Greek Cypriot administration's parliamentary election on Sunday as a sizeable chunk of supporters appeared to have turned their back on the top three parties amid voter disenchantment with traditional power centers.

With 100% of votes counted, ELAM garnered 6.78% of the vote – a 3% increase from the previous election in 2016 – to edge out the socialist EDEK party by the razor-thin margin of around 200 votes. The centrist DIPA – made up of key figures from the center-right DIKO party which has traditionally been the third biggest party – gained 6.1% of the vote. The center-right DISY emerged in first place with 27.77% of the vote, 5.4% more than second-place, communist-rooted AKEL. But the parties respectively lost 2.9% and 3.3% of their support from the previous election.

"This extremism in the education system is also reflected in football clubs. Greek flags are always featured in the matches of big football clubs. It appears to increase interest in ELAM among young people. Therefore, I am watching this situation with concern. I see how realistic and in line with the realities of Cyprus is our new vision of two states based on sovereign equality in Cyprus," Tatar also said.

TRNC and Turkey have long advocated that the solution for the decadeslong Cyprus issue should be based on the recognition of two equal sovereign states on the island. Turkish President Recep Tayyip Erdoğan earlier this month said that any future talks concerning the Cyprus question should involve two states rather than communities.

Underlining that the equal status and sovereign equality of Turkish Cypriots must be confirmed before fresh negotiations begin, Erdoğan said the latest Cyprus talks held informally in Geneva last month had been inconclusive due to the "intransigent attitude of the Greek side, detached from the facts on the island."

The two sides have differing views on how to resolve the issue, with Greek Cypriots backing a federal system and Turkish Cypriots a two-state deal. Five decades of Cyprus talks have led nowhere. The conflict has fueled tensions between NATO allies Greece and Turkey, impeded Ankara’s bid to join the European Union and triggered friction in the Eastern Mediterranean over potential undersea hydrocarbon reserves.

Tatar also told AA that there are parties on both sides of the island which believe in a federal solution and do not support a two-state solution, adding that one of them, AKEL, lost votes in the latest elections on the Greek side.

The politics on the island should be conducted based on facts, Tatar said, adding that Greek nationalists demand that Turkey abandon the island, that Turkey and TRNC give up their rights and interests in the Eastern Mediterranean, that all sovereignty rights on the island must be obtained by the Greek side and that the EU should increase its influence on Cyprus. Despite that, the Turkish Cypriots have always defended that they dominate Cyprus as much as the Greeks and that they have rights in the Island, Tatar emphasized.

Tatar had recently said that the European Union's prejudiced stance on the Cyprus issue damages ongoing efforts to reach a solution on the island. Turkish leaders have frequently expressed skepticism over EU involvement in the Cyprus issue, saying that the bloc has proven itself a biased actor on the issue.

"At the moment, the United Nations and our other interlocutors are in search of whether there is a new ground after the 5+1 informal conference in Geneva. They will probably see how serious this will be. I see this being confirmed once again with the election results. Because there is no result by forcing an agreement. There was an agreement in 1960. It did not even last 3 years. Now if they are going to put forward an agreement by force in Cyprus again, we would never accept such a thing. There will be a conflict immediately with this mentality. The two-state solution model that I advocate is the right way. Turkey also supports this, we will go to the end together," Tatar told AA.