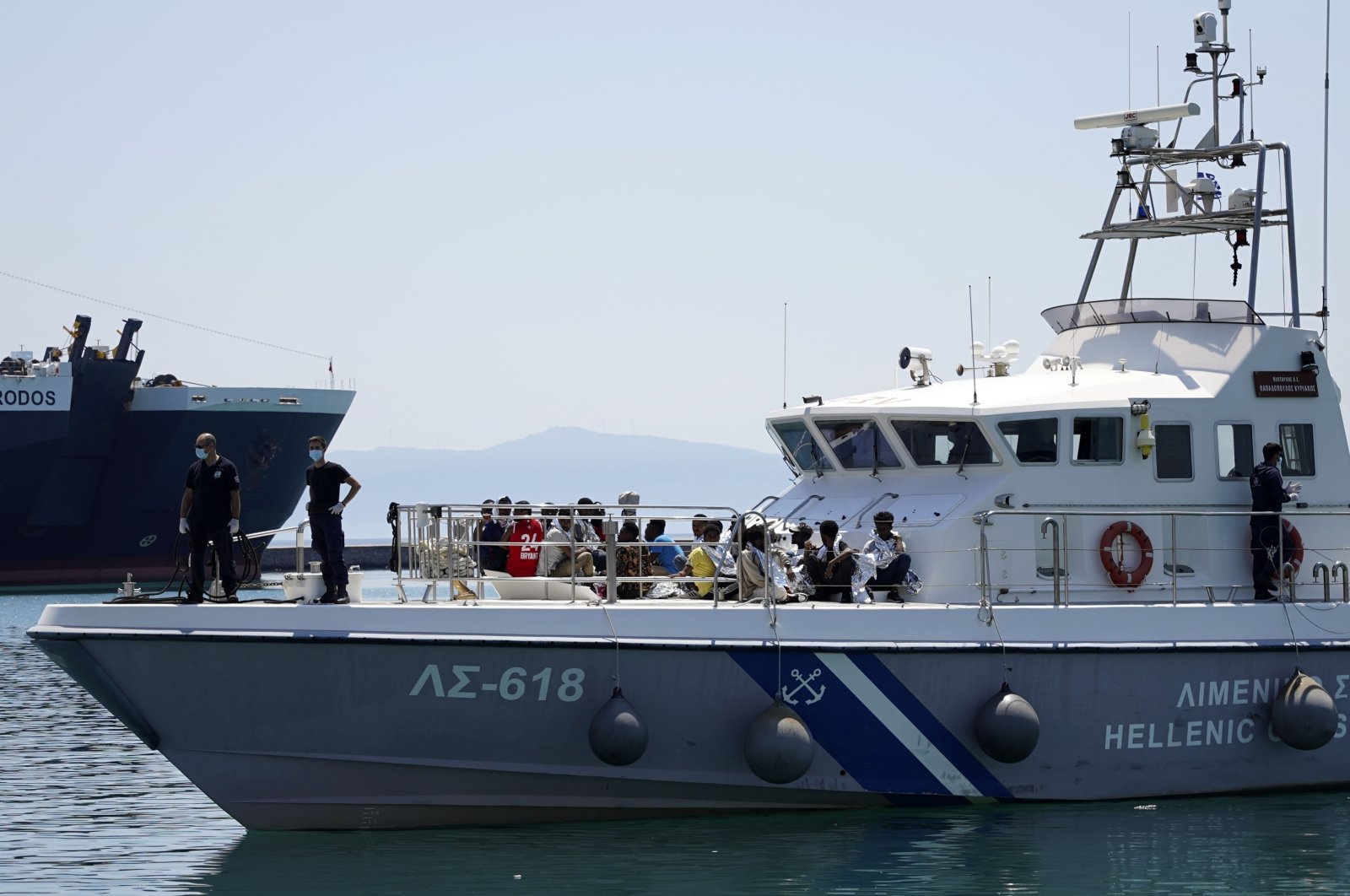 Migrants sit on the deck of a coast guard vessel upon their arrival at Mytilene port, on the northeastern Aegean Sea island of Lesbos, Greece, June 22, 2022. (AP)
by Agencies Jun 23, 2022 11:05 am
RECOMMENDED

Greece's migration policy focuses on security issues and creates "an atmosphere of fear" among migrants and their advocates, the United Nations human rights body said on Wednesday.

That policy is having a "suffocating effect" on civil society, U.N. Special Rapporteur on Human Rights Defenders Mary Lawlor said.

"Geopolitical circumstances and a lack of support by the European Union have led to questions being posed of Greece that many other states have not been asked concerning migration," she added.

"The government's current approach to the issue is defined by its framing of migration as a matter of security and prevention," she stressed, adding: "What this has fostered for refugees, asylum seekers, migrants and the human rights defenders acting in solidarity with them, is an atmosphere of fear-particularly a fear of criminalization."

"Defenders in the country working to ensure the rights of refugees, asylum seekers and migrants are respected, are currently under severe pressure," she noted, saying migrants, who make efforts to make sure that their rights are protected, also face "heightened risk" in the country.

"At the tip of the spear are prosecutions, where acts of solidarity are reinterpreted as criminal activity, specifically the crime of people smuggling," she underscored.

"The negative impact of such cases is multiplied by smear campaigns perpetuating this false image of defenders," Lawlor criticized, underlining that the country's migration policy has a "suffocating effect" on Greek civil society.

She pointed out that this policy creates "the climate of fear and insecurity" while also allowing high-ranking Greek authorities to "attack and undermine" the work of human rights NGOs.

The ones that are trying to demonstrate and prevent the pushbacks carried out by Greek security forces are "particularly at risk," she said, emphasizing that these pushbacks "force refugees and migrants back over a border without consideration of their individual circumstances or the opportunity to apply for asylum."

Voicing concerns about the situation of LGBTI people's and women's rights defenders in the country along with the journalists who work on issues related to human rights, especially migration and corruption, Lawlor called on Greece to "embrace the role of champion for the rights of these groups, and to work with them to develop pathways towards a more positive environment for their work."

"Governments and the societies they are elected to represent have much to gain from the recognition and promotion of the work of human rights defenders. Greece is no exception," the expert stressed.

"I urge the Government to approach all those working for the promotion of human rights in the country openly, and as allies, no matter the issues concerned."

Both countries have been key transit points for asylum seekers aiming to cross into Europe to start new lives, especially those fleeing war and persecution.

Already hosting 4 million refugees, more than any other country in the world, Turkey is taking new security measures at its borders to humanely prevent a new influx of migrants.

Athens has promoted its success in preventing tens of thousands of migrants from entering the country.

But Lawlor's visit comes after repeated accusations by rights campaigners that the Greek coastguard has been illegally forcing migrants to return to Turkey.

Athens has denied the allegations, but both the European Union and the United Nations High Commissioner for Refugees (UNHCR) called for an investigation.

In March, the country's national transparency authority said a four-month investigation had found no evidence of such practices.

But in her statement Wednesday, Lawlor said government policy and statements by senior officials had heaped pressure on organizations working to defend migrants' rights.

Since he was elected three years ago, conservative Prime Minister Kyriakos Mitsotakis has increased security on the border with Turkey with the help of the EU border agency Frontex.

Lawlor traveled around Greece from June 13-22 at the invitation of the government, interviewing, migrants, rights activists and other interested parties. She is due to report back to the U.N. Human Rights Council in March 2023.