Impartiality at stake in East Med talks as Greece lobbies for US, EU support 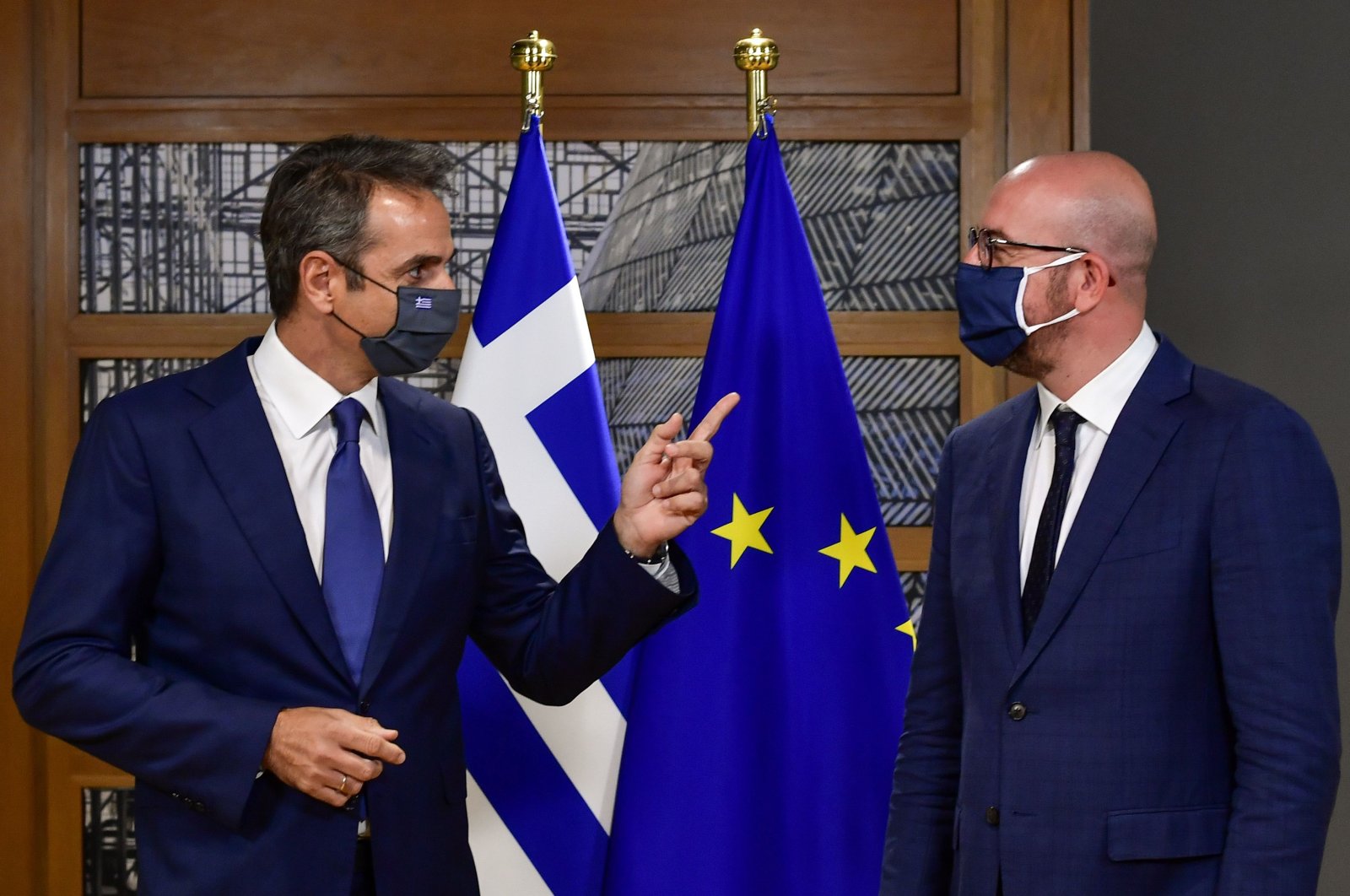 Encouraged by the diplomatic backing of Washington, Athens sought Brussels' support in Thursday's leaders' summit that focused on a solution to the Eastern Mediterranean conflict between EU member candidate Turkey and EU member Greece

Amid tensions in the Eastern Mediterranean between NATO allies Turkey and Greece, Athens looked for EU backing in Thursday’s leaders’ summit in Brussels after securing a diplomatic boost from the United States, which said relations with Greece are “at an all-time high and getting stronger.”

Referring to Washington's increasing support for Greece and the Greek Cypriot administration in the regional conflict involving Turkey, Foreign Minister Mevlüt Çavuşoğlu said during a televised speech Wednesday: "The U.S. should not violate its neutrality. It’s not right for them to lift the embargo, even if it is limited. This violates its neutrality."

U.S. Secretary of State Mike Pompeo visited a U.S. naval base at Souda Bay on the southern Greek island of Crete Tuesday, ahead of a meeting with Greece's prime minister on the second day of his trip to the country.

Moreover, last October, Pompeo visited Athens and signed a revised defense cooperation agreement with Greece that provided for increasing joint U.S.-Greece and NATO activity in three locations in Greece as well as infrastructure and other improvements in Souda Bay.

The U.S. also lifted a decadeslong arms embargo on the Greek Cypriot administration last month, a move Turkey said was disrupting “equality and balance” between the Turkish Cypriot and Greek Cypriot communities on the ethnically divided island nation.

Similar words came from Turkey's ruling Justice and Development Party (AK Party) on Tuesday as spokesperson Ömer Çelik stressed the U.S. “has lost its impartiality” in the dispute by visiting Greece two times in a month and ignoring Turkish Cypriots during a visit to Cyprus.

“You cannot serve peace in the region by visiting only the Greek side on the island, by paying two visits to Greece and by making one-sided statements of support,” Çelik told reporters. “We believe that there is a need for a return to a balanced policy.”

The U.S. administration will "play any role that's appropriate and useful and constructive," Pompeo told Greek newspaper Ekathimerini after his two-day visit to Greece on Wednesday.

The European Union’s 27 leaders met in Brussels Thursday to find ways of de-escalating tensions between Turkey and bloc members Greece and the Greek Cypriot administration over gas exploration activities in the Eastern Mediterranean region.

Just as it has voiced to the U.S., Turkey has frequently called on the EU to adopt a fair stance regarding the dispute and give up on favoring Greece under the pretext of EU solidarity.

Ahead of the summit, President Recep Tayyip Erdoğan Wednesday sent a letter to bloc leaders, reiterating Ankara's call for dialogue with Greece amid tensions in the region.

EU leaders will also try to break a stalemate over Belarus by untangling the standoff with Turkey that has exposed the paralysis in the bloc's decision-making.

In a doorstep statement, European Commission President Ursula Von der Leyen called for de-escalation in the Eastern Mediterranean but also warned that the EU has prepared tools to respond to a possible new crisis.

"There are two possibilities, either the tensions are rising that is something which we don't want, or there's de-escalation and we are moving towards a constructive relationship, this is what we want," she said.

"But either way, there is a toolbox at the disposal of the European Union. We want de-escalation, we want a positive agenda (with Turkey), together this will be discussed today," she added while European Council President Charles Michel told leaders similarly in an open letter ahead of the meeting on Wednesday that the bloc's objective is to create a space for a constructive dialogue with Turkey to achieve stability and security in the whole region."

The summit was initially scheduled for last week, but it had to be postponed when Michel entered quarantine because of contact with a person infected with COVID-19. He has since tested negative for the virus.

While a host of issues are on the agenda, the heart of the discussions will center on Turkey.

Meeting in Brussels for a two-day summit, leaders are set to confront the Greek Cypriot administration, which is accused of holding up approval of economic sanctions on Belarus following an election in August that the West and the opposition say was rigged.

The Greek Cypriot administration says the EU must first agree to impose sanctions on Turkey to send a message that Ankara's oil and gas exploration along the coast of the Mediterranean island is unacceptable.

The EU is being pulled in different directions by France's tough stance on Turkey and Germany's push for dialogue.

German Chancellor Angela Merkel has reiterated her insistence on a diplomatic solution to the Eastern Mediterranean conflict between Turkey, the Greek Cypriot administration and Greece.

"I will point out that our relation to Turkey is of course very complex," she said ahead of a meeting with the EU leaders, highlighting that Turkey is a NATO member and hosts a large number of refugees.

"We have to solve the tensions in the Eastern Mediterranean and the Aegean Sea. And for me, diplomacy plays a prominent role," she added.

On the other side, French President Emmanuel Macron said that EU members must show solidarity with Greece and the Greek Cypriot administration and that Europe's solidarity must be "non-negotiable" while conservative Austrian Chancellor Sebastian Kurz also insisted on a tough stance toward Ankara saying the EU "needs a clear response to Turkey's actions including sanctions."

The European Union must stand firm against Turkey and this could mean possible sanctions, France’s European Affairs Minister Clement Beaune said accordingly on the day of the meeting on broadcaster France 2 television.

Athens and Ankara have said they are prepared to resume talks on continental shelf disputes interrupted in 2016. The talks are to be held in Istanbul but a date has not been announced.

Sixty prior attempts have been held since 2002 without success.