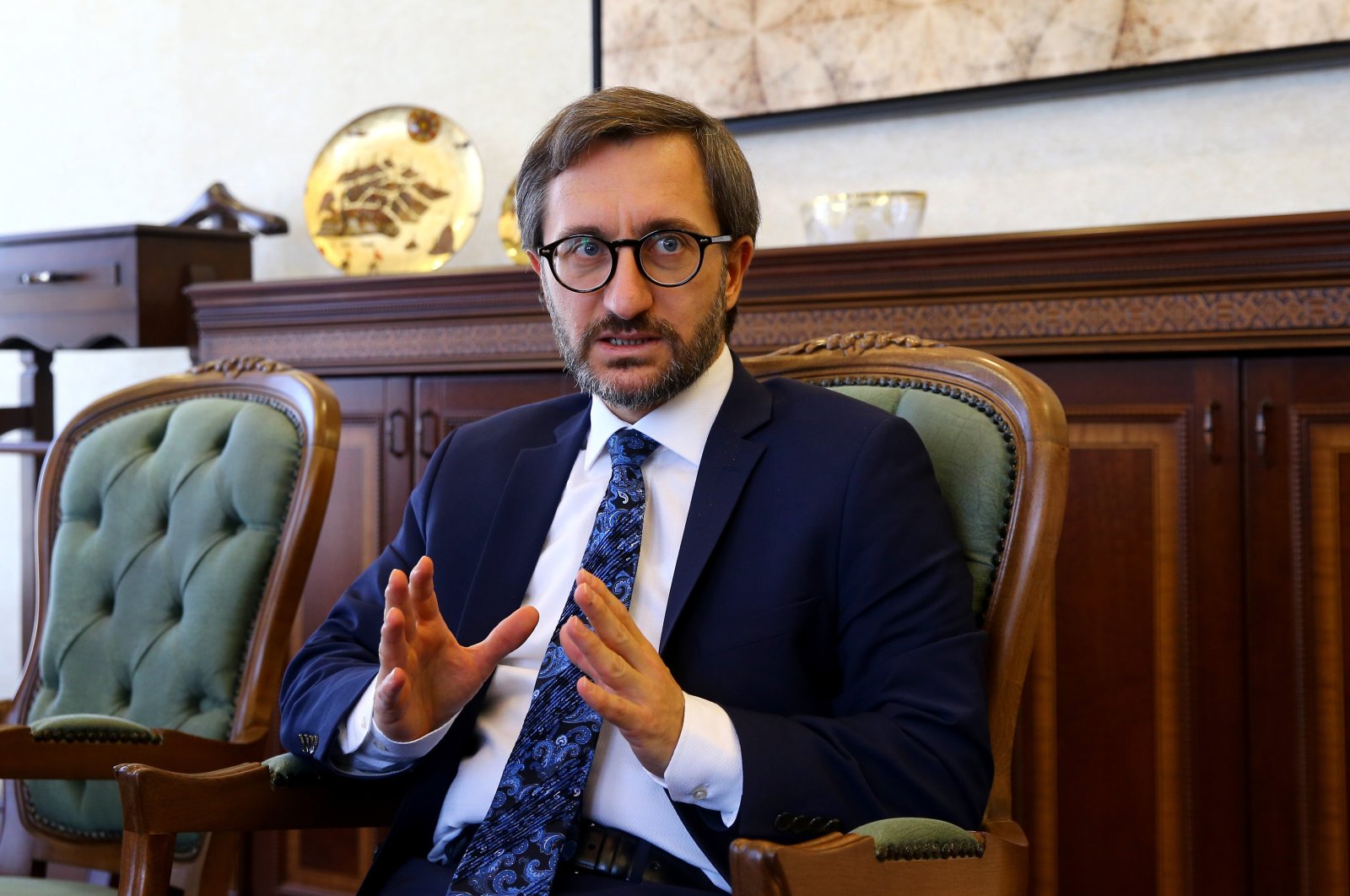 Turkey's Presidential Communications Director Fahrettin Altun criticized French President Emmanuel Macron on Monday over his controversial plans to crack down on what he dubbed as Islamic separatism in France.

"President Macron's recent anti-Islam rhetoric is yet another example of a desperate European politician vying for relevance," Altun said on Twitter.

"His flailing attempt to assume leadership in Europe is driving his promotion of Islamophobia, xenophobia and his attacks on our President (Recep Tayyip) Erdogan," he added.

Altun stressed that Macron is discriminating against Muslims in France and in Europe for political purposes, "trying to instrumentalize fears and ignorance."

"Macron is following the old fascist playbook that targeted Jews in Europe in this manner," he said.

"We need to call out such irresponsible figures whose statements and actions are not simply the effect but the cause of hostility against Islam. Politicians like Macron are savoring opportunities to condemn a whole religion in order to cover their failings on the home front."

Altun underlined that targeting Muslims is much easier and politically convenient for European leaders like Macron, "who should be focusing on finding the culprits of terrorism in his country instead of projecting his failure to protect French citizens onto the great civilization of Islam."

In seeking geopolitical relevance in the Mediterranean, Macron has already tried to present Muslims as the southern neighbors of Europe, Altun said.

"In reality, Muslims and Turkey are very much in the center of the Mediterranean region and will not go away!" he added.

"Macron is very much aware that what he calls Islamic separatism is a farce. Muslims have been living in the Mediterranean and Europe for centuries. He is the one trying to sow discord and division among cohabitants in this region," he underscored.

Macron is attacking Turkey and Erdoğan "because they are the living proof that the Mediterranean region is not the property or colonies of Europe."

"When he attacks us, it is because we consistently confront his racist and colonialist mindset."

"To be clear, Macron's rhetoric and actions are anathema to ideals and principles that Europe claims to aspire. Freedom of speech, multiculturalism, tolerance and respect for religion are being attacked by Macron himself. This is a grave threat for Europe," Altun said.

He also stressed that there is a very fine line between Islamophobia and anti-Semitism.

"They are driven by similar racist and fear-mongering impulses. When Macron is one of the leading voices of Islamophobia today, we will not be surprised when he utters anti-Semitic statements tomorrow!" he said.

"This situation does not bode well for the relations between the EU and the Muslim world. Muslims' perceptions of Europe will only deteriorate further, but they will not respond in kind. Muslims will not fall into Macron's trap of hatred and division."

‘We condemn killing of French teacher'

"Once again, we condemn the killing of the French teacher in the strongest terms. Islam is a religion of peace and it cannot be used to justify taking any lives," Altun concluded.

Macron's remarks sparked huge controversy and a boycott of French goods, including dairy products and cosmetics, by multiple Muslim countries including Qatar, Jordan, Kuwait, Iran, Turkey and Pakistan. Demonstrations have also taken place with posters of Macron set alight in some instances.

The French president made the statements in the wake of the recent beheading of teacher Samuel Paty in the outskirts of Paris.

Paty, a 47-year-old father who taught history and geography at Bois-d'Aulne College in Conflans-Sainte-Honorine, was brutally murdered by Abdullakh Anzorov, an 18-year-old man of Chechen origin.

The teacher, during one of his classes on freedom of expression, had shown controversial cartoons depicting Prophet Muhammad, according to the reports. Anzorov was killed by police in the aftermath of the attack, and an investigation is ongoing.

The murder also gave rise to a massive police probe involving over 80 investigations and multiple suspects being questioned and taken into custody.

Last Thursday, Macron led a tribute to Paty in Paris along with high-ranking French officials. In his speech, he said Paty's death was an act of "gratuitous terrorism."

Macron also vowed that France would continue to allow cartoons of the Muslim Prophet Muhammad which sparked an outcry among Muslims across the world.

In recent weeks, Macron has attacked Islam and the Muslim community, accusing Muslims of "separatism." He described Islam as "a religion in crisis all over the world."

This coincided with a provocative move by Charlie Hebdo, a left-wing French satirical magazine infamous for publishing anti-Islamic caricatures that have drawn widespread anger and outrage across the Muslim world.

The caricatures were first published in 2006 by the Danish newspaper Jyllands-Posten, sparking a wave of protests.