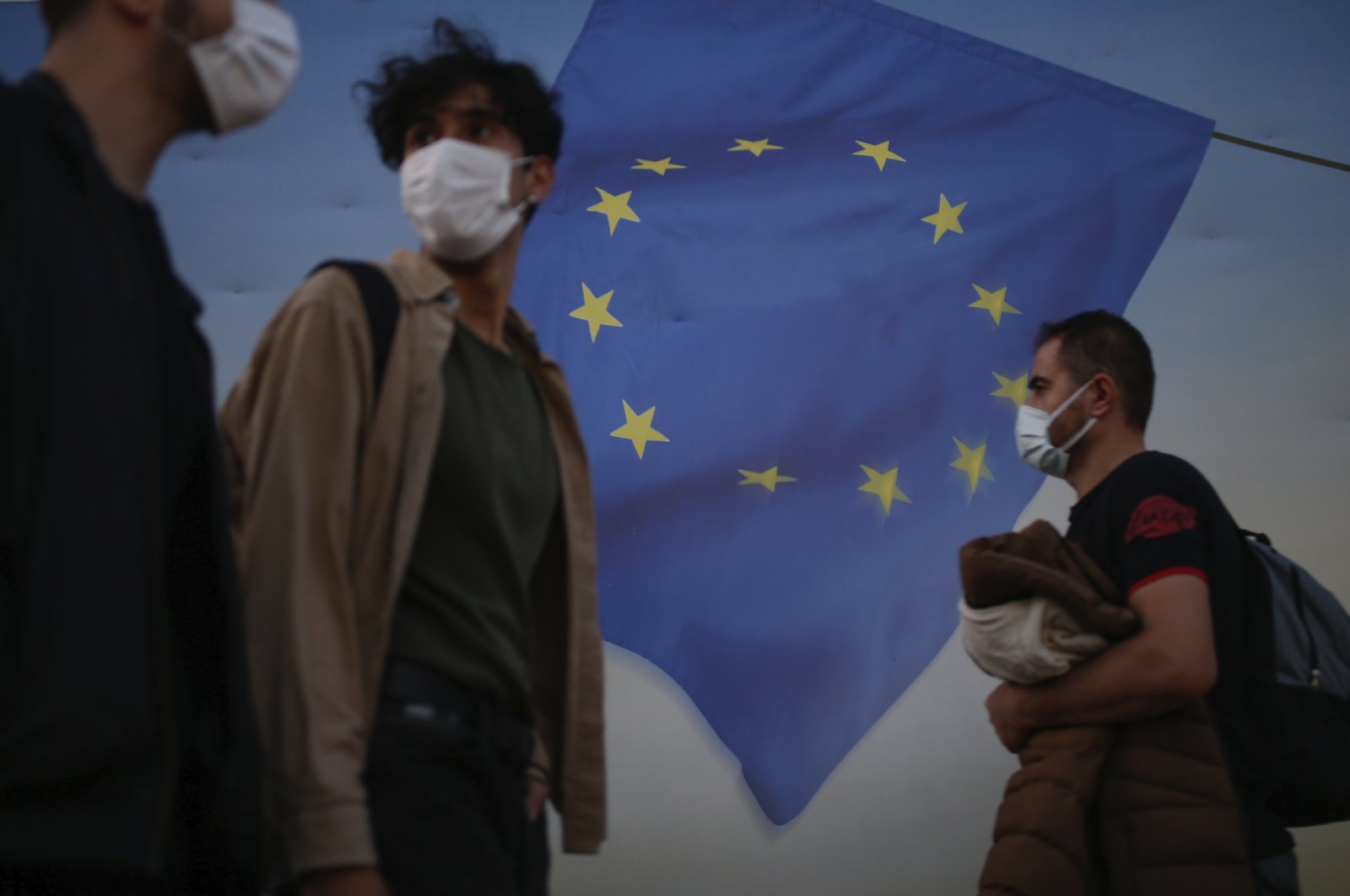 Backdropped by a poster with a European Union flag, people, wearing masks to help protect against the spread of coronavirus, walk in Istanbul, Friday, Oct. 2, 2020. (AP Photo)
by Anadolu Agency
Nov 30, 2020 3:43 pm

Despite rising tensions between Turkey and the European Union, some experts argue that the EU leaders' summit on Dec. 10-11 will not lead to any substantial sanctions against Ankara and the bloc's possible exclusionary policies targeting the country would work against the union itself.

While some circles think that the upcoming summit will be a "breaking point" in bilateral relations, political experts say this perspective alone does not reflect the truth and the EU would not risk losing Turkey.

According to Enes Bayraklı, the European studies director of the Turkish think tank Foundation for Political, Economic and Social Research (SETA), although the EU and Turkey have had some disputes, they should work to strengthen their ties through cooperation.

The current international political environment makes cooperation a must for both sides, Bayraklı said, noting that neither has the luxury of turning its back on the other.

He went on to say that the December summit might result in some "symbolic" decisions against Ankara, adding it was unlikely that the European pact would adopt significant sanctions. The Turkish expert said the discourse on the so-called "breaking point" was just a tool used to put psychological pressure on Ankara.

Bayraklı further noted that Europe has gone through a major transformational period over the past two decades due to discourse adopted by the polarization of the right and left, which is another reason behind tensions with Turkey.

"So Europe, to become a global actor, needs a country like Turkey," and it also needs to confront its own weaknesses, he said. Bayraklı added that the bloc does not have such capabilities at the moment. "On the contrary, Europe is moving toward the far-right and an authoritative (structure)," he said.

Nurşin Ateşoğlu Güney, an academic in the International Relations department of Istanbul-based Nişantaşı University, agreed that Turkey and the EU have gone through a thorny period but said the bloc will not give up on Turkey.

"I don't think the EU would opt to depart from Turkey," she said, adding that both sides are somehow dependent on one another.

The European organization currently has many internal disputes, other than the disagreements with Turkey, Güney said.

Some members, including France, Austria, Greece and the Greek Cypriot administration, want to corner Turkey and impose sanctions, she noted, but there are also other nations sharing bilateral ties and common interests with Ankara.

According to Güney, the EU will not cut its ties with Turkey for multiple reasons, including economic and security concerns, as excluding Turkey would not work in the favor of European leaders.