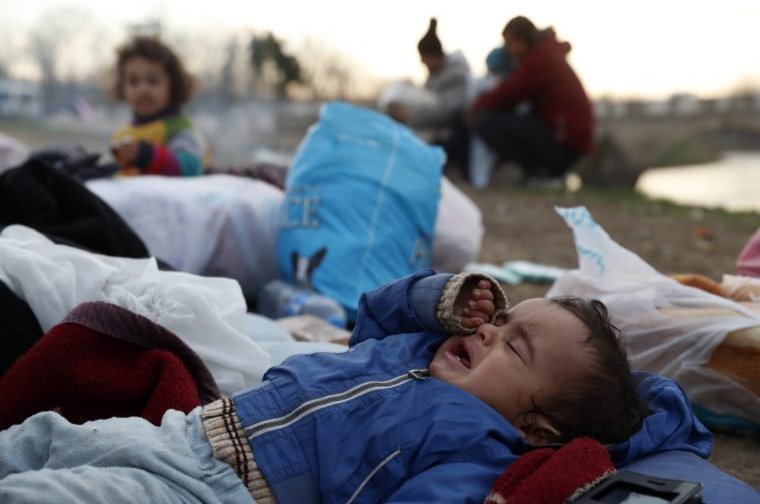 A baby cries as migrants gather next to a river in Edirne, Turkey, near the Turkish-Greek border, on Wednesday, March 4, 2020. (AP Photo)
by Daily Sabah with DPA Apr 02, 2020 11:13 am
Edited By Dilara Aslan
RECOMMENDED

The European Court of Justice (ECJ) ruled Thursday that Poland, Hungary and Czechia breached European Union law by failing to take in their assigned share of refugees under a 2015 relocation scheme, which aimed to ease the burden of countries such as Greece and Italy that received large numbers of refugees during the first peak of the 2015 crisis.

At the height of an influx of people seeking refuge in 2015, a majority of EU capitals agreed to a refugee relocation scheme under which asylum seekers would be moved from overburdened Greece and Italy to other member states.

Each country was allocated a set quota of asylum seekers, many of whom were fleeing the war in Syria. Budapest, Prague and Warsaw opposed the scheme from the outset.

Furthermore, the three countries could not cite general internal security concerns to refuse asylum-seekers, the ECJ ruled. A case-by-case evaluation of each person applying would be necessary before turning people away in the name of public safety, the judges noted.

By late 2017, Hungary and Poland had not taken any asylum seekers, while the Czechia accepted 12 relocated migrants from Greece. Under the EU scheme, the three countries were supposed to take in more than 10,000 refugees.

Migration remains a hugely divisive issue among EU member states, which have failed in recent years to make progress on a long-overdue reform of EU asylum rules.

The 2016 EU-Turkey deal helped to ease the crisis on Greek islands near Turkey, whose facilities were overwhelmed by a refugee influx in 2015. The number of refugees and migrants coming from Turkey has significantly reduced as a result. It was agreed that irregular migrants arriving on the Greek islands from Turkey who do not apply for asylum or whose application has not been accepted may be returned to Turkey. But that changed when Turkey did not receive the promised support from the EU, leading it to open its borders for refugees who want to cross to Europe last month.

With the highest number of Syrian refugees in the world, around 3.7 million, Ankara has reached its capacity and was left alone in the fight to stop the refugee flow.