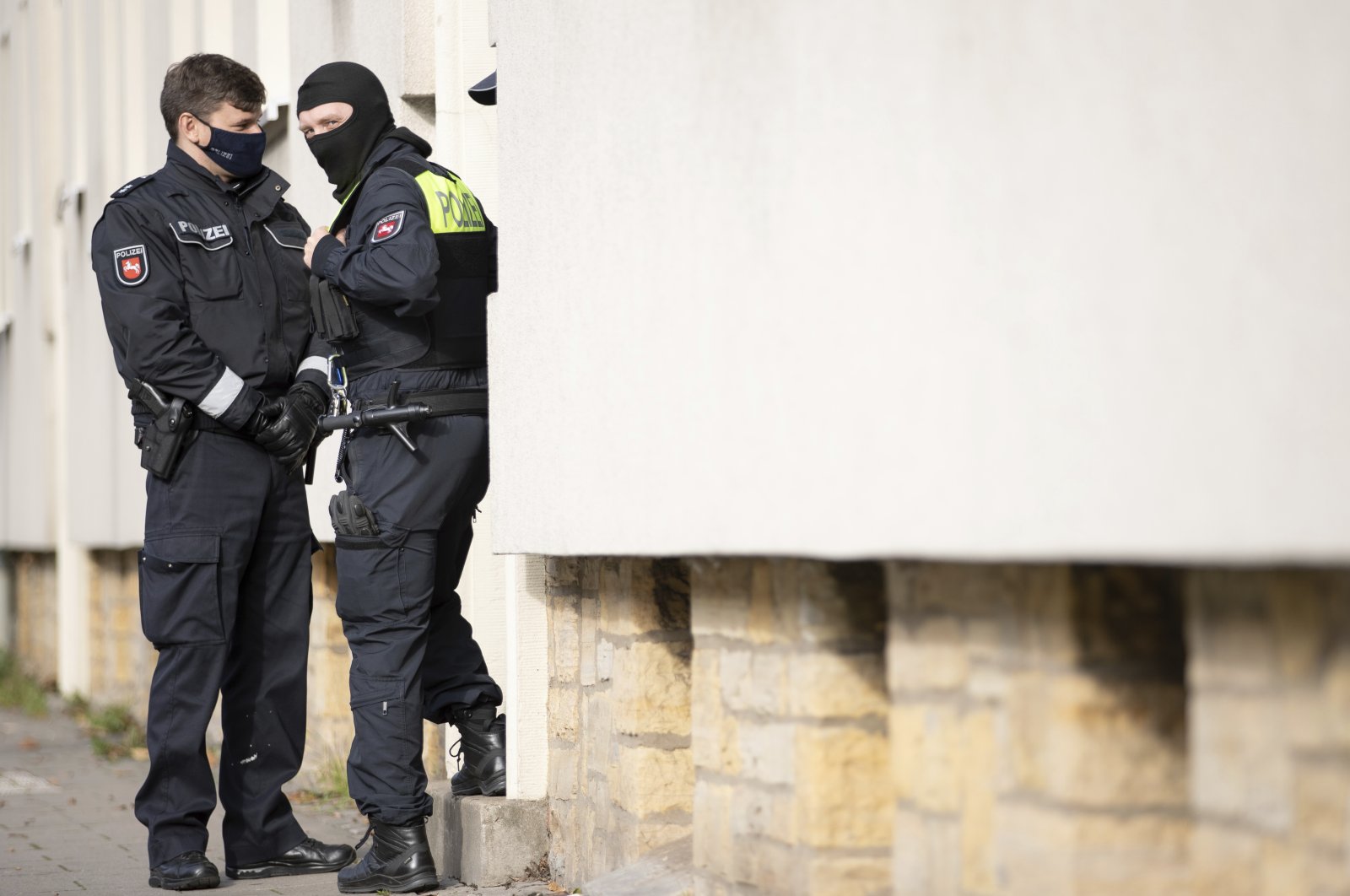 Police officers are standing outside an apartment building during a search in Osnabruck, Germany, Nov. 6, 2020. (AP Photo)
by Daily Sabah with Agencies
Nov 13, 2020 1:32 pm

Anti-Muslim hatred, racism, anti-Semitism and discrimination have become a serious problem in Europe, as a German study reveals structural problems in police forces, while a French politician accuses the government of hiding Islamophobia under the guise of secularism

Reports of anti-Muslim hatred-related incidents have sent shockwaves across Europe, as a recent study revealed the structural problem of racism among some German police officers who go on “hunts” looking for Turks and other minorities. Meanwhile, a French opposition politician criticized the government for concealing its Islamophobic attitude under the guise of “secularism.” Turkish officials frequently urge their European counterparts to take action against racism.

Racist officers among Germany's police force intentionally target Turkish people and other minorities in what they call "Turk hunts," according to a recent study on racism and police violence in the country.

The research carried out by professor Tobias Singelnstein of Ruhr-University Bochum revealed that there is a structural problem among the German police, with reports of racist, Islamophobic and anti-Semitic insults, confirmed by police officers and victim testimonies.

"Some officers intentionally go on searches to hunt Turks," one of the officers interviewed as part of the study said, adding that they search out and target Turkish people for the most minor mistakes like not signaling and provoke them to react against the police.

One of the police officers told researchers that some of his colleagues have adopted a provocative approach on purpose, even though they have the ability to calm even the angriest crowds.

Singelnstein interviewed 3,370 individuals as part of the study.

Noting that there is a structural problem in the police force, the professor said it was not possible to properly identify the extent of the issue and that nationwide racism research was necessary.

For instance, an immigrant woman told researchers that police referred to her as a "monkey girl," and several others have said they have received similar treatment by the police during large events.

Some 62% of the non-white people who participated in the study and 42% of those with an immigrant background said they faced police discrimination, while this figure was recorded as 31% for the rest of the participants.

The German professor's study has advised the government to analyze the issue of racism and discrimination in the country's police force.

Last month, after a monthslong debate in Germany, government officials agreed to launch an investigation into racism within the police. The research is expected to focus on the issue of racism among police officers, as well as the violence and abuse that officers themselves experience while on duty.

According to a report by the German daily Neue Osnabrücker Zeitung, some 871 attacks targeted the Muslim community in Germany last year.

"Hatred of Muslims continues to be displayed in violent attacks, threats and insults," Left Party spokesperson Ulla Jelpke told the daily in March.

Germany has been recording Islamophobic crimes separately since 2017. The total number of cases in 2019 has not been officially announced. In 2018, there were 910 incidents, including 48 attacks on mosques alone, a little lower than 2017 with 1,095 crimes.

In 2017, authorities reported 56 Islamophobic assaults resulting in 38 injuries. In 2018, there were 74 offenses with a total of 52 injuries – including two attempted murders.

Islamophobia is being disguised as secularism in France, a French opposition leader said in criticism of the Emmanuel Macron-led government, which recently came under fire for policies against French Muslims.

"There is hatred toward Muslims under the guise of secularism in this country. Secularism does not mean to hate a religion," Jean-Luc Melenchon, leader of the left-wing France Unbowed movement and an MP from a Mediterranean region with a large Muslim population, told the BFM-TV channel earlier this week.

Melenchon said Muslims should be respected and the constant suspicion toward them should end.

He said he would continue repeating these statements even though some people would not like it.

He also stressed that he stands against hatred toward Muslims.

Noting that he has received the signatures of 150,000 citizens in support of his candidacy in the 2022 presidential election, Melenchon said the method of fighting against terrorism should change.

His remarks come after recent anti-Islam statements by Macron and other politicians.

Islamophobia has been surging in the country, while the arbitrary detention of minors in southeastern France's Albertville commune, caused an uproar. Three Turkish children and a child from North Africa, who are all 10 years old, were taken to a police station following a dispute over the brutal killing of French teacher Samuel Paty and cartoons that insult Muslims.

The children were interrogated for 11 hours at the police station.

A father of one of the children said that the French police raided his house in the early morning.

Last Wednesday, a member of the Jewish French Union for Peace (UJFP) said that the recent detention in France of the children on alleged terrorism charges was a sign of impending barbarism.

Georges Gumpel said in a blog post that the move showed that children are not valued in France and he had not considered writing about his painful childhood until now but the incident triggered his response, according to an Anadolu Agency (AA) report.

Gumpel said he was born to a Jewish family in 1937 and his father was sent to Auschwitz in 1944 when he was only five years old. Referring to the detention of the children, he said that initially, he did not believe it, as France was a country with human rights, yet the outrageous incident made him question the means used to cover up crimes committed against children.

He further noted that the detention of the children in Albertville in southeastern France on the pretext of "terrorist propaganda” and a previous incident where police forced students at a school in Mantes-la-Jolie district near Paris to kneel for hours were signs of impending barbarity.

Last month, Macron described Islam as "a religion in crisis" and announced plans for tougher laws to tackle Islamic "separatism" in France.

Tensions escalated after middle school teacher Samuel Paty was murdered and beheaded on Oct. 16 in a Paris suburb in retaliation for showing his students blasphemous cartoons of the Muslim Prophet Muhammad during a class on freedom of expression.

Insulting cartoons by the French weekly magazine Charlie Hebdo were also projected on buildings in some French cities.

Macron defended the cartoons, saying France would "not give up our cartoons," sparking outrage across the Muslim world.

His remarks sparked huge controversy and a boycott of French goods, such as dairy products and cosmetics, by multiple Muslim countries including Qatar, Jordan, Kuwait, Iran, Turkey and Pakistan. Demonstrations have also taken place with posters of Macron set alight in some instances. Turkey has been one of the countries with the harshest reaction to Macron's rhetoric.

Several mosques, shops and other places belonging to the Turkish and Muslim communities have become targets of racist and anti-Muslim attacks, while European politicians have come under fire for their racist remarks.

Last week, a Turkish butcher shop was attacked twice in western France’s Nantes, while several mosques, shops and other places have been targeted in racist attacks in Germany and other countries in Europe.

Germany’s official anti-discrimination watchdog said in June that it received 1,176 complaints about racism in 2019, an increase of 10% from the previous year. They made up about a third of all complaints received by the agency.

Meanwhile, a report by the European Union’s Fundamental Rights Agency (FRA) said black people in the bloc are being regularly targeted, urging governments to step up efforts against racism.

Nearly a quarter of the respondents said they were stopped by police in the previous five years, and 41% of those who were stopped felt that racial profiling was involved.

"We need to work together to eradicate racist practices once and for all in Europe," he added.

Turkish officials, including Erdoğan and others, have frequently urged European decision-makers and politicians to take a stance against racism and other types of discrimination that have threatened the lives of millions of people living in the bloc’s borders.