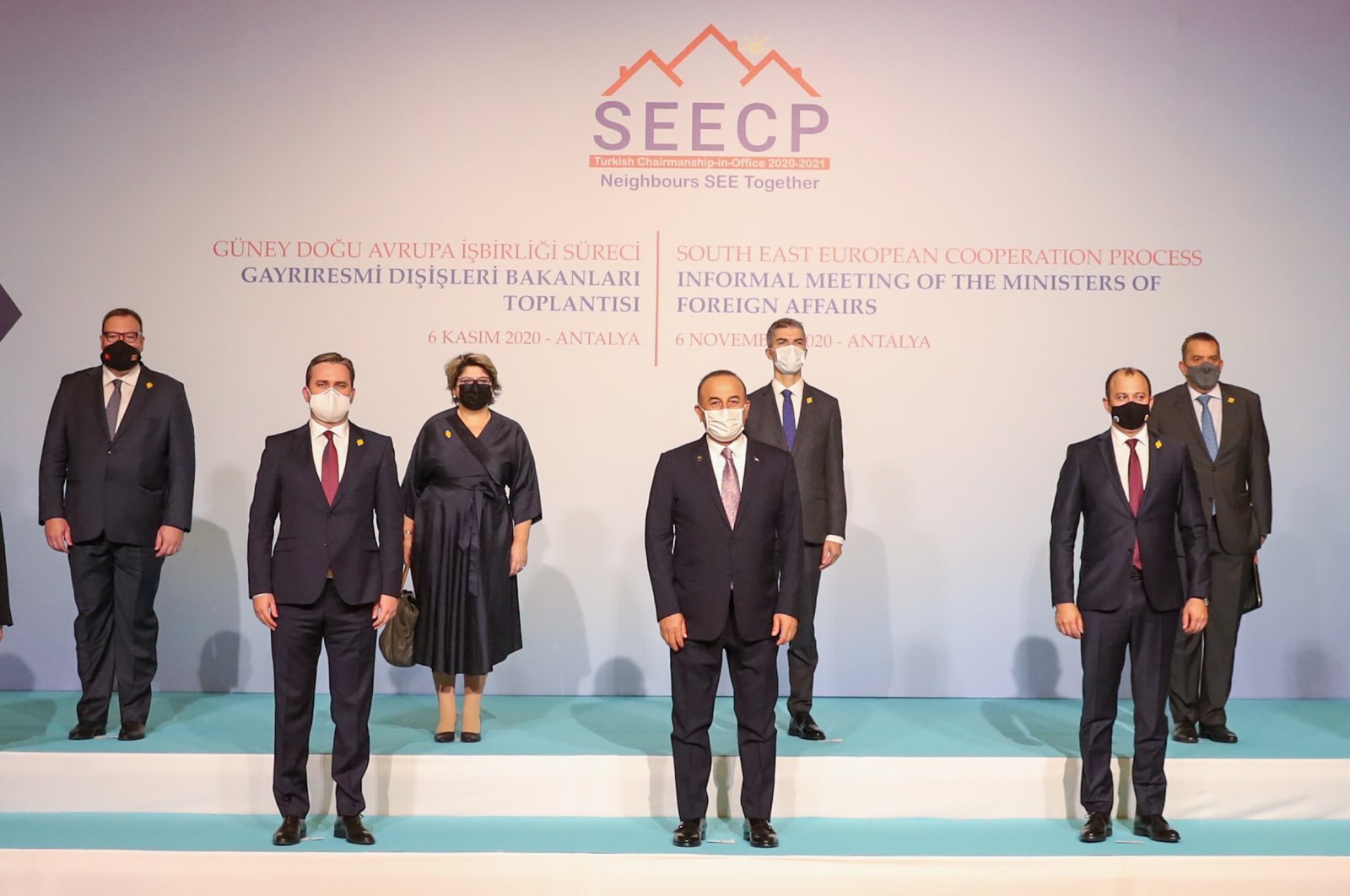 Trends such as rising populism, xenophobia, racism and Islamophobia in Europe have eroded the values represented by the European Union, Turkey’s Foreign Minister Mevlüt Çavuşoğlu stated on Friday.

Speaking at the opening of the informal meeting of the South East European Cooperation Process (SEECP) in Turkey's Mediterranean province of Antalya, Çavuşoğlu told his counterparts that the EU integration process was the pioneer for change and development for many regional countries, especially in the 1990s and early 2000s.

Turkey, a country which has integrated with the EU in many areas, hopes the bloc is successful and in line with its founding ideals, Çavuşoğlu stressed, adding that Ankara also wishes the EU to "unite" rather than be "discriminative."

Çavuşoğlu also said that France censoring a cartoon depicting its Education Minister Jean-Michel Blanquer was another example of its "hypocrisy" and "double standard" following last month when French President Emmanuel Macron allowed the publishing of insulting cartoons depicting the Prophet Muhammad under the pretext of freedom of expression. A statement that sparked outrage in the Arab and Muslim world.

He added that while these countries feel free to attack the holiest of values under the guise of freedom of speech, they consider any criticism an attack when it is about themselves.

Welcoming the EU's decision to start "belated" accession negotiations with Albania and North Macedonia, Çavuşoğlu stated that Ankara does not find the separation of the West Balkans and Turkey right as it “ignores the status of Turkey's EU accession."

He noted that Turkey's strategic priority is to gain full membership to the EU and called on the bloc to be "visionary and stick to its principles and pledges."

The top diplomat said that for around 25 years, Turkey has taken significant steps to improve regional cooperation and solidarity through the SEECP and added: "We aim to strengthen this cooperation during our presidency that we have undertaken for the third time."

"We have set our priorities by considering our common challenges such as human capital flight, intra-regional connectivity, migration and trade," he said, adding that these are common problems that need common solutions.

Touching on the worldwide coronavirus pandemic, Çavuşoğlu said it reminded everyone of the importance of global and regional cooperation.

He said Turkey responded to the medical supply demands of 155 countries within the framework of its humanitarian foreign policy.

"We helped 91 foreign nationals in many evacuation operations," he said, referring to the early stages of the pandemic when countries closed their air spaces to curb the virus' spread.

People and economies have adapted to the new normal, and all countries should act in coordination, sharing their experience in fighting the pandemic, Çavuşoğlu added.

Founded in 1996, the SEECP includes 13 countries from southeastern Europe and promotes regional cooperation in diverse sectors.

Çavuşoğlu on Thursday separately met with his Serbian counterpart Nikola Selakovic and First Deputy Prime Minister of Kosovo Besnik Tahiri ahead of the SEECP meeting.

"(We) discussed bilateral and regional issues," Çavuşoğlu wrote on Twitter after meeting with Tahiri, highlighting the amicable bond with the Kosovar people.

The Turkish foreign minister expressed hope that justice will be served and that Turkey will continue to support Kosovo.

Kosovo's President Hashim Thaci earlier on Thursday announced his resignation after a war crimes indictment prepared by the Kosovo Specialist Prosecutor's Office in The Hague was accepted by the court.

Writing on Twitter about his meeting with the top Serbian diplomat, Çavuşoğlu said he once again congratulated Selakovic for his appointment as foreign minister.

"(We) discussed preparations of 3rd High Level Cooperation Council (meeting). (We) will further our cooperation in economy, transportation & education," he said.