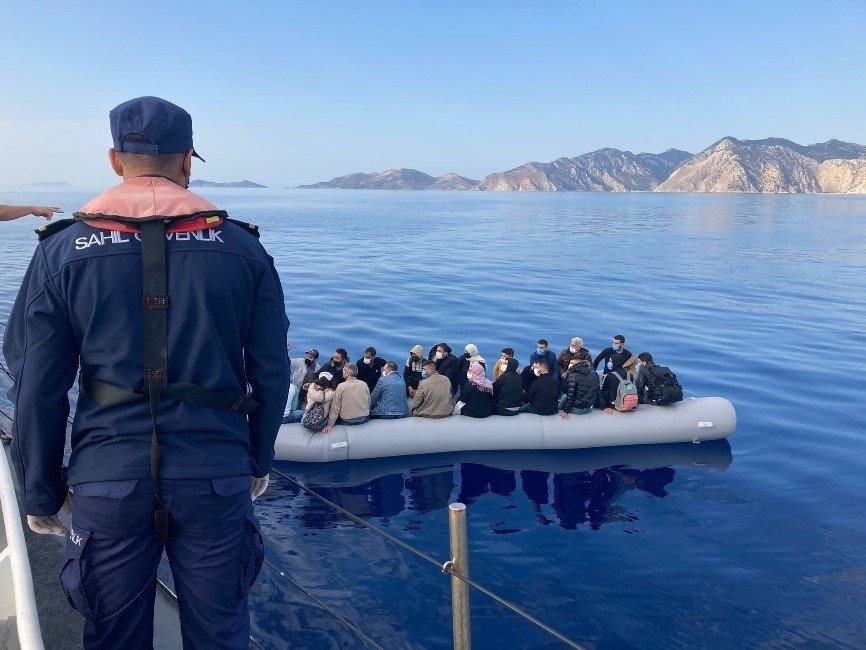 As security forces continue their efforts to tackle irregular migration and dissuade migrants from setting off on dangerous journeys and risking their lives, 21 migrants were held in southern Hatay province on Sunday and seven were rescued in the Aegean Sea.

Provincial gendarmerie teams in Hatay’s Antakya district carried out an operation after receiving information about foreigners who had entered the country illegally. Within this scope, 21 Syrian origin migrants were found and sent to the provincial migration directorate.

Meanwhile, as many as seven irregular migrants were rescued in the Aegean Sea off western Turkey, while search and rescue operations continue for three others, the country's Coast Guard Command reported on Saturday.

The coast guard said in a statement that a helicopter, two boats and a diving team had been dispatched to the area on Friday evening upon receiving information that a boat was sinking off the coastal town of Bodrum in Muğla province.

Seven irregular migrants were rescued from the sea and taken ashore in good health.

Turkey has accused Greece of large-scale pushbacks, summary deportations and denying migrants access to asylum procedures, which is a violation of international law. Ankara also accuses the EU of turning a blind eye to this blatant abuse of human rights.

Most recently, a German weekly reported that Greece adopts "brutality against asylum seekers" as policy.

The EU has clear rules regarding the treatment of asylum-seekers, giving them the right to apply for asylum once they are within EU territory. But Greece violates these rights, Der Spiegel noted last week.

It drew attention to a policy of violent brutality and systematic pushback by Greek authorities, including police, special forces and coast guard units, saying, "They contradict the values that European politicians consistently evoke."

Kyriakos Mitsotakis was once considered a liberal in his conservative political party New Democracy, it noted, adding that he has "radically tightened his country's migration policies" once he took over the power.

Greek border guard units killed at least two migrants when they tried to cross the Turkish-Greek border in February 2020 – an incident that Mitsotakis evocatively called an "invasion" – Der Spiegel reiterated.

Also, despite the denial of the Greek government that insists they adhered to European and international law, Der Spiegel noted that it has evidence refuting the Greek counterclaims.