Thousands in Germany call on EU to open borders to migrants 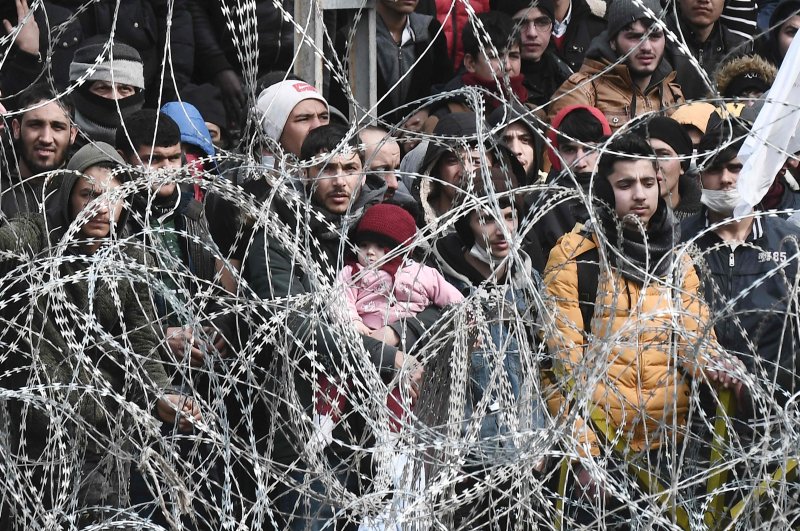 This picture taken from the Greek side of the Greece-Turkey border near Kastanies, shows migrants waiting on the Turkish side on March 2, 2020. (AFP Photo)
by Anadolu Agency Mar 04, 2020 12:12 pm
RECOMMENDED

Thousands of protesters rallied in the German capital Berlin late Tuesday, calling on the European Union to open its borders to migrants.

Gathering at a large rally organized by the Seebrücke (Sea Bridge) movement, they criticized the EU's migration policy with slogans like "Open borders!" and "Save lives!"

A speaker at the demonstration said Greece's decision not to accept any new asylum applications for one month is contrary to human rights.

The protesters also called on EU countries to accept refugees who are at the Greek border.

The conflict in Syria that started in 2011 has killed hundreds of thousands of people and forced more than 5 million people to flee, while more than 7 million are internally displaced. Refugees mainly took shelter in Turkey, Jordan and Lebanon, with Turkey hosting the largest number of refugees. Some have sought to reach Europe via the Aegean and Mediterranean seas, but thousands have died en route to Greece and other coastal countries.

Ankara has often criticized the international community for not providing sufficient humanitarian aid for the refugees in Turkey and not taking in more refugees. Turkish officials have also been calling on world powers to take action to prevent a humanitarian crisis in northwestern Syria’s Idlib province, where the Bashar Assad regime is indiscriminately targeting civilians, prompting a new influx of migrants toward Turkey.

Turkey has been telling European and other countries that it will not be able to handle another wave of migrants as it already hosts over 3.7 million Syrian refugees, and officials have been criticizing the international community for remaining indifferent to the calls and the dire humanitarian situation in northwestern Syria.

Frustrated about broken promises and overwhelmed by already hosting almost 4 million refugees, President Recep Tayyip Erdoğan announced Friday that Turkey would no longer prevent migrant crossings. Several thousands of migrants have gathered at the Turkish-Greek border in the past few days.

More than 130,000 irregular migrants have crossed into Europe since the policy change, made on the assertion that the EU has not fulfilled the promises it made as part of a 2015 agreement reached on the refugee crisis.

Greece's response to irregular migrants and asylum seekers has been harsh, with many battered and tear-gassed, and at least two killed by Greek security forces.