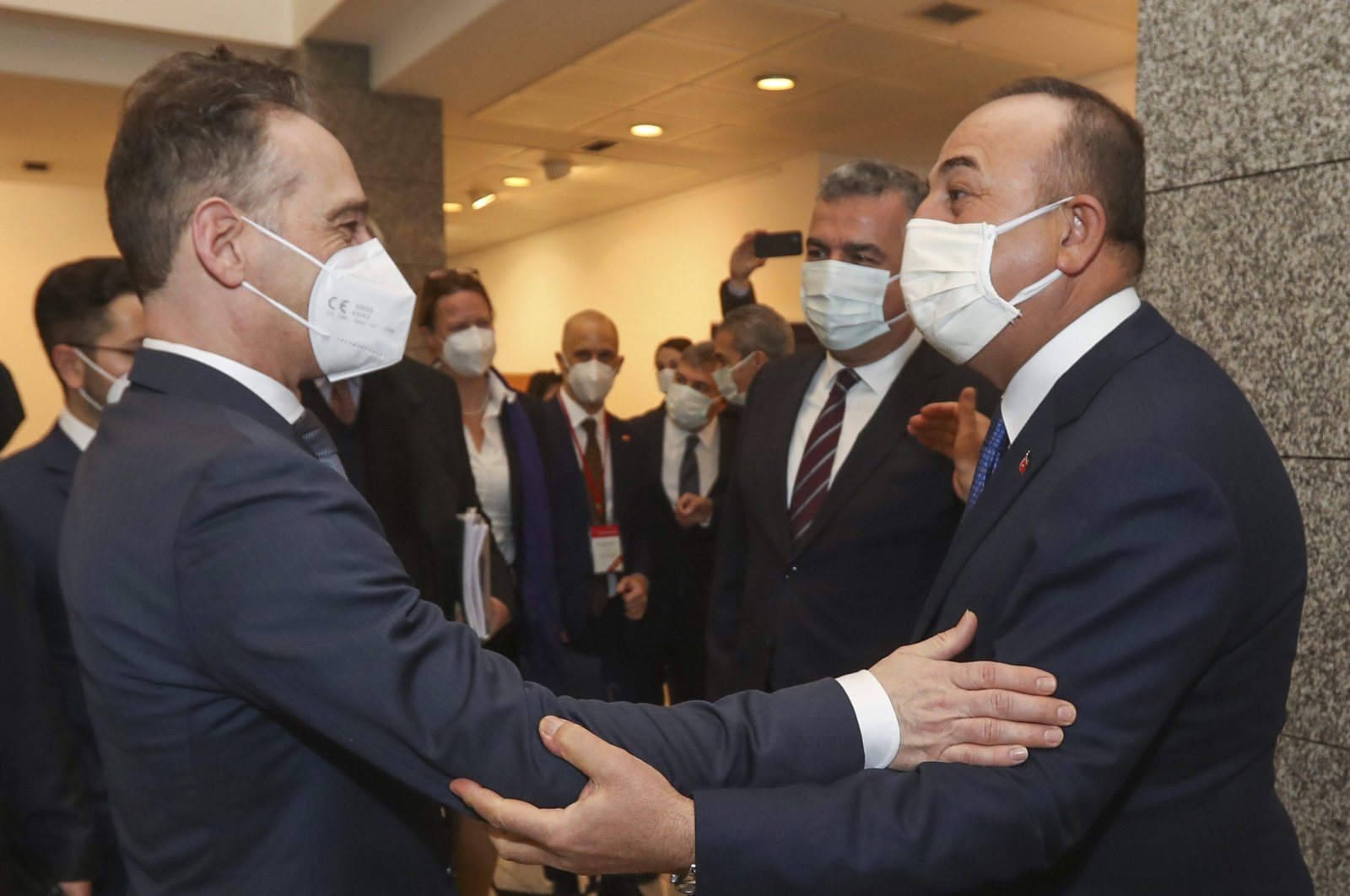 The German and Turkish foreign ministers have confirmed Ankara and Brussels' readiness to re-establish ties as 2020, a rocky year for bilateral relations, is left behind with hopes that dialogue can resolve the Eastern Mediterranean dispute

Ties between Turkey and the European Union are in a better place now thanks to constructive steps taken by Europe, Foreign Minister Mevlüt Çavuşoğlu said Monday.

"We are not engaging in new initiatives toward the EU because of sanctions. We decided to approach the EU because of their constructive stance toward Turkey during the union’s December summit," Çavuşoğlu expressed during a joint news conference with his German counterpart Heiko Maas in the capital Ankara.

Maas agreed with Çavuşoğlu on opening a new chapter in bilateral ties. "Our efforts are for establishing constructive and sustainable ties between Turkey and the EU," he said.

Last week, Çavuşoğlu, alongside President Recep Tayyip Erdoğan, held a meeting with EU ambassadors in Ankara, during which Turkey's intention to restore strong bilateral ties with the union was highlighted.

Turkey is ready to set a "positive agenda" with the EU, including a long-term perspective, the president said during the meeting, adding that relations must get back on track. Erdoğan said last week in a statement that Turkey prioritizes the EU in its agenda and sees its future in Europe.

Ankara hopes to start afresh with the bloc in the new year, the president said, adding that interactions with the EU in 2020 were unproductive due to the artificial problems created by certain EU members.

Turkey after dialogue in East Med

As far as the Eastern Mediterranean crisis is concerned, Çavuşoğlu said Monday that the 61st exploratory talks with Greece will start next week. "We will discuss the topics that we have talked about at the previous 60 (talks)," he said.

"If Greece insists on not cooperating, then the responsibility of any tension between the two countries will be on Athens' shoulders," the foreign minister warned, noting that so far the dialogue process has been interrupted multiple times due to the Greek side's reluctance to participate.

Turkey and Greece announced last week that they will resume the 61st round of exploratory talks on Jan. 25 in Istanbul.

The first round of talks was initiated between the two countries in 2002. The most recent, 60th round was held in Athens on March 1, 2016. After this date, bilateral negotiations continued in the form of political consultations but did not return to an exploratory framework.

Talks are expected to focus on bilateral disputes, including maritime boundaries and drilling rights in the region.

Turkey, which has the longest continental coastline in the Eastern Mediterranean, has rejected maritime boundary claims by Greece and the Greek Cypriot administration, stressing that the excessive claims violate the sovereign rights of Turkey and the Turkish Cypriots.

Ankara sent several drillships to explore for energy in the Eastern Mediterranean last year, asserting its rights in the region, as well as those of the Turkish Republic of Northern Cyprus (TRNC).

Ahead of his visit, earlier in the day, Maas urged a “solution-oriented” dialogue between Turkey and Greece to overcome ongoing disputes between the two countries and de-escalate tensions in the Eastern Mediterranean. Maas said Germany welcomes recent diplomatic initiatives by Turkey and expects this positive momentum to continue.

“The announcement by Turkey and Greece that they will resume the exploratory talks, which had been interrupted since 2016, is an important first step,” he said.

“During Germany’s EU presidency in the last six months, we have made strong efforts for the resumption of direct talks between Turkey and Greece. The start of these talks now offers a real chance of permanent de-escalation in the Eastern Mediterranean,” Maas added.

Maas further said that Turkey has not only made positive statements about dialogue but also has taken concrete steps in recent weeks to contribute to de-escalation in the region and ended some of its drilling activities ahead of schedule.

“The positive momentum we have witnessed in the past few weeks must continue in order to restore the lost confidence and create the basis for a solutions-oriented dialogue,” he said.

Çavuşoğlu, however, also criticized Greece for its lack of a constructive approach toward Turkey in this process. "Despite our offer of dialogue, Greece continues its attempt to provoke Turkey, which can be seen by the Greek archbishop’s Islamophobic remarks," he said.

The foreign minister noted that the Greek archbishop's remarks were the first time that a top religious figure has made an anti-Muslim statement.

The archbishop Ieronymos II of Athens said Saturday in a televised speech that "Islam is not a religion but a political party and pursuit, and its followers are people of war."

“They are the people who spread, this is characteristic of Islam,” he continued, referring to Ottoman Sultan Mehmed II, known as Mehmed the Conqueror, who conquered Istanbul in 1453, causing the Byzantium Empire to collapse.

Turkey's Foreign Ministry on Sunday condemned remarks by the Greek archbishop against Islam and Muslims. In a statement, the ministry said Islam is a religion of peace based on tolerance and compassion that ensures the coexistence of other religions and civilizations.

"It is regrettable to defame our sacred religion. Everyone should strive to develop an environment of mutual respect and tolerance amid the global pandemic that the whole world is going through," it said.

It emphasized that the provocative statements of Archbishop Ieronymos II, which incite society to hostility and violence against Islam, also show the frightening level that Islamophobia has reached.

It noted that the reasons behind increasing racism, Islamophobia and xenophobia in Europe arise from such malign ideas. The statement added that it was a deliberate and unfortunate step toward undermining preparations for exploratory talks.

The country's unwelcoming stance toward its Muslim population is not a new phenomenon. For instance, up until recently, Athens was known as the only European capital without a mosque, even though there are an estimated 300,000 Muslims living in the greater Athens area.

In November, for the first time since the 19th century, Athens witnessed the inauguration of an official mosque, as years of efforts by the Muslim community finally paid off. Greece was under the rule of the Ottoman Empire for centuries, until 1829 when the Greek population succeeded in gaining independence from the empire. At the time, there were many mosques and other Ottoman architecture all over Greece. However, the riots and independence movement triggered a wave during which all such architecture was damaged or removed, eventually leaving Athens without any mosque. In fact, Athens' lack of mosques is a norm for the majority of Greek cities as the only officially sanctioned mosques in the country are in the northern border region with Turkey, where up to 150,000 members of a Muslim minority live.

Maas, on the other hand, stated that although he has no personal acquaintance with the archbishop and had not heard of the infamous remarks, Germany has a clear stance on the issue.

"As the German government, we are taking serious measures against Islamophobia, not only through words but through serious actions. We support freedom of religious expression," he said.

Çavuşoğlu also noted that "Turkey and Germany agree to revive bilateral dialogue in the coming days."