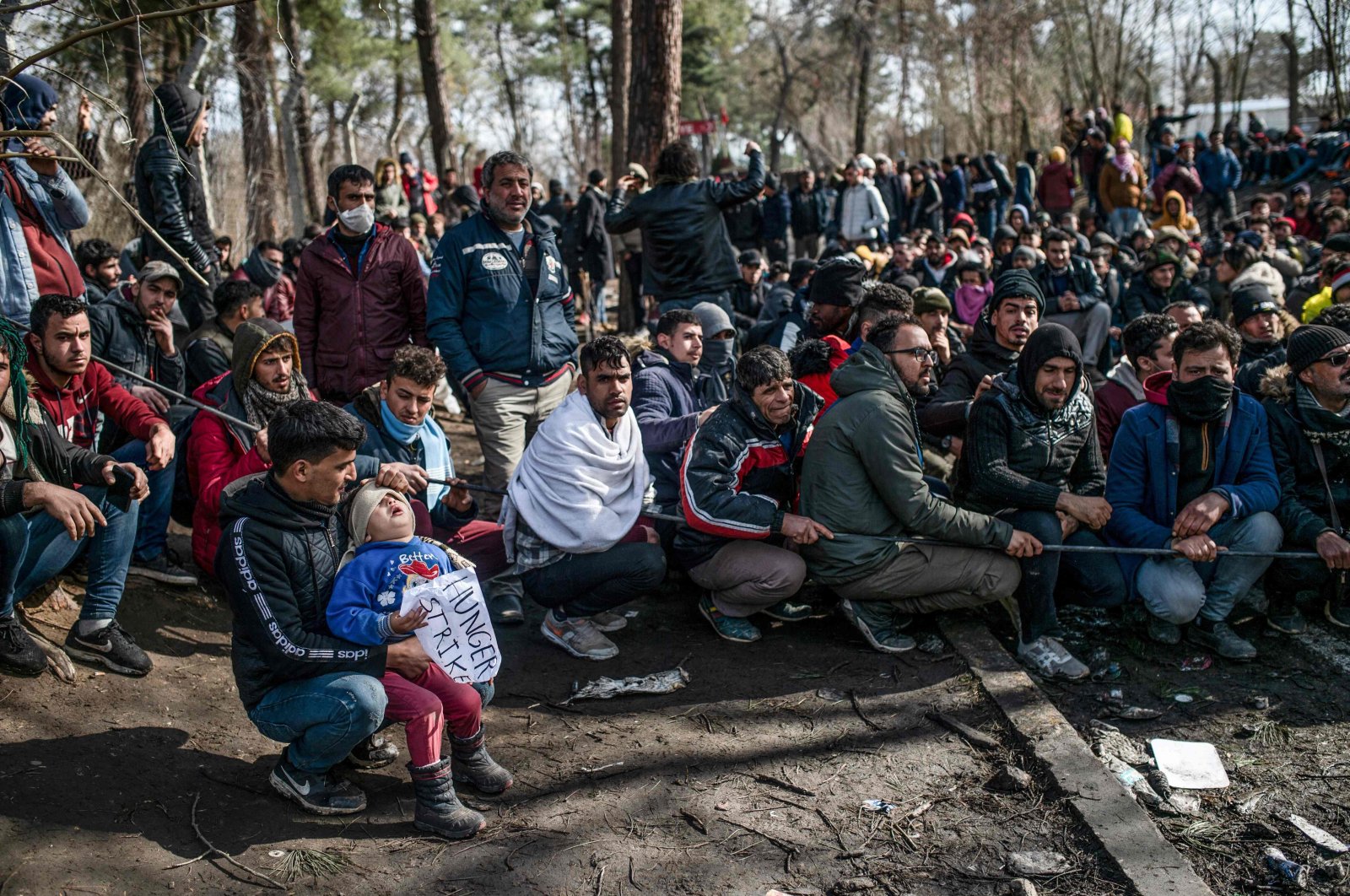 In addition to EU’s failure to deliver on previous commitments, future steps to solve migration crisis and financial aid for refugees will likely be discussed at the meetings

President Recep Tayyip Erdoğan is expected to arrive in Brussels on Monday for a single-day official visit to meet the leaders of the European Union and discuss the latest situation on the refugee deal signed in 2016 between Turkey and the bloc.

The meeting comes at a critical time when the relations between Ankara and Brussels have been strained after Turkey’s decision to allow refugees and migrants who do not have the proper paperwork to cross through its borders to Europe.

During the meeting, six issues are expected to dominate the agenda: the lifting of visa restrictions for Turkish citizens, amendments to the customs union, Turkey’s latest open-door policy for refugees, financial aid for refugees, the humanitarian crisis taking place within the Turkish-Greek border and the evaluation of Turkey’s accession process.

Updating the 2016 deal based on the current conditions is another option on the table. Greek Prime Minister Kyriakos Mitsotakis said Friday that the EU-Turkey pact is "dead."

"I will have a meeting with European Union officials tomorrow in Belgium," Erdoğan said on Sunday, adding he would discuss the migration issue.

"I hope I will return from Belgium with different outcomes," he added.

President Erdoğan has been involved in heavy diplomacy traffic about the developments in northern Syria’s Idlib and the refugee crisis.
As part of the diplomatic efforts, he talked with several European leaders on phone and held a face-to-face meeting with the EU Council President Charles Michel in the capital Ankara.

During the meeting, Erdoğan reiterated that Turkey fulfilled its responsibilities stated in the deal; however, the EU did not fully honor its commitments in response. At the end of the meeting, the two agreed on a summit to discuss the issues between Ankara and Brussels.
In the summit, Erdoğan is also expected to express Turkey’s concerns about the violence carried out by Greek authorities against migrants and refugees on their borders and to call on all EU members to fulfill their responsibilities as per international law on refugees.
The EU’s double standard on the refugee issue is another concern for Turkey. Ankara has long complained about the EU countries’ indifference on refugees, imposing the burden on Turkey’s shoulders.
In addition to reminding the EU of its previous commitments, Erdoğan is also expected to urge the bloc to decide on future steps for refugees. The financial aid for Syrian refugees and Turkey’s new open-door policy are issues to be evaluated for the near future.
Erdoğan last week said Turkey rejected Europe's offer of 1 billion euros ($1.13 billion) in migrant aid because Ankara has already spent $40 billion and would find a way to manage that fund, underlining the lack of sufficient contributions from the bloc.

In March 2016, Ankara and Brussels signed an agreement to reduce the number of migrants embarking on the dangerous Aegean Sea route and to find a solution for the influx of refugees heading to the EU countries.

According to the deal, Turkey was promised a total of 6 billion euros ($6.77 billion) in financial aid, which was initially designed to be given to the country in two stages and to be used by the Turkish government to finance projects for Syrian refugees. Visa freedom for Turkish citizens was also a perk of the agreement. Lastly, the customs union was to be updated.

In exchange for these promises, Turkey took responsibility for discouraging migration through the Aegean Sea by taking stricter measures against human traffickers and improving the conditions of Syrian refugees living in Turkey. Despite significant developments in the control of migration traffic, the EU did not deliver on its commitments stated in the deal.

Although the first stage of funding was provided to Turkey, the EU has yet to fulfill the second stage and other provisions of the deal such as the visa-free deal for Turkish citizens and updating the customs union. Turkey currently hosts some 3.6 million Syrian refugees, more than any other country in the world. Ankara has so far spent $40 billion on the refugees, according to official figures.

Ankara has repeatedly complained that Europe has failed to keep its promises under the 2016 EU-Turkey refugee deal to help migrants and stem further migrant waves. Ankara also has frequently criticized the lack of financial and humanitarian support from the international community for refugees living in the country and has warned the European countries about new possibilities of migration waves.

As a response to the lack of humanitarian and financial aid from the international community, President Recep Tayyip Erdoğan warned European countries that Turkey could not handle a new migration wave and will have to open the doors of its borders, allowing a refugee influx toward Europe in the case of such a migration wave.

The latest humanitarian crisis in northwestern Syria's Idlib caused by Assad regime attacks has forced nearly a million people to move near the Turkish border for refuge.

As a result, Turkish officials announced last week that they would no longer try to stop migrants from reaching Europe. Since then, thousands of migrants and asylum seekers have flocked to the Turkish province of Edirne along the border with Greece and Bulgaria to make their way into Europe.

Many have been camping near the border on the Turkish side, hoping to cross despite Greek insistence that its border is closed. Greece has been widely criticized for using force, including water cannons and tear gas, to repel incoming migrants.

Turkey's decision on asylum seekers was made after 34 Turkish soldiers were killed by forces of Syria’s Bashar Assad regime in Idlib in northwestern Syria. The Turkish soldiers were working to protect local civilians under a 2018 deal with Russia under which acts of aggression are prohibited in the region.

Most recently, the Turkish Foreign Ministry said that the EU should fully implement the March 2016 agreement, also emphasizing the importance of the 1951 Geneva Convention and international law regarding migrant rights amid the refugee influx toward Europe.

“All EU countries, including Greece, should accept their responsibilities stemming from international law and receive asylum applications. With that said, Greece has announced that it has suspended asylum processes. The EU is turning a blind eye to the violation of EU and international laws,” the ministry added.

Saying that the bloc even refrains from calling people demanding asylum “refugees” and instead calls them “immigrants,” the ministry added that it is hypocritical that the EU is in contradiction with its own values and doctrines by supporting Greece’s violations.

“It is clear that the EU has failed to grasp the extraordinary burden Turkey faces and the efforts it makes regarding the migration and security issues,” the ministry stated.

In another statement to the CNN International network, Presidential Communication Director Fahrettin Altun on Saturday said Turkey hosts more refugees than any other country and has been a "bulwark against irregular migration from Syria and elsewhere."

He said Ankara has repeatedly complained that Europe has failed to keep its promises under a 2016 EU-Turkey refugee deal to help migrants in Turkey and stem further migrant waves.

"The European Union has failed to keep its promises, including financial aid and voluntary humanitarian admission, under the 2016 agreement. As a result, Turkey had to divert its resources away from stopping the refugee flow to Europe and instead prepare for a potential influx from Idlib. Instead of playing the blame game, we urge Greece and the rest of the international community to address the root cause of irregular migration, namely the ongoing civil war in Syria,” he said.