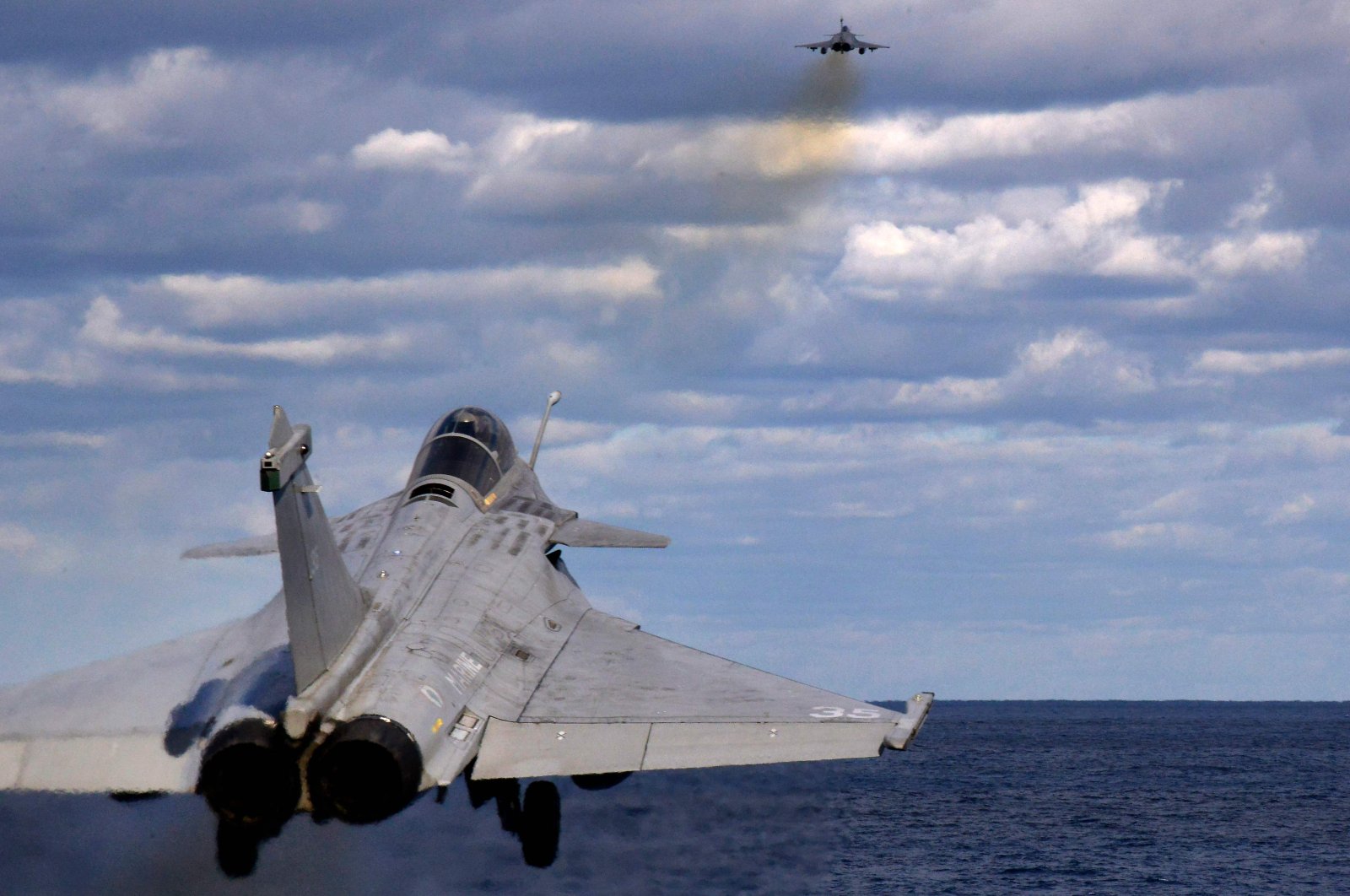 As tensions in the Eastern Mediterranean flare ahead of the EU leaders' summit next week, Ankara urged the bloc and the French president to give up on their biased, pro-Greece stance under the pretext of 'EU solidarity'

Turkish Defense Minister Hulusi Akar said Friday that French President Emmanuel Macron adds fuel to the fire in the region, making it harder to solve problems in the Eastern Mediterranean, while the European Union is similarly adopting a "biased and prejudiced" stance toward Ankara.

"Macron is going after some roles to conceal his own problems. He comes from thousands of kilometers away and tries to seize a role in the Eastern Mediterranean. We are protecting our own rights and laws. We've always said and will continue to say we are ready to pursue dialogue with our neighbor Greece," Akar told British broadcaster, Channel 4.

Tensions in the Eastern Mediterranean have been on the rise in recent months due to disputes over drilling activities and maritime zones.

"He is trying to take on the role of Napoleon, who died 200 years ago. But we can all see that he is neither powerful enough nor tall enough to do it," Akar said, "We are not pursuing any kind of imperialistic aims. Here we are protecting our rights and the law."

The animosity between Turkey and France has been mounting since Macron warned in November that NATO's lack of response to a Turkish operation against terrorism in northern Syria showed that the alliance was undergoing "brain death."

Turkey, on the other side, has frequently decried French support to the YPG, a terrorist organization linked to the PKK and recognized by the U.S. and the EU, in Syria

Back in April 2019, Macron hosted a delegation of the so-called SDF, which is dominated by the YPG terrorist group. Macron assured the YPG representatives, who were not named, of the "active support of France in the fight against Daesh which continues to be a menace for collective security," the presidency said in a statement. France also ignores the strong presence of the PKK within its borders.

The two countries also have been at odds due to the war in Libya, in which Turkey backs the United Nations-recognized Government of National Accord (GNA) in Tripoli in the conflict against putschist Gen. Khalifa Haftar. France is suspected of backing the warlord despite no official statements of support.

Stressing that Turkey has a coastline of around 2,000 kilometers (1,243 miles) on the Eastern Mediterranean, Akar said Greece has militarized some islands in the Aegean Sea in violation of international law. The minister said this posed a threat to Turkey and was ignored even though it did not comply with the notion of good, neighborly relations.

EU has no authority to set up rules

The defense minister pointed out that mentioning sanctions incessantly was a kind of threat and did not serve any purpose other than escalating tensions. "These contribute not to a solution but a deadlock. The EU has no authority to set up rules, change rules or determine borders here," Akar said.

Turkey says the EU unfairly backs Greece in a maritime dispute that stretches back decades but only gained added importance with the discovery of large natural gas deposits in recent years.

The standoff appeared to be cooling off when Turkey's Oruç Reis research vessel and its accompanying fleet of warships ended their monthlong mission and pulled back to shore last weekend. Even though Turkey stressed that the vessel was only undergoing planned maintenance and would soon continue its exploration in the Eastern Mediterranean, technical meetings between Turkish and Greek military delegations to discuss ways to reduce the risk of a clash were initiated. The fifth round of talks will be held next week.

"Our Greek neighbors are reluctant and slow down the talks with a range of preconditions," Akar said, indicating that Turkey supports these talks until the end.

Reminding that Turkey was the first party to say "yes" to talks proposed by NATO Secretary-General Jens Stoltenberg earlier this month, Akar said: "However, especially Macron and the EU approach the issue in a prejudiced and unfair manner."

Turkey, meanwhile, carried out surface and air defense drills in the Eastern Mediterranean on Thursday.

Members of the European Parliament adopted a resolution on Thursday expressing "full solidarity" with Greece and the Greek Cypriot administration against Turkey's actions in the Eastern Mediterranean. The Turkish Foreign Ministry in a written statement on the same day said the decision was taken solely for the sake of solidarity among EU members and serving the "selfish" interests of some member countries.

EU leaders are set to hold a summit on Sept. 24-25 to discuss the regional tensions.

Similarly, Turkey’s Presidential Spokesperson İbrahim Kalın on Thursday also called on the EU to be an "honest broker" in diffusing regional tensions.

Kalın was speaking on the history of exploratory talks between Turkey and Greece to give a better insight into the tension between two countries, during a virtual roundtable organized by the European Council on Foreign Relations (ECFR).

"The goal of those talks was to identify issues between Turkey and Greece, not only on maritime limits but also several other issues in the Aegean islands airspace and a number of other issues."

Kalın said the exploratory talks were halted in 2016 due to several domestic political issues that Greece's Syriza government was facing at that time.

"But it didn't happen. So, the Germans stepped in, provided their good services. And we have been lucky and grateful to the Germans for doing this," Kalın said, adding the talks with German mediation focused more specifically on the maritime issues and hydrocarbon energy activities in the Eastern Mediterranean.

Turkey has sent out drillships to explore for energy on its continental shelf, citing that Ankara and the Turkish Republic of Northern Cyprus (TRNC) have rights in the region.

The presidential spokesperson criticized those who accuse Turkey of "acting unilaterally and aggressively" or "assertively," describing such comments as "unfair."

"But to be fair, it was not Turkey that began giving licenses in either the Eastern Mediterranean or around Cyprus," Kalın said.

"It was, in fact, first the Greek Cypriots – after they were accepted into the EU as a full member in 2004 and after they rejected the Annan Plan – they began giving licenses to several companies around the islands in the areas, which were disputed, which completely denied the rights of the Turkish Cypriots," he added.

Ankara has said energy resources near Cyprus must be shared fairly between the TRNC – which has issued Turkish state oil company Turkish Petroleum a license – and the Greek Cypriot administration.

Also, Kalın recalled that the Greek Cypriot administration signed several agreements with Egypt, Lebanon and Israel between 2007-2016, which, he says, reject and deny the rights of the Turkish Cypriots.

Dialogue and negotiation are key to calming tensions in the Eastern Mediterranean, said the Spanish and Maltese foreign ministers in a news conference on Thursday, following a meeting in Madrid.

"We are both trying to boost sincere dialogue and negotiation between Greece and Turkey," said Spanish Foreign Minister Arancha Gonzalez Laya, pointing to her recent trips to Ankara and Athens, where she said she was "discreetly" trying to foster conversation.

Spanish Prime Minister Pedro Sanchez has also been in discussions with his Turkish and Greek counterparts. According to Laya, Sanchez has spoken to Erdoğan twice so far this week.

"We have to help the countries resolve the conflict, not tell them what to do," said Maltese Foreign Minister Evarist Bartolo, adding that so long as problems surrounding Cyprus are unsolved, regional tensions will continue.

"History doesn't help, and geography even less so. It's difficult to find consensus, but the alternative is much worse," he said. "A military conflict would only serve to postpone a resolution."

Distancing themselves from France's pro-Greek position, the two foreign ministers said they are neutral parties that are working to facilitate dialogue between the feuding countries.