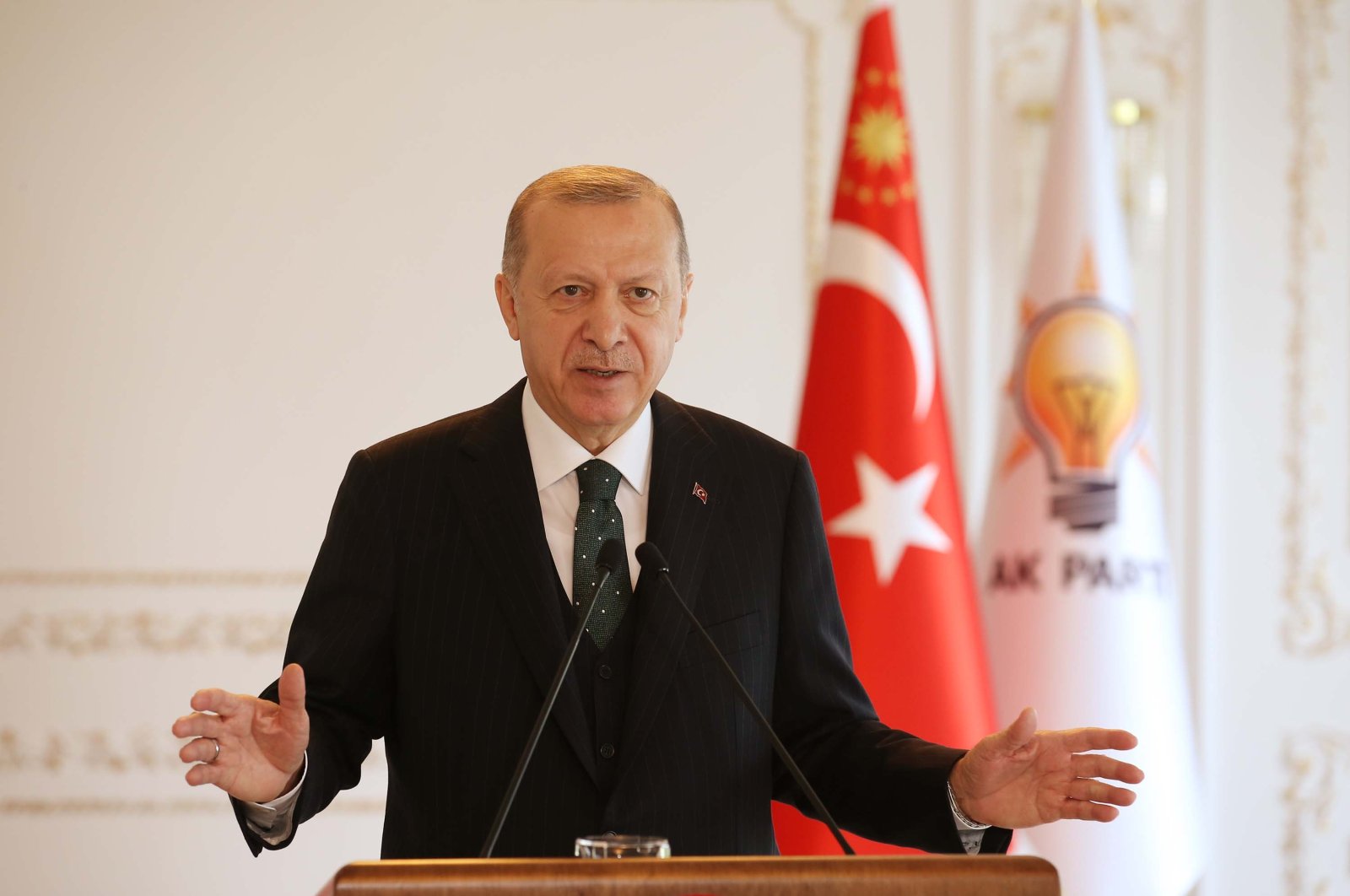 Turkey has offered an olive branch to Europe for an opportunity to restore the recently strained bilateral ties, calling on the EU to do its part in recovering the ties by fulfilling its promise to Ankara of full membership to the bloc.

"We see ourselves as an inseparable part of Europe, with which we share 600 years of historical bonds," President Recep Tayyip Erdoğan said in a live speech Sunday.

Addressing his ruling Justice and Development Party (AK Party) members for provincial congresses via videoconference, he called on the European Union to keep its promises.

"We are calling on the EU to create a closer bond with us, to keep their promise of full membership for Turkey," he said.

His statements were a follow-up to his earlier speech Saturday when he underlined that Turkey sees itself in Europe and seeks to build its future in the continent.

"We see ourselves in Europe, not anywhere else. We aim to build our future with Europe," Erdoğan said.

"We will find a proper place in the post-pandemic world by improving our judicial infrastructure, strengthening the foundations of our economy, increasing production and employment," he added.

Last week, Erdoğan said Turkey was entering a new period for both the economy and the judiciary, and that Parliament will prioritize the new judiciary reform packages next year.

He pledged a new economic growth strategy that will enable an improved climate for foreign investors, backed by an efficient judicial system, saying the strategy would be based on stability, lower inflation and international investment.

Turkey-EU ties have been at odds recently, as the conflict of interests over multiple topics caused tension between the two. The disagreement over the Eastern Mediterranean has, in particular, occupied the bilateral relations for months now.

However, two weeks after their last summit where leaders discussed economic sanctions, the EU has so far failed to persuade Ankara to stop hydrocarbon exploration in its territorial waters.

"Time is running out, and we are approaching a watershed moment in our relationship with Turkey," the bloc's foreign policy chief, Josep Borrel said last week, pointing at the serious break between the two.

Turkey, the country with the longest coastline on the Eastern Mediterranean, has sent drillships with a military escort to explore for energy on its continental shelf, saying that Turkey and the Turkish Republic of Northern Cyprus (TRNC) also have rights in the region. Turkey has demanded that the array of disagreements it has with Greece be handled as a whole. Those include territorial waters in the Eastern Mediterranean, the continental shelf, demilitarization of the islands, the legal status of geographical formations, the width of national air space and search and rescue operations.

However, Turkey's disagreements with the EU date back long before the tension with Greece over the Eastern Mediterranean.

Turkey is one of the countries with the longest history with the union, including the longest process of negotiations. The country signed an association agreement with the EU in 1964, which is usually regarded as a first step to eventually becoming a candidate. Applying for official candidacy in 1987, Turkey had to wait until 1999 to be granted the status of a candidate country. Turkey has been reportedly preparing a new initiative to accelerate the accession process to the EU. Accordingly, Turkey will complete regulations for six more chapters, including the fight against terrorism.

Yet, despite its efforts, Turkey's accession process has turned into a deadlock, with multiple disappointing actions from the EU, especially when it comes to respecting Ankara's national security concerns.

Despite recognizing the PKK as a terrorist group, Europe continues to be a safe haven for the group's wide range of activities, ignoring Ankara's warnings when it comes to the dangers of hosting a terrorist group. A similar situation is also valid when it comes to the Gülenist Terror Group (FETÖ), a group that killed 251 people in its coup attempt back on July 15, 2016. Although Turkey has expressed the group's damage to the country with evidence multiple times to EU leaders, the bloc continues to resist recognizing FETÖ as a terrorist group, while hosting many FETÖ fugitives.

These disappointments combined with Turkey's diverse foreign policy in which the country establishes strong bonds with not only the European countries and the U.S. but also Asia, Latin America and Africa have often been mistakenly interpreted as a shift of axis that stems from the country's strained ties with the U.S. and its EU accession process.

However, Turkish officials underline that Turkey values its allies and at the same time aims to increase the number of its partners in the international arena. Ankara has been stressing that enhancing ties with a specific country does not necessarily mean giving up on its current allies.

Erdoğan's video message to the 2020 Halifax International Security Forum on Saturday holds a similar message, highlighting the diverse nature of the country's diplomacy.

"None of us is safe until all of us are safe," said the president, adding that no country can afford to look at security issues through the lens of geographic proximity in today's world.

"Today, most of the crises that threaten global stability take place in our region. We, as Turkey, are fighting simultaneously with the world's most bloody terrorist organizations from Daesh to the PKK/YPG, from FETÖ to the DHKP-C (Revolutionary People's Liberation Party/Front). As a trusted NATO ally, we undertake critical responsibilities in the face of new challenges and threats facing the international community. We exert every effort to eliminate terrorist threats, to prevent conflicts and to reinforce stability."

"It is not only wrong but also impossible to confine Turkey, which is geographically an African-Eurasian country, to a narrow framework concerning diplomacy," Erdoğan said. "We cannot afford to turn our back on either the East or the West. While developing our relations with Europe, we never ignore Asia and Africa. We do not see our recently deepening cooperation with Russia as an alternative to our long-established ties with America. We attach great importance to our position in NATO, which we have been a member of for 68 years. Turkey's borders are also NATO's borders."

"I would like to underline, in particular, that Turkey has the will to continue with its struggle decisively against the threats to international security and stability," Erdoğan said.

Highlight on ties with U.S.

Erdoğan's comments on NATO come following the U.S.' welcoming of a new president, Joe Biden, whose presidency has raised questions on the country's ties with its NATO ally Turkey as Biden has not embraced an Ankara-friendly approach during his presidential race.

"We have much to offer, share with a U.S. that respects Turkey's national security interests and concerns," Erdoğan said in his Sunday speech, dismissing claims of divergence with the U.S.

Similarly, on Saturday's speech, he said: “We want to use our close alliance relations with the U.S. actively to solve all regional and global issues.”

Incumbent President Donald Trump and Erdoğan's personal relationship was well documented over the course of the former's presidency, suggesting the two were key actors in overcoming bilateral problems between the countries. Trump expressed on multiple occasions that he and Erdoğan were getting along well, while Erdoğan mentioned more than once that relations were better with the Trump administration than with his predecessor's.

When it comes to Biden, on the other hand, his remarks on the issue before his election already suggest that there will be a change in how things are done.

Biden openly suggested that the PKK's Syrian affiliate YPG should be supported in Syria while questioning the presence of NATO missiles in Turkey's Incirlik Air Base.

Just like in ties with the EU, the fight against terrorism emerges as the main topic of tension when it comes to bilateral relations of Turkey with the U.S. as well. The U.S. primarily partnered with the YPG/PKK in northeastern Syria to fight Daesh. Turkey strongly opposed the terrorist group's presence in northern Syria and the formation of a terror corridor, which has been a major sticking point in strained Turkey-U.S. relations. Ankara has long objected to the U.S. support of the YPG/PKK, a group that poses a threat to Turkey and terrorizes local people, destroying homes and forcing them to flee.

Speaking on the issue Saturday, Presidential Spokesperson Ibrahim Kalın said that Biden's stance and policies on the FETÖ and YPG terrorists will shape his relations with Turkey.

"The Biden administration has still not been formed. We will see what happens when it does," Kalın told a live broadcast on NTV, adding that the U.S. cannot just cast aside Turkey.

"The PKK and FETÖ still pose a national security threat for us," Kalın said.

Another topic of conflict with the U.S. is the purchase of the S-400 missiles from Russia.

Regarding the purchase of Patriot missiles, Kalın said Turkey negotiated for six years, but the U.S. refused to sell them, thinking that Turkey was bluffing when Ankara said it would seek alternatives.