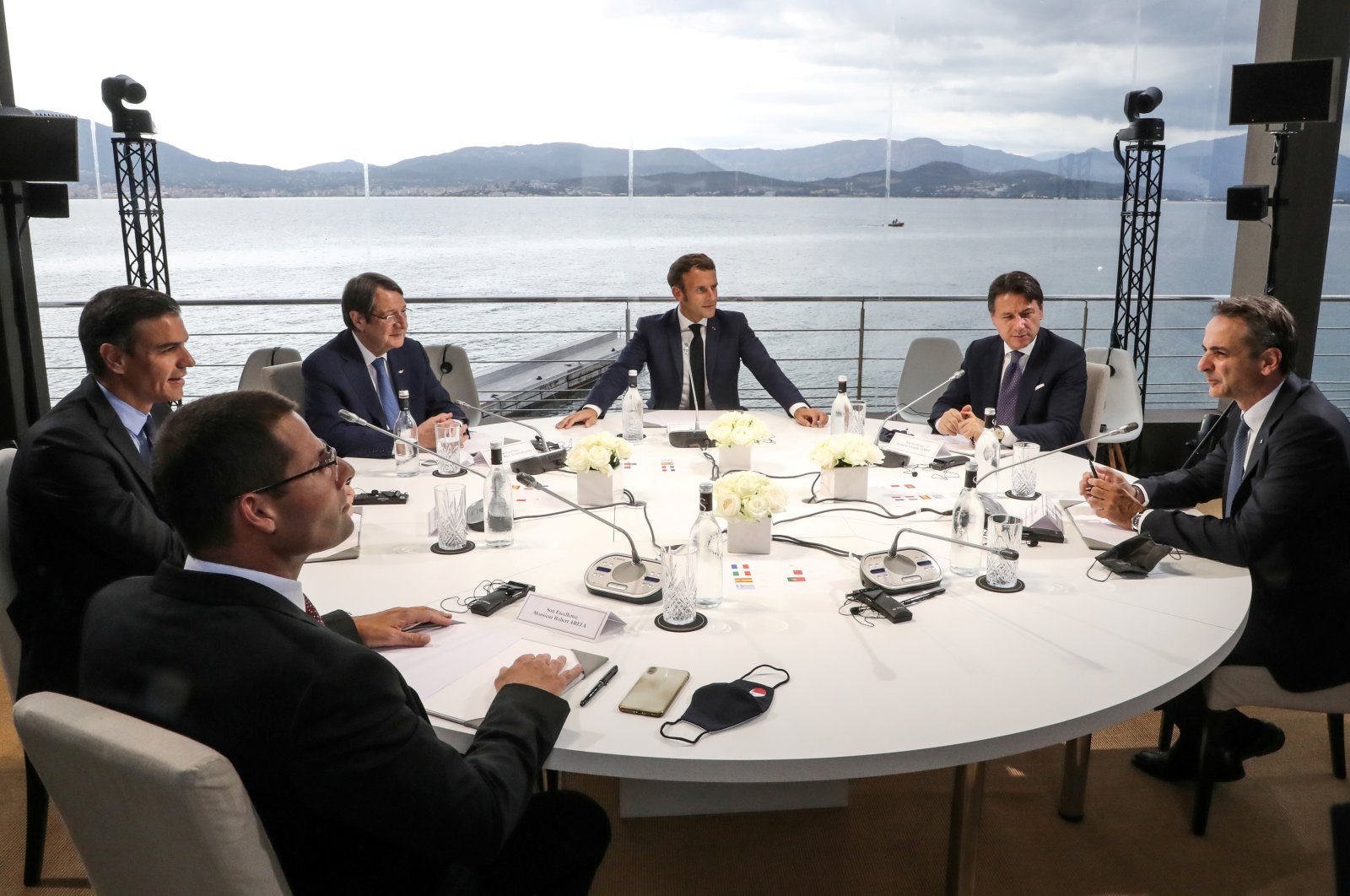 The statements on the Cyprus issue and the Eastern Mediterranean in the joint declaration accepted at the end of the EuroMed 7 meeting are biased, disconnected from reality and lack legal basis, the Turkish Foreign Ministry said Friday.

“We invite Greece to give up on its maximalist maritime zone claims that are in violation of international law. It is vital that Greece withdraws its military vessels near our Oruç Reis exploration vessel, that it supports NATO’s de-confliction talks, that it ceases to militarize eastern Aegean islands including Kastellorizo (Megisti-Meis) and that it cedes its oppression toward the Western Thracian Turkish minority that increased recently in order to de-escalate tensions,” the ministry said in a written statement.

The EuroMed 7 is an informal group of Mediterranean states in the European Union, sometimes dubbed "Club Med," that held its first summit in 2016. The club, which includes France, Italy, Spain, Malta, Portugal, Greece and the Greek Cypriot administration, met on Thursday for its sixth summit at Porticcio, a coastal resort on the French island of Corsica.

Reiterating that Turkey has the longest shoreline in the Eastern Mediterranean and is a candidate country for the European Union, the statement said that Greece and Turkey have to sit at the table without preconditions for dialogue and cooperation.

It said Greek Cypriots have to cooperate with the Turkish Republic of Northern Cyprus (TRNC), which are the common owners of the island, including the sharing of income for operating and researching hydrocarbon resources.

Greece must not abuse the EU for its own narrow-minded interests, while the EU and countries signing the declaration have to abandon their blindly unilateral and biased stance that violates international law and the EU's acquis communautaire, under the guise of solidarity, the statement said.

Meanwhile, Evarist Bartolo, Malta's minister for foreign and European affairs, is expected to pay a working visit to Turkey on Saturday to hold talks with Turkey's Foreign Minister Mevlüt Çavuşoğlu in southern Antalya province. The two top diplomats will discuss current regional and international issues including recent developments regarding Libya and the Eastern Mediterranean.

At an informal summit hosted by French President Emmanuel Macron, leaders of the so-called EuroMed 7 group warned that the European Union was ready to consider further sanctions if Turkey didn't halt its "unilateral activities" in the Eastern Mediterranean.

Greece and the Greek Cypriot administration have for weeks been sparring with Turkey about natural gas reserves and maritime boundaries.

Ankara claims the right to prospect and drill for gas in areas the two EU member states claim for their own exclusive economic zones.

On Macron's recent statements targeting Turkey, Şentop added: "France's main disturbance is Turkey's active engagement in the world, the region and especially Africa. It tries to show this disturbance by pretending to support Greece's baseless and unwarranted theses that are in violation of the law. We expect France as a NATO country to act in accordance with international law, maritime law and to abandon hypocrisy."

Macron earlier warned that Turkey was "no longer a partner" in the region, citing its maritime claims, drilling for gas in waters claimed by the Greek Cypriot administration and other "provocations."

Turkey lashed out in response to Macron's comments, with Turkey's Foreign Ministry saying the French leader was reverting to "old colonial reflexes" and should favor reconciliation instead.

Paris and Ankara are at loggerheads not only over the maritime dispute but also over Turkey's backing of the internationally recognized government in the Libyan civil war. France is on better terms with Egypt and the United Arab Emirates (UAE), who back putschist Gen. Khalifa Haftar, though Macron denies that Paris also supports Haftar.

Macron was not in a position to make decisions on maritime zones, the ministry in Ankara said, adding that France should favor reconciliation and dialogue instead.

Macron's "individual and nationalist stance encourages tension and puts the major interests of Europe and the EU at risk," the ministry said in a statement.

The Mediterranean standoff has seen Turkey send research vessels into contested waters, EU allies dispatch ships to the region to help Greece uphold its claims, and both Ankara and Athens carry out maneuvers with frigates and fighter jets.

On Friday, Turkey also issued a new Navtex for target practice in the Eastern Mediterranean off the northwestern coast of Cyprus on Sept. 12-14.