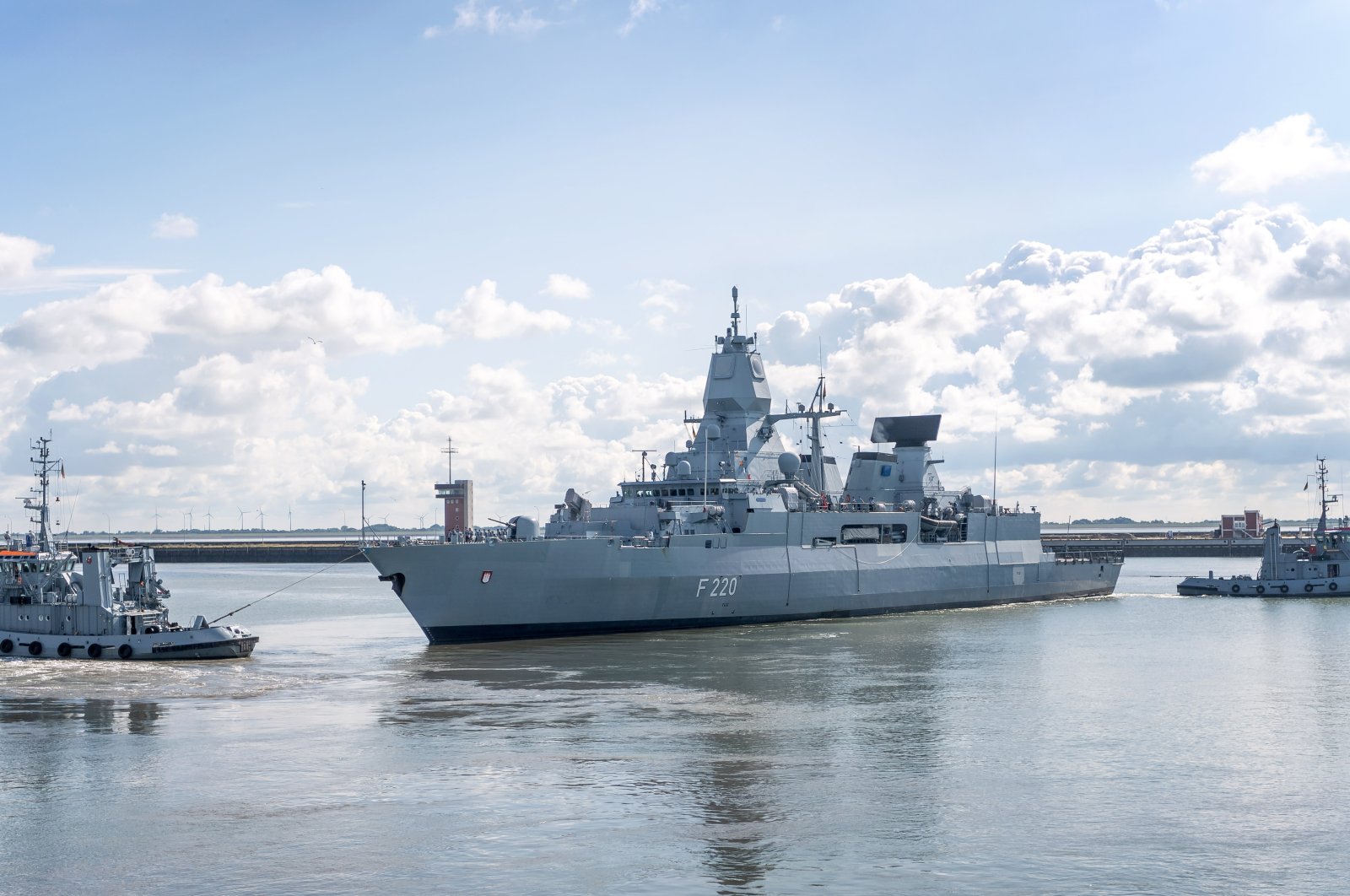 The frigate "Hamburg" runs out of the harbor for a five-month Mediterranean mission as part of the European Union's Irini operation, Lower Saxony, Wilhelmshaven, Aug. 4, 2020. (Getty Images)
by Daily Sabah with AP
Nov 27, 2020 1:54 pm

Turkish prosecutors launched an investigation Friday into the search of a Turkish commercial freighter by the crew of a German frigate participating in a European Union mission to enforce an arms embargo on Libya.

In a brief statement announcing its investigation, the Ankara Chief Prosecutor’s office said the search was conducted without “Turkey’s authorization and against international regulations.” The probe is not expected to lead to arrests or the extradition of officials involved in the search.

Turkey has protested the incident on the Mediterranean Sea, insisting personnel from the German frigate Hamburg illegally searched the Libya-bound freighter Roseline A about 200 kilometers (125 miles) north of the Libyan city of Benghazi on Nov. 22. Germany has rejected Turkey’s complaints, arguing the frigate’s crew acted correctly.

Turkey’s National Security Council (MGK) on Wednesday condemned the incident and reiterated the country’s determination to take the necessary steps against it.

The council meeting chaired by President Recep Tayyip Erdoğan expressed Turkey’s disapproval and condemnation of Irini’s “unilateral” action, believing it is against “international law” and “alliance relations,” according to a statement released after the meeting.

Turkey’s Foreign Ministry on Monday also protested the allegedly illegal interception. “Operation Irini is a sided operation. It is an operation that aims to punish the legitimate Libyan government and does not inspect arms supplies to the putschist Gen. Khalifa Haftar, and is involved in arbitrary practices,” ministry spokesperson Hami Aksoy said Monday.

According to the law of the sea, the consent of the flag state must be obtained for the personnel to board the ship in order to search the ships. Despite warnings, the Hamburg Frigate’s soldiers searched the merchant cargo vessel, which was carrying humanitarian aid, food and paint.

German officials said the order to board the Roseline A came from the mission’s headquarters in Rome and that Turkey objected while the inspection team was on the freighter. Turkey said the search was “unauthorized and conducted by force” and insisted that its objections prior to the search were ignored.

Operation Irini, which was approved by EU foreign ministers on March 31. It aims to operate in the air and sea and with satellites to ensure that all countries respect a ban on providing arms to the parties involved in the Libyan conflict. Seven countries are participating in Operation Irini, named after the Greek word for peace, including Italy, Greece, France, Germany, Poland, Malta and Luxembourg, with frigates and maritime patrol aircraft.

Although the operation aims to enforce the U.N. arms embargo on Libya’s warring sides, it mainly focuses on maritime activities in the Mediterranean, while putschist Gen. Khalifa Haftar, the enemy of the legitimate Libyan Government of National Accord (GNA), continues to receive arms and ammunition mainly by air and land, according to Libyan Prime Minister Fayez Sarraj. Russia and the United Arab Emirates (UAE) have been providing arms and military equipment to Haftar’s forces, which are also backed by Egypt and France.

Turkey and Qatar support the U.N.-backed GNA in Tripoli against rival Haftar forces based in the country’s east.

It was the second incident between Turkey and naval forces from a NATO ally enforcing an arms blockade against Libya.

In June, NATO launched an investigation over an incident between Turkish warships and a French naval vessel in the Mediterranean. France said one of its frigates was “lit up” three times by Turkish targeting radar when it tried to approach a Turkish civilian ship suspected of involvement in arms trafficking. Turkey rejected the claims and demanded an official apology from Paris.