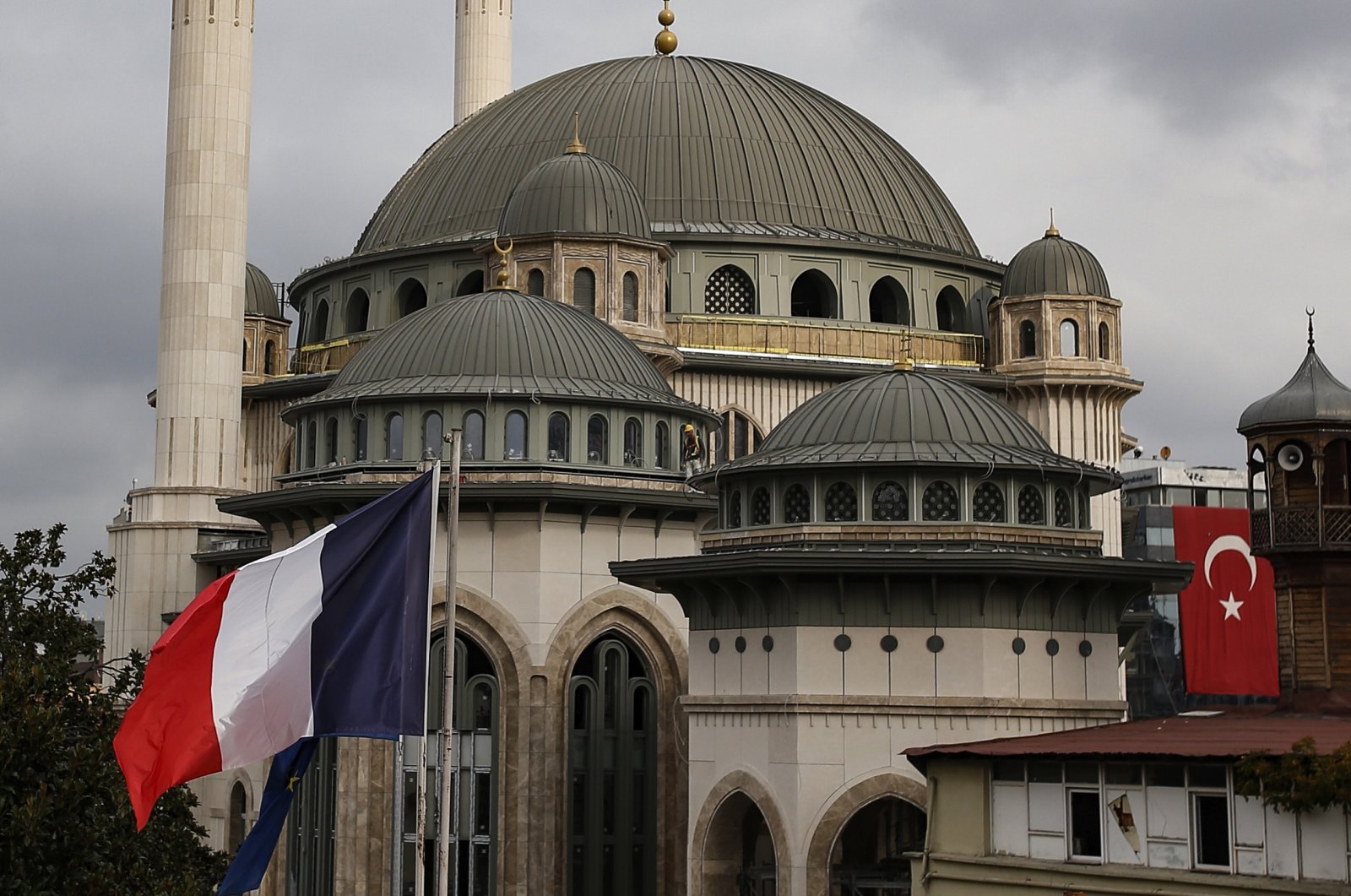 The French flag flies on the premises of the French Consulate in Istanbul, Turkey, with a mosque still under construction in the background, Oct. 28, 2020. (AP Photo)
by daily sabah Dec 17, 2020 11:39 am
Edited By Şeyma Nazlı Gürbüz
RECOMMENDED

Turkey may normalize ties with France, but Paris must change its stance toward Ankara over its operations in Syria, Foreign Minister Mevlüt Çavuşoğlu said Thursday.

Çavuşoğlu noted that his French counterpart Jean Yves-Le Drian called him and told him to stop making hostile statements against each other.

Çavuşoğlu, in response, said he urged his French counterpart to put aside the negative attitude.

"A meeting will be held in Paris today to draw a road map," he told a live broadcast on the 24 news channel.

Çavuşoğlu said Turkey welcomed Germany’s stance in the latest EU summit, contrary to France’s negative position. He said, however, the country's tone has started to soften following the summit.

“If you try to influence others to make anti-Turkey decisions in all instances, we would unavoidably criticize this,” Çavuşoğlu told Le Drian.

He also noted that Turkey does not have an issue with France, it simply reacts to the country's mistakes and hostility.

Çavuşoğlu continued by saying the EU needs to adopt a reasonable stance when it comes to Turkey so Ankara can respond the same way.

He added that Turkey plans to work with the bloc to hold a conference on the Eastern Mediterranean.

All sides would participate in the conference, according to the foreign minister, who said the Turkish Republic of Northern Cyprus (TRNC) should also be represented if the Greek Cypriot administration is.

"It is either both or none," he added.

Relations between Turkey and France have deteriorated over the Eastern Mediterranean, but the two allies disagree on other major issues, including the conflicts in Syria, Libya and Nagorno-Karabakh.

Turkish officials have decried France's interference in the Eastern Mediterranean dispute, given it has no territory in the region. Commentators have argued that President Emmanuel Macron is trying to distract from his political failures at home.

France accused Turkish warships of aggressive behavior after its warship tried to inspect a vessel in June that it suspected was violating a U.N. arms embargo on Libya, but Turkey has denied harassing the Courbet.

Macron in September said Europeans must be "clear and firm with, not Turkey as a nation and people, but with the government of President (Recep Tayyip) Erdoğan, which has taken unacceptable actions."

In response, Erdoğan warned his French counterpart Macron "not to mess with" Turkey, as tensions between the two NATO allies escalated.

“Macron is trouble for France. My wish for France is to get rid of Macron as soon as possible. Otherwise, they will have to deal with the yellow vest protesters for longer, or ‘red vests’ may appear as well,” Erdoğan said on Dec. 4.

“Macron may get angry with me. But we still have to tell the truth. He does not get how governing a state works,” he also expressed on Dec.10, during Azerbaijan’s victory parade in Baku over the Nagorno-Karabakh win.

Turkey also accused the French government of tolerating associations affiliated with the PKK and FETÖ that have been operating openly across the country for years and of leaving violence against the Turkish community and interests unpunished on the grounds of freedom of demonstration and expression.