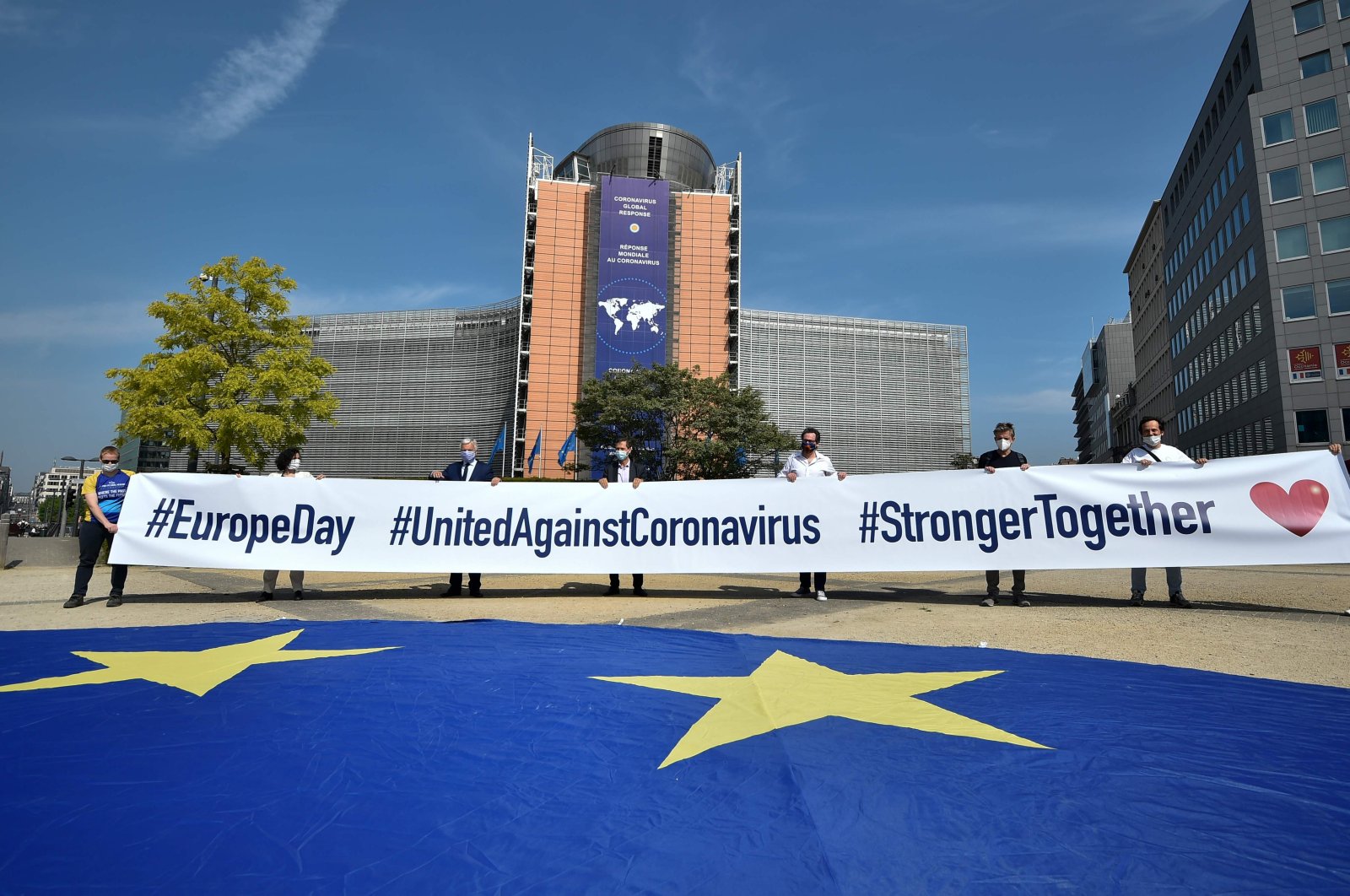 European Justice Commissioner Didier Reynders (third L) and European Commission staff members, all wearing protective face masks against the spread of the novel coronavirus, pose with a banner during events to mark Europe Day, May 8, 2020. (AFP Photo)
by DAILY SABAH May 09, 2020 3:57 pm
RECOMMENDED

Turkish officials on Saturday marked Europe Day, underlining that the EU would come out of its current pandemic-induced crisis stronger with correct and timely steps.

"The ideas behind the Schuman Declaration had ensured the rebirth of Europe from its own ashes after a war that tore apart the whole world and the gathering together of countries for peace, security, development and welfare, casting aside their differences and animosities," President Recep Tayyip Erdoğan said in a statement.

He noted that today, people are once again facing a destructive calamity and common enemy, referring to the novel coronavirus, that "threatens not only our health but also our welfare, social order and humane ties."

"This tiny enemy, invisible to the eye, has reminded us once again the meaning of 'being united,' being strong in unity, which we have risked to forget in the recent period; which we became ready to sacrifice for populist policies and short-term national interests," he added.

Europe Day, also known as Schuman Day, is observed on May 9 each year to mark the Schuman Declaration in 1950 that proposed the formation of a European Coal and Steel Community, the predecessor to the EU.

Erdoğan said that each calamity brought along with it opportunities and that he believed the EU would come out of this crisis stronger than it was before.

"I fully believe that better days will be with us when the language of discrimination and hatred is cast aside; when the common interest of our Europe is not sacrificed for petty political games or national interests; when we are inclusive and just," he said.

Erdoğan stressed that difficult days lie ahead and that Turkey would focus on combating the pandemic, economic recovery in the post-pandemic period and "steering the developments that impact on our continent as well as fighting irregular migration and terror."

Saying that these should be seen as an opportunity for Turkey-EU relations, Erdoğan said: "We must make good use of the opportunities these tough days will present in order to revitalize the Turkey-EU relations. I hope that the EU, which has assumed a discriminative and exclusionist attitude toward our country on various issues to this date, has now understood that we are all on the same boat.”

He underlined that during the pandemic, various EU member states asked for help from Turkey, and that with Ankara's health care system and measures taken against the virus the nation could "set an example" for many European and candidate countries.

Erdoğan added that Turkey was determined to attain full membership in the EU despite all the hardships the country experienced during the negotiation process.

The Delegation of the European Union to Turkey thanked Erdoğan in a statement. "We have received the EU Day Message of His Excellency President of Turkey, Recep Tayyip Erdoğan," it said in part.

Foreign Minister Mevlüt Çavuşoğlu on Saturday also commemorated Europe Day with an open call for deeper bonds to be forged between the EU and Turkey.

“I give my best wishes to all European citizens this Europe Day, especially our citizens,” he said in a statement, adding that “Turkey is open to all sincere and meaningful cooperation for our common future.”

“Turkey's attitude during the coronavirus crisis has shown that we are ready to cooperate. Therefore, we expect the EU to adopt a rational policy that goes beyond the narrow national perspectives of Member States and reflects the Union's global responsibilities, as well as the EU’s motto of ‘unity in diversity’,” he said.

Expounding on the common interests of Turkey and the bloc, he added that strengthening cooperation between Turkey and the EU in all areas was "important not only for our own interests but also for the future of our region and the international system.”

“Currently, the COVID-19 pandemic, intensifying geopolitical competition, threats against multilateralism and regional conflicts are challenging the whole world. At this time in which the international system is going through a transformation full of uncertainties and conflict, the EU needs to set up new partnerships while enhancing cooperation and solidarity with its allies” he said.

“As a candidate country, Turkey is ready to make any contribution to the EU to become a consistent, responsible and principled global actor committed to its founding values. Turkey is one of the countries posed to make the utmost contribution to the Union in overcoming these current challenges,” he added, underlining that Turkey would contribute even more to Europe’s strength if it were a member state.