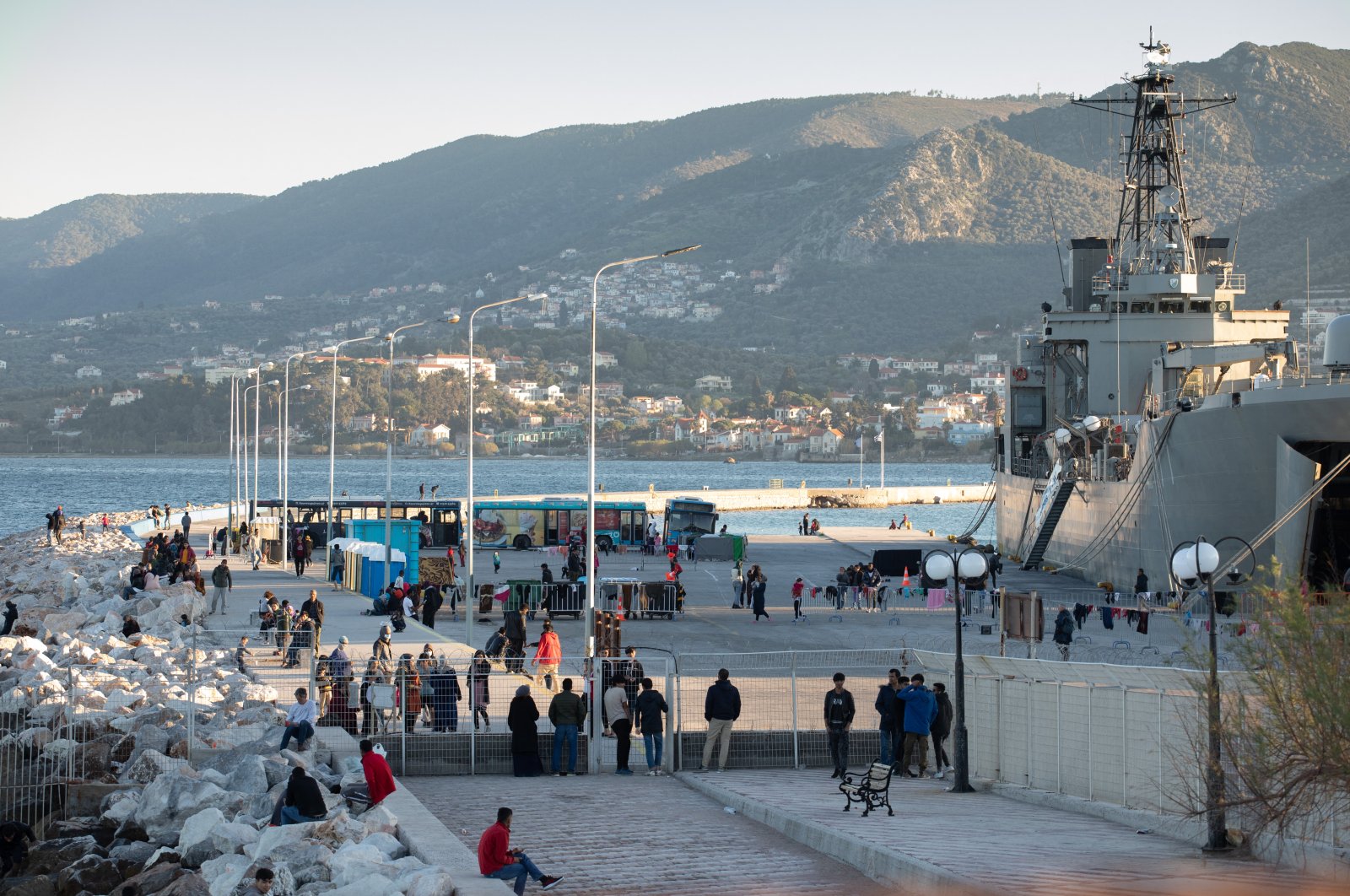 A Greek navy ship serves as a temporary shelter for 400-600 migrants who have arrived since the beginning of March in the port of Mytilene on the Greek island of Lesbos, following Turkey's decision to open its borders and Greece's decision to stop registering new asylum applications, March 15, 2020. (Reuters Photo)
by Anadolu Agency
Jul 28, 2020 11:00 am

The European Union's border force violates the law by helping the Greek coast guard block and push back asylum-seekers amd migrants who have reached Greek territorial waters instead of rescuing them, according to video footage.

The footage shows that European Border and Coast Guard Agency (FRONTEX) naval elements along with the Greek coast guard violated EU law and regulations by pushing back asylum-seekers and migrants who reached Greek territorial waters by boat, instead of rescuing them.

The FRONTEX elements can be seen blocking the boat's way, after which Greek forces arrive, take apart its fuel tank and unlawfully push it back into Turkish territorial waters.

Notably, a German ship patrolling as part of NATO elements in the region seeking to curb irregular migration witnessed the event.

During the incident, the Turkish Coast Guard Command decried the situation and told the Greek coast guard over the radio that Turkey will bring up the issue on international platforms.

Greece's violations of international laws, international maritime law, EU law and regulations, and the 2016 Turkey-EU agreement are being criticized as Greek forces push back migrants, refugees and asylum-seekers either from land or sea, and in some cases, torture and mistreat them, seize their personal belongings, put their lives at risk, and even cause their deaths.

It is estimated that over the last three years, more than 70,000 migrants and refugees have been pushed back to Turkey by Greece.

The European Parliament's Committee on Civil Liberties, Justice and Home Affairs has asked Athens to explain the pushbacks.

European members of parliament have also called for an investigation.

On July 6, Ylva Johansson, the EU commissioner for home affairs, said there had been numerous reports of asylum-seekers being pushed back by Greece.

"Pushbacks are against EU law. We cannot protect our European borders by violating our values," she said.

"I request that Greek authorities track down all illegal activities and carry out necessary investigations. Everyone may not be granted asylum, but we must treat everyone in accordance with our values," she added.

According to Britain's The Guardian and Dutch website De Correspondent, FRONTEX is no mere spectator to Greek pushbacks but actively helps these illegal activities.

Jens Moller, a Danish staffer with FRONTEX's Operation Poseidon in the Aegean, confirmed the media claims.

On Danish radio, Moller related an incident in which they told Operation Poseidon's headquarters they had found 33 asylum-seekers seeking to reach Greece's coast.

He said Poseidon officials ordered them to "put the refugees back in the rubber boat and push them out of the Greek waters."

They refused the order, said Moller, as it would have endangered their lives.

He said after much resistance, the order was revoked and the asylum-seekers were taken to Greece.

Chris Borowski, a FRONTEX spokesperson, told AA that FRONTEX officers are obliged to report human rights violations that they encounter in the field, but they have not gotten any such reports.

"We reject all claims that FRONTEX is involved in pushbacks. FRONTEX resolutely remains committed to implementing border control in the highest standards," he said.

"Our operations and officers have never been involved in pushbacks that are illegal according to international law," he added.