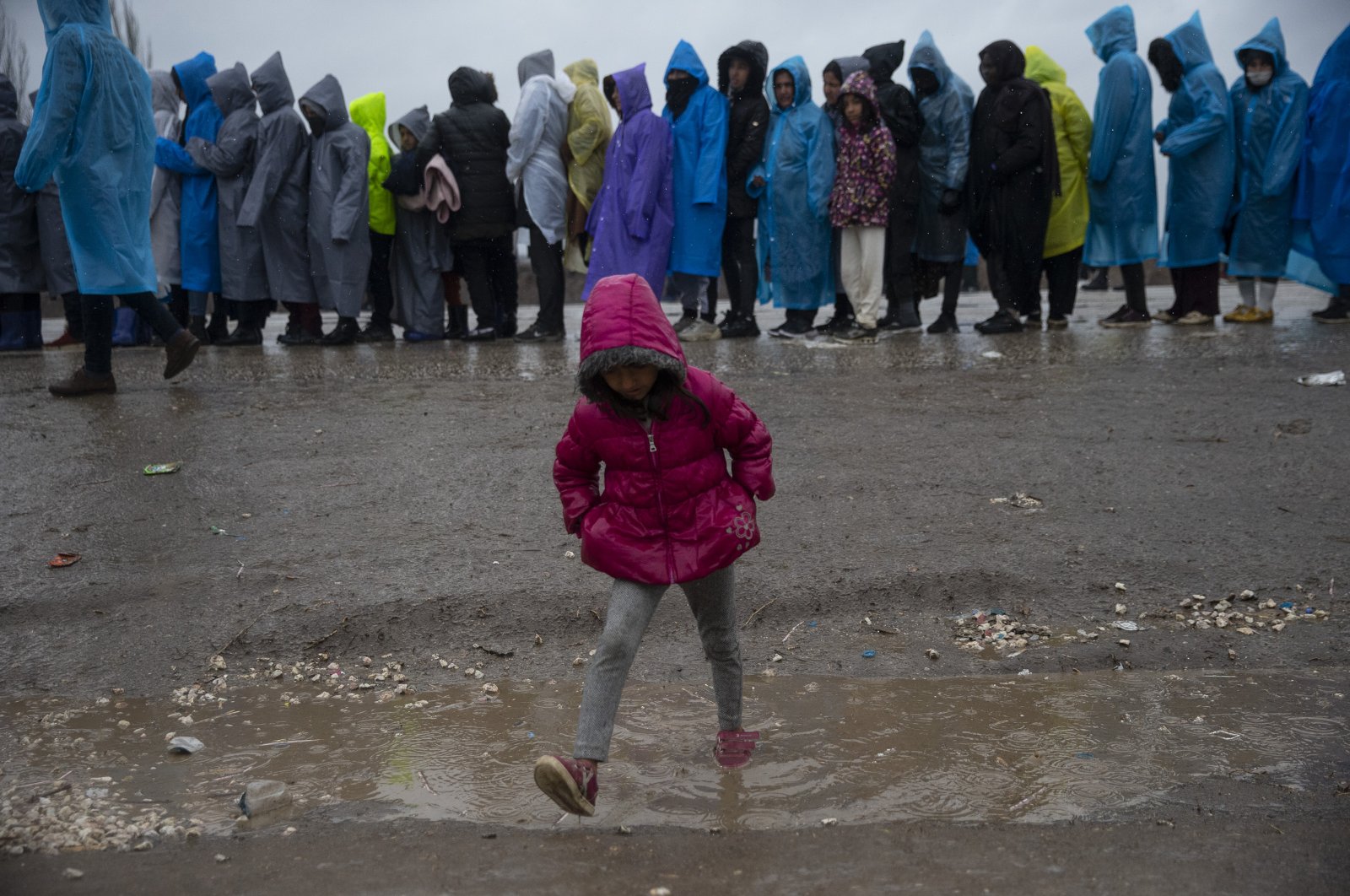 A child walks in the mud as asylum-seekers continue to wait at the Turkish-Greek border despite harsh weather conditions, March 15, 2020 (AA Photo)
by DAILY SABAH Mar 17, 2020 1:21 pm
Edited By Şeyma Nazlı Gürbüz

Desperate asylum-seekers, refugees and migrants have been waiting for 19 days at the Turkish-Greek border while the EU still does not have a concrete solution to the crisis at its border and continues to ignore human rights abuses

The European Union ignores Greek security forces’ human rights violations toward asylum-seekers and refugees at the Turkish-Greek border instead of helping or relocating them to safe areas, the Human Rights Watch (HRW) stated Tuesday.

“The European Union is hiding behind a shield of Greek security force abuse instead of helping Greece protect asylum-seekers and relocate them safely throughout the EU,” Nadia Hardman, refugee rights researcher and advocate at HRW wrote in an article published on the nongovernmental organization's website Tuesday. “The EU should protect people in need rather than support forces who beat, rob, strip and dump asylum-seekers and migrants back across the river,” Hardman added.

Ankara recently announced that it would no longer try to stop asylum-seekers, refugees and migrants from crossing into Europe. Thousands have since flocked to Turkey's Edirne province – which borders Greece and Bulgaria – to make their way into Europe.

The Greek reaction has been harsh, including attacking, tear-gassing and killing several people who attempted to cross to Greece from Turkey.

Turkey harshly criticized the abuse and said the EU seems to have lost its basic values of human rights. Ankara also condemned Greece’s decision to block any new asylum applications for one month, a move at odds with European law and the Geneva Convention. While the U.N. agency for refugees had said the Greek decision has no legal basis, the EU commission said last week it needs time to assess the situation.

“Greek security forces and unidentified armed men at the Greece-Turkey land border have detained, assaulted, sexually assaulted, robbed, and stripped asylum-seekers and migrants, then forced them back to Turkey,” the HRW underlined, “Top EU officials have praised Greece’s border control measures and provided support through the European Border and Coast Guard Agency (FRONTEX).”

The NGO urged Greece to immediately reverse its March 1 decision to suspend for one month access to asylum for people irregularly entering the country and to deport them, where possible, to their countries of origin or transit. “The Greek Parliament should investigate, and FRONTEX should monitor, any Greek security force abuse and summary deportation of asylum-seekers and migrants. EU member states should urgently relocate asylum seekers from Greece to other EU countries and fairly process their asylum claims,” it continued.

Turkey’s decision to open the borders came after the international community remained silent in the face of the Bashar Assad regime’s assaults on civilians and civilian settlements. Turkey had frequently voiced that the surge in violence would cause another major refugee wave, which later came true as the Russian-backed regime displaced around 1 million people from northwestern Syria’s Idlib province. Criticizing the lack of international support on sharing the burden, Turkey stated it would not be able to absorb yet another refugee wave, as it already hosts 3.7 million refugees, more than any other country in the world.

“Without EU pressure on Greece to stop these appalling abuses, this cycle of violence will continue,” Hardman said, adding that “the EU should also help Greece by relocating asylum-seekers to the rest of the EU and help Turkey, the world’s No. 1 refugee-hosting country, by resettling far greater numbers of refugees.”

The HRW explained that it interviewed a large number of people at the border after asylum-seekers started to flood to the border to be taken in by Europe. Accordingly, in most cases, the interviewees said armed men stripped them down to their underwear, including some women, and forced them across the Evros river back to Turkey. “Many said that they were passed between various groups, suggesting coordination between police or soldiers and the unidentified men,” the HRW statement added.

The organization also interviewed five Turkish residents of border villages who described how between Feb. 28 and March 6 they had helped care for large groups of people who returned injured and almost naked from Greece, saying that Greek security forces had beaten, robbed, stripped and deported them.

“All those interviewed said that within hours after they crossed in boats or waded through the river, armed men wearing various law enforcement uniforms or in civilian clothes, including all in black with balaclavas, intercepted everyone in their group,” the watch said. Reportedly, all said the men detained them in official or informal detention centers, or on the roadside, and stole their money, mobile phones and bags before summarily pushing them back to Turkey. Seventeen described how the men assaulted them and others, including women and children, through electric shocks, beating with wooden or metal rods, the prolonged beating of the soles of feet, punching, kicking and stomping.

Turkey, on the other side, decided last week to prevent irregular migrants from trying to cross the Aegean Sea due to safety concerns for the migrants, the Coast Guard Command said. The coast guard also slammed their Greek counterparts for leaving migrants at sea helpless by pushing them back into Turkish waters, damaging their boat engines and sinking rubber dinghies.

Meanwhile, since Feb. 27, some 147,132 asylum-seekers have crossed to Greece through two control points in Edirne, Turkey's western border, and transits are still underway, according to an official statement of the Edirne Governorate Tuesday.

"Three asylum-seekers have died, 214 have been wounded in Greek security forces' attacks with gas and blast bombs, rubber bullets and live ammunition on asylum-seekers. Two hundred six have recovered and discharged from hospitals after treatment, while eight of them are still under treatment. During this period, 7,096 asylum-seekers have been hospitalized due to various reasons and received medical care,” the statement said.

Families of three people who died and one of the wounded have applied to the European Court of Human Rights, while another 25 wounded asylum-seekers are in the legal application process, closely followed by the Union of Turkish Bar Associations, it added.

More than 10,000 asylum seekers spend their nights in tents, struggling under harsh conditions as the weather gets colder.

Asylum-seekers at the Turkish-Greek border on Monday staged a protest to push Athens to allow safe passage into European territory. While they continue to wait in Edirne, asylum-seekers carried signs saying, "We are human" and "We need help" near Greece's Kastanies border gate.

In the two weeks since asylum-seekers were able to reach the border, nearly 2,500 have been wounded by Greek border guards using disproportionate force and violence.