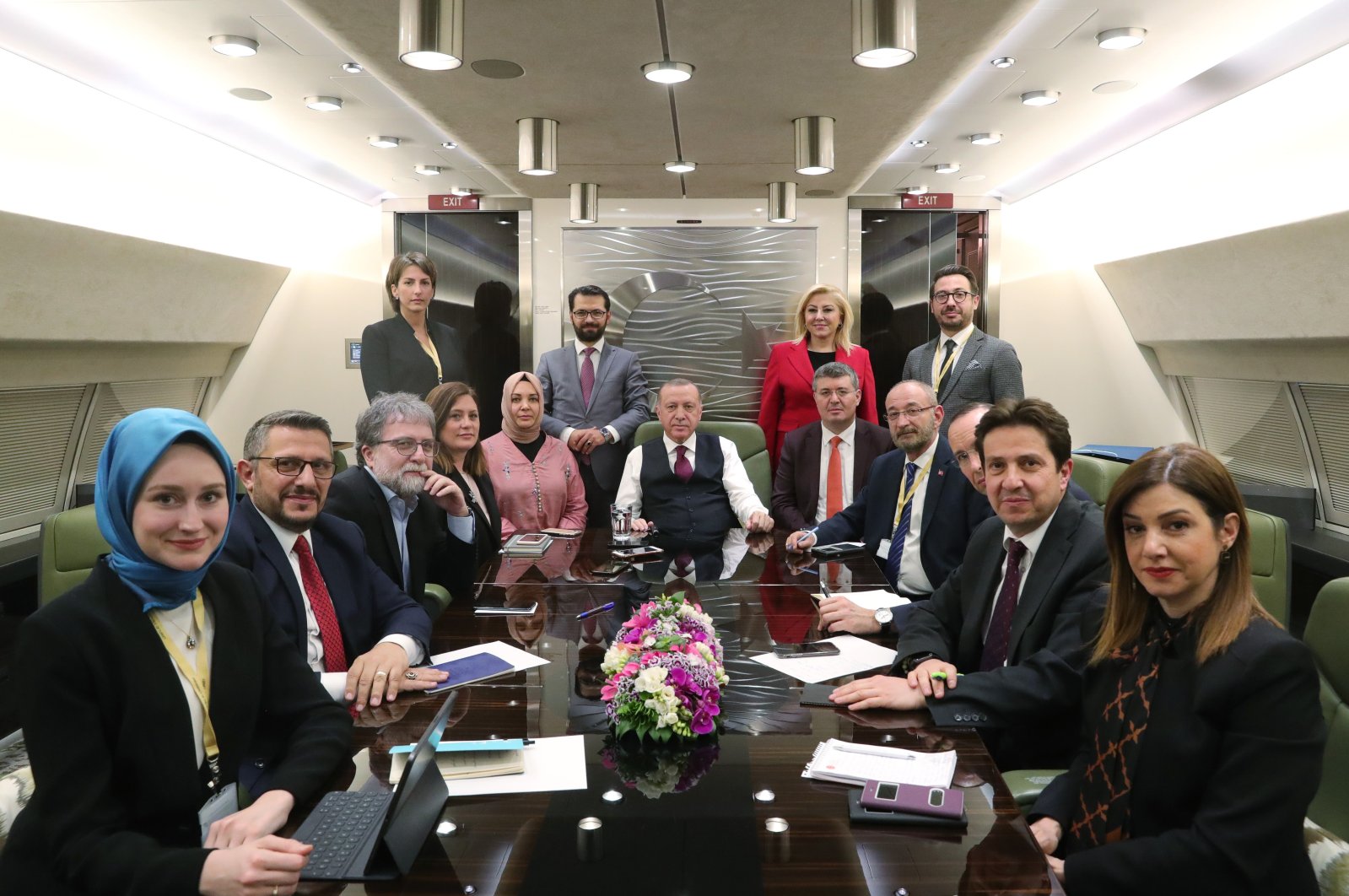 In the face of Turkey's efforts regarding the resolution of the crisis in Idlib and the massive refugee flow, Ankara expects further support from both the EU and NATO while highlighting that it has met all obligations on its part

The European Union and NATO have to support the protection of civilians and the establishment of a cease-fire in war-torn Syria’s northwestern Idlib province, President Recep Tayyip Erdoğan said Monday, adding that letting people trying to reach Europe wait at the Turkish-Greek border and subjecting them to ill treatment was not sustainable.

Speaking to journalists on his way back from Brussels where the president met with high-level representatives of the EU and NATO on Monday, Erdoğan stated: “The EU has to see the bigger picture. The Idlib and refugee crisis is a test of leadership and will matter for the EU more than for us. In a time when we have taken civilians under protection in Idlib and have established a cease-fire giving heavy losses, the EU has to do its part.” The president further added that the application of the cease-fire and finding a permanent solution to the refugee crisis is in everyone’s best interest. “As a result, it is possible that a new process can be started with the EU,” Erdoğan said.

Turkey has launched intense diplomatic efforts following the developments in Idlib, and the refugee crisis reached a new level, with the Bashar Assad regime advancing to gain territory and several Turkish soldiers killed who were stationed in Idlib to protect civilians. As the recent surge in violence caused a renewed refugee wave of nearly 1 million people, Turkey decided to open its borders to those that want to cross to Europe. Following a phone call with European Council President Charles Michel and a visit from Bulgarian Prime Minister Boyko Borisov, Erdoğan last week visited Moscow to hold talks on the recent developments in Syria with his Russian counterpart Vladimir Putin, and they agreed to establish a new cease-fire in the region.

Saying that Turkey-EU relations were discussed comprehensively during the visit, Erdoğan said: “EU leaders acknowledged that Turkey has fulfilled its obligations within the scope of the March 18 agreement and that the EU has been acting slowly. Joint efforts will be made and political and technical teams will set up a road map to accelerate the process. Foreign Minister Mevlüt Çavuşoğlu and EU foreign policy chief Josep Borrell will head this process. We expect the first outcomes of this joint work to come out before the March 26 EU leaders’ summit.” To make that possible, the president said, the EU has to act fast, and Turkey expects the support of all EU countries in this regard.

The main topics discussed were the updating of the March 18 agreement and the customs union, a solution to the Schengen issue, the revival of negotiations, opening of new chapters and the fast transfer of the promised 3 billion-plus-3 billion euros for refugees and additional funds, the president elaborated, saying that visa exemption was even applied for Latin American countries, the Balkans and Ukraine but not Turkey.

“From energy, the fight against terrorism to migration, the refugee crisis and security, we need cooperation and solidarity in every field. If we act accordingly, both Turkey and the EU will be stronger and more secure,” Erdoğan added, indicating that the lack of efficiency in the use of dialogue channels is one of the main problems between the EU and Turkey.

Highlighting that Turkey is a country that has been waiting at the EU’s doorstep since its application for membership in 1963, the president mentioned that in his term as prime minister, Former German Chancellor Gerhard Schröder and former French President Jacques Chirac used to attend the EU leaders’ summit.

Turkey and the EU signed an agreement on March 18, 2016, to stem the influx of refugees to Europe. Turkey has been the main route for refugees trying to cross into Europe since the beginning of the civil war in Syria. With the agreement, irregular immigration decreased by 99%, saving the lives of many who would have otherwise attempted the journey by sea.

According to the deal, Turkey was promised a total of 6 billion euros ($6.8 million) in financial aid, which was initially designed to be given to the country in two stages, to be used by the Turkish government to finance projects for Syrian refugees. Visa freedom for Turkish citizens was also promised to be provided under the agreement. Lastly, the customs union was to be updated in accordance with the deal.

Turkey will call Greece to account for its maltreatment of innocent refugees and will expose its actions during the U.N. General Assembly this year, the president said.

“Greece is not aware of international law; (Greek Prime Minister Kyriakos) Mitsotakis needs to look at the universal declaration of human rights. They need to know and accept that their treatment at the border is murderous. We will expose again the pictures of refugees stripped of their clothes this year at the U.N. General Assembly,” Erdoğan said, pointing out that Greek security forces trying to hinder migrants from crossing the border recently have killed four or five people.

The president stated that in the face of the Greek demand to keep the Turkish border shut, Turkey told them that it does not consider closing it. “Greece should open its borders and let refugees go to other countries. Yet, they cannot voice this, which results in Turkey carrying all the burden. We want a fair, humanitarian and equal share of burden,” he continued.

Thousands of refugees and other migrants have been trying to get into Greece across the country’s eastern land and sea borders over the past week after Turkey declared its previously guarded borders with Europe would be opened.

Turkey has discussed with NATO Secretary-General Jens Stoltenberg the national security threats Turkey faces and how it can further the cooperation between Ankara and NATO, the president said. “We called an emergency meeting of the NATO council on Feb. 28 and voiced our demands," Erdoğan said.

When asked about Turkey’s S-400 missile defense system purchase, the president said that Stoltenberg’s view on the issue was clear and that he voiced that every member has the right to choose while NATO cannot put pressure on any country regarding the issue.

“The U.S. has softened on the issue of the S-400. We told them that we would buy Patriots if they are ready to give them. The Patriots of Spain, currently in our hands, is the package NATO has assigned for us. Yet, an additional package was not mentioned,” Erdoğan said.

Speaking of the situation on the ground in northwestern Syria after the announcement of the cease-fire with Russia, Erdoğan said that the process was going well since the truce started four days ago. “I hope it will continue like this, and the cease-fire will become permanent. We expect a positive outcome from the NATO meeting on March 11,” Erdoğan said.

The president also mentioned that efforts to build briquette houses for displaced people were continuing 25-20 kilometers into northern Syria in the projected safe zone, noting that 1,500 houses were ready. “We will settle the people of Idlib here. Together with this, the return of displaced people to Idlib has started following the cease-fire,” he added, noting that joint patrols with the Russians will start on March 15.

The cease-fire was reached in Moscow last week after talks to contain the escalating conflict. The meeting came after regime forces attacked Turkish soldiers and civilians on the ground, causing Turkey to launch a renewed operation in Syria.

Turkey launched Operation Spring Shield on Feb. 27 after at least 34 Turkish soldiers were killed last month in an Assad regime airstrike in Idlib province and after repeated violations of previous truces.

Turkey and Russia could use the oil reserves in Syria’s Qamishli and Deir el-Zour to rebuild war-torn Syria with the help of financial support from Moscow, the president stated. The president said Putin did not respond negatively to this idea and that a similar proposal could be made to U.S. President Donald Trump.

“Terrorists are exploiting the oil reserves. The oil they drill out is not processed oil; it has no quality, but if it is taken and processed, we would have a chance of reconstructing Syria. This would reveal who wants to preserve the unity and integrity of Syria and who wants to take control of it,” Erdoğan stated.