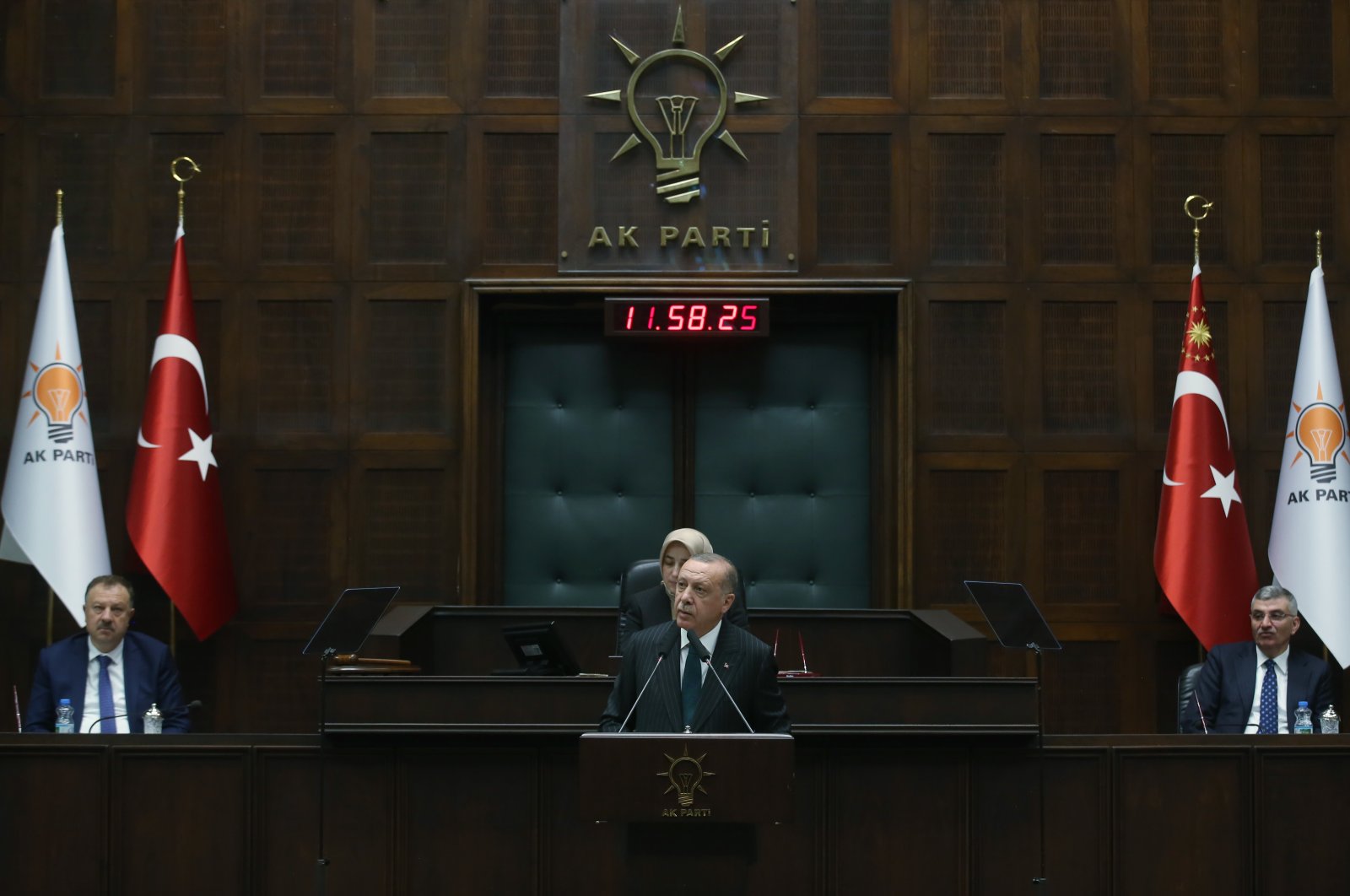 President Recep Tayyip Erdoğan said European countries need to support Turkey’s policy in northwestern Syria if they genuinely want to solve the migrant crisis, as he urged the bloc to act in line with the Universal Declaration of Human Rights regarding the ongoing humanitarian crisis in northwestern Syria’s Idlib province and Greek authorities push migrants approaching their borders.

“If European countries want to solve the problem, then they need to support the political and humanitarian solutions proposed by Turkey in Syria,” Erdoğan told a parliamentary group meeting of the ruling Justice and Development Party (AK Party) on Wednesday.

He criticized Greek authorities for their inhumane treatment of migrants arriving at their borders, as over 130,000 have crossed to Europe after Turkey announced it would no longer lock down their border.

“Our Greek neighbors, who try all means to bar migrants like drowning them at sea or even shooting them to death, should not forget that one day they might need the same mercy,” Erdoğan said and added that he invites all European countries, including Greece, to respect asylum seekers arriving in their countries as per international human rights law.

Turkish officials have been criticizing the EU for failing to honor a 2016 migrant pact and Greek authorities for their brutal treatment of migrants, including women and children.

The president emphasized the necessity of establishing a political system, including a new constitution in Syria based on unity and territorial integrity of the country, as well as free elections and a democratic administration.

Attacks by the forces of the Bashar Assad regime have killed 55 Turkish soldiers in the past month in Idlib, and Turkey launched Operation Spring Shield after a deadline for regime troops to retreat behind Turkish observation posts expired on Feb. 28.

Regime airstrikes targeting Turkish troops also heightened tensions between pro-opposition Turkey and Assad and its ally, Russia. The latest crisis stems from a Russian-backed Assad regime military campaign to retake Idlib province, which is the last opposition-held stronghold in Syria.

The offensive, which began Dec. 1, has triggered the largest single wave of displacement in Syria's nine-year war, sending nearly a million people fleeing to areas near the Turkish border for safety.

Erdoğan will travel to Moscow on Thursday to hold a meeting with Russian President Vladimir Putin to discuss the situation in Idlib, where the Syrian regime and its allies have consistently broken the terms of the agreement, launching frequent attacks inside the territory where acts of aggression are expressly prohibited. Kremlin also recently announced that a trilateral summit may be held between the Turkish, Russian and Iranian leaders, although they did not specify a date for the meeting.

Turkey has been telling European and other countries that it would not be able to handle another wave of migrants as it already hosts over 3.7 million, and officials have been criticizing them for remaining indifferent to the calls and the dire humanitarian situation in northwestern Syria. European countries have mobilized to take action after Turkey opened its borders last week.

Lastly, the customs union was also to be updated in accordance with the deal. In exchange for these promises from the EU, Turkey took the responsibility of discouraging irregular migration through the Aegean Sea by taking stricter measures against human traffickers and improving the conditions of more than 3 million Syrians living in Turkey.

Erdoğan also warned European countries about the rising threat of fascism, noting that another migrant influx may be “a real disaster” because past examples have shown that European societies tend to attack each other during such crises.

“We just hope that the recent developments lead the EU to see the truth and give the necessary support to our country,” he added.

He warned the regime that it’s oppressive policies will not last as Syrians in other parts of the country might start opposing his rule soon.

“Soon the Bashar Assad regime will find Syrian people in other parts of the country beside Idlib standing up to it. The regime will only then realize that the air and military support it receives from other countries cannot save it,” Erdoğan said, in reference to Russian and Iranian support for the regime.

The president continued by saying that the regime is trying to carry out a massacre in Idlib like it did in Daraa, Hama, Homs and Aleppo, but noted that it would not be able to succeed this time because Turkey is on the ground to protect innocent civilians and itself.

Erdoğan also touched upon the surge of PKK/YPG attacks in other parts of northern Syria, saying that these prove that the terrorists would continue to directly target Turkey if Turkish troops withdraw from the safe-zone areas in Syria.

On Monday, the Turkish military announced that it neutralized 32 PKK/YPG terrorists attempting to infiltrate south of the Operation Peace Spring area.

As part of two separate deals with the U.S. and Russia, Turkey paused the operation to allow the withdrawal of YPG/PKK terrorists from the planned northern Syria safe zone.

The deal with Moscow, reached on Oct. 22, specified that security forces from Turkey and Russia would mount joint patrols in the area within 30 kilometers south of Turkey's border.​​​​​​