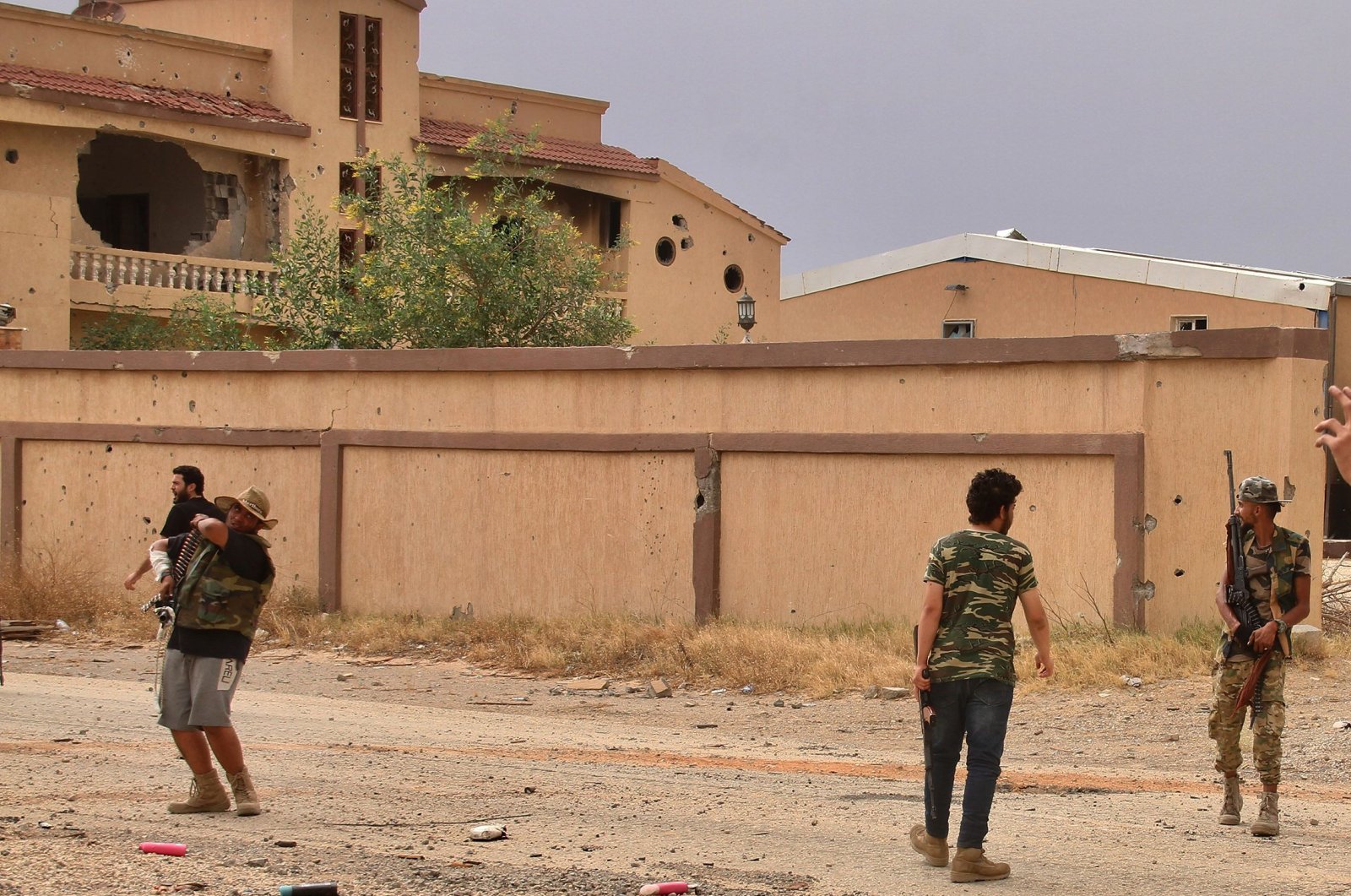 Fighters loyal to the internationally recognised Libyan Government of National Accord (GNA) are pictured during clashes with forces loyal to Khalifa Haftar in an area south of the Libyan capital Tripoli on June 1, 2020. (AFP Photo)
by French Press Agency - AFP Jun 03, 2020 11:33 am
RECOMMENDED

The European Union on Tuesday tried to reassure Russia after a French warship intercepted an oil tanker off the coast of Libya during an operation to halt the flow of arms to the North African country.

EU representatives spent the closed-door U.N. Security Conference video call – arranged at Russia's behest – explaining the bloc's naval mission to enforce an arms embargo on Libya, which began April 1, according to diplomats who spoke on condition of anonymity.

The bloc reiterated the "commitment of European states to respect (arms and oil) embargoes ... within the strict rules of Security Council resolutions," one diplomat said.

According to another diplomat, Russia is one of the only Security Council members to have raised concerns about renewing authorization for Operation Irini's high seas inspection mission when it expires on June 10.

A vote on the Berlin-penned reauthorization text is scheduled for June 9.

Moscow denies claims it is providing arms and mercenary troops to Libyan putschist Gen. Khalifa Haftar, who has been waging an offensive since April 2019 to seize the capital Tripoli from the legitimate government.

The Russian mission stressed the need for Irini to be in compliance with the resolution authorizing it, calling for any renewal to be "unbiased" and to "prevent any imbalances."

"We will thoroughly study how the operation evolves and see if its modalities are subject to a new Security Council mandate," they said.

"Irini is covered by the existing resolution and we are looking at a rollover," German U.N. Ambassador Christoph Heusgen said of what he called a "very important" part of keeping arms out of Libya.

"We believe this new operation is just a successor of the previous one," said French U.N. Ambassador Nicolas de Riviere, comparing Irini to the EU refugee naval mission Sophia.

"It operates under the exact same mandate," he said.

Diplomats said the interception of an oil tanker by the French ship off the coast of Tobruk 10 days ago was a major topic of conversation during Tuesday's session.

The Gabon-flagged Jal Laxmi was collecting a multimillion-dollar oil shipment but had not received authorization from the Tripoli-based Libyan National Oil Corporation, a specialist told Agence France-Presse (AFP) on the condition of anonymity.

The ship ultimately did not dock in Tobruk after the vessel's owner and insurer became wary of potential sanctions, the specialist said.

"The U.N. welcomes France's actions and indeed all efforts to uphold the U.N. oil embargo," the U.N. said about France's involvement last week.

According to one diplomat, intercepting illegal oil shipments is a lower priority for the Irini mission than controlling illegal arms, for which European ships have carried out around 50 checks on other ships off the coast of Libya since early April.

"There have been multiple and concerted efforts on the part of the U.N. member states and the U.N. Panel of Experts to contact all companies and countries involved in this current affair regarding the Jal Laxmi to caution all involved against proceeding," U.N. deputy spokesman Farhan Haq said, reiterating that only the Libyan National Oil Corporation could buy or sell oil in the country.

The French foreign ministry only said the warship had "interacted" with the oil tanker.