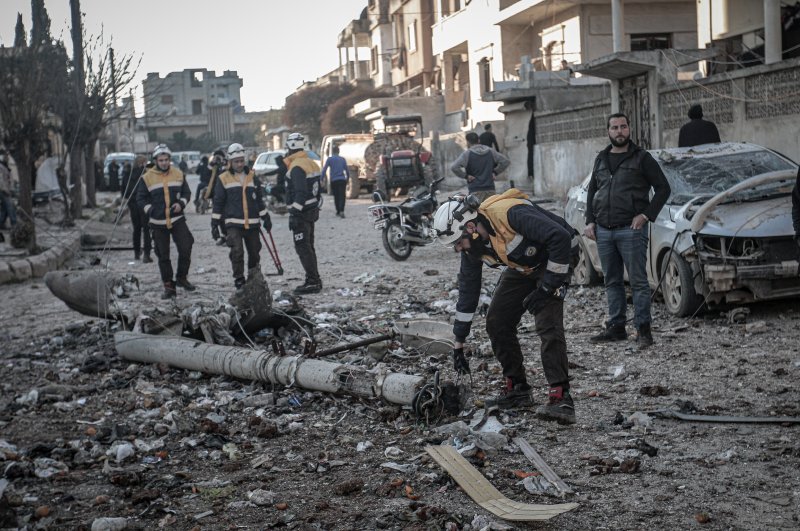 Around 20 civilians have lost their lives in airstrikes conducted by the Assad regime and Russia in Syria's Idlib de-escalation zone, Feb. 25, 2020. (AA Photo)
by Daily Sabah with DPA Feb 26, 2020 1:09 pm
Edited By Dilara Aslan
RECOMMENDED

The foreign ministers of 14 EU countries called Wednesday for a halt to the fighting in Syria's northwestern Idlib province in a joint contribution to German news portal T-Online.

"We call on the Syrian regime and its backers to halt this offensive and once more to observe the cease-fire agreement made in the autumn of 2018," the ministers wrote.

"We also call on them to end combat operations without delay and to comply with their obligations under humanitarian international law," they continued, adding that this included the protection of humanitarian aid workers and medical personnel, many of whom had lost their lives while working to assist the civilian population in Idlib.

In their joint op-ed, the officials also voiced support for talks between Ankara and Moscow for a solution to the current crisis.

"We also call on Russia to continue negotiations with Turkey to defuse the terrible situation in Idlib and to contribute to a peaceful solution," the foreign ministers said, a day before Russian and Turkish delegations are expected to hold talks in Ankara.

The ministers also underlined their commitment to support efforts for fighting terrorist groups in northwestern Syria.

The latest assault of the Assad regime and Russia has displaced at least 900,000 people in northwestern Syria’s Idlib, according to U.N. figures, constituting the biggest one-time displacement since the start of the war. Idlib is the last opposition stronghold still trying to resist the attacks of the Assad regime to seize control of the province. The northwestern provinces have been particularly on Assad’s radar as the strategic M4 and M5 highways cross through the region.

Several countries and the U.N. have made urgent calls for a cease-fire in Idlib, where the current humanitarian emergency has been described as the worst since the start of the conflict.

It has been months now since regime forces sped up attacks on Idlib, the last opposition stronghold in the war-torn country, targeting innocent civilians under the pretext of fighting terrorists. However, the regime is not alone in its attacks, ongoing since April 2019. As its backer, Russia is often active on the ground, aggravating the humanitarian crisis.