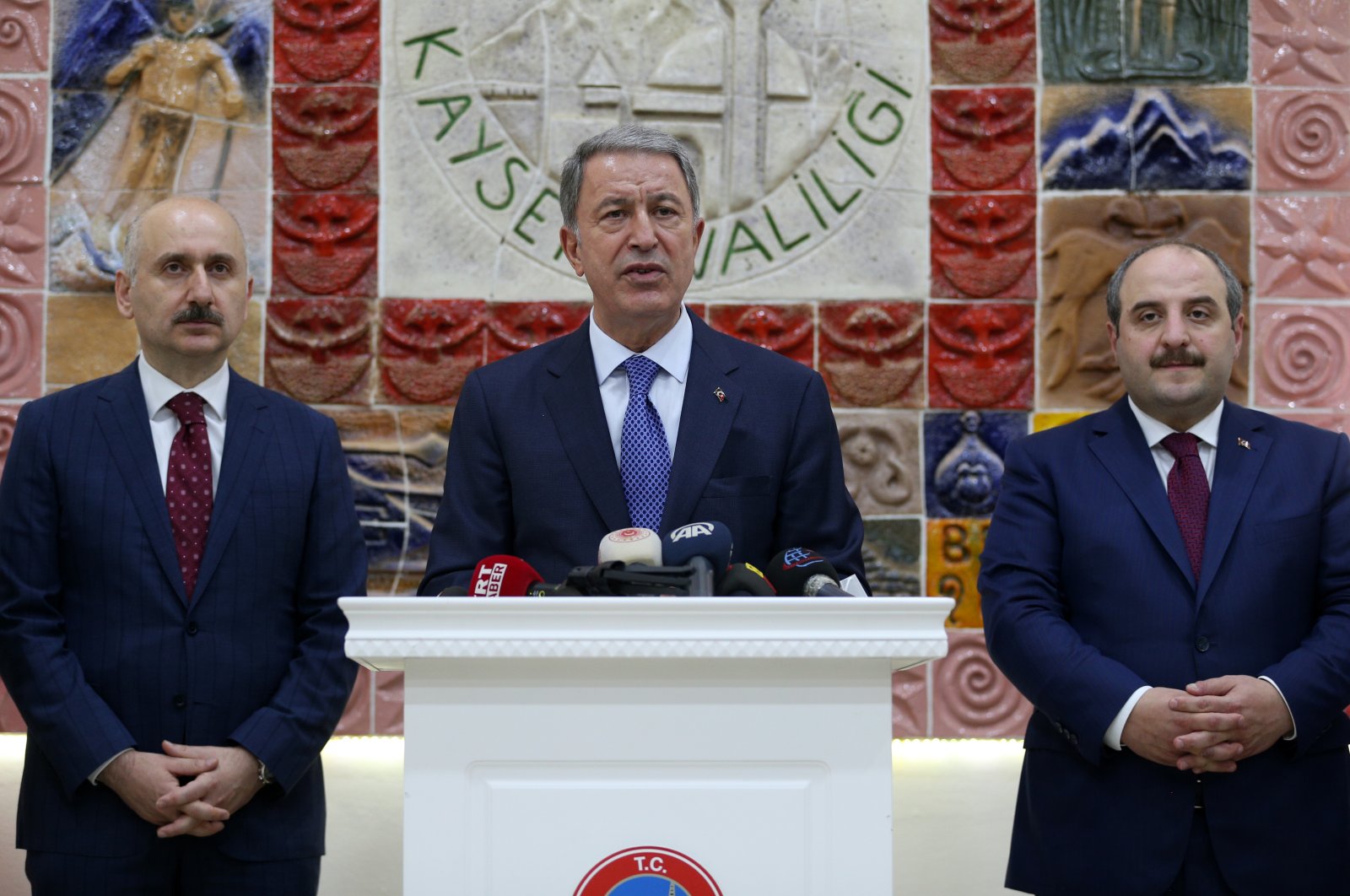 Turkey has proven through video footage and radar images that its ships have not engaged in any illegal activity in the Mediterranean Sea, Defense Minister Hulusi Akar said Thursday amid allegations that its navy had harassed a French warship.

Speaking at a ceremony in Kayseri province, Akar said Turkey shared all of the evidence with NATO's military and civil authorities.

A French official claimed Wednesday that the Turkish navy had harassed one of France's warships taking part in a NATO mission in the Mediterranean.

Already strained ties between NATO allies France and Turkey have worsened in recent days as the two sides exchanged accusations over the Libya conflict and activities in the Eastern Mediterranean.

Earlier this week, French President Emmanuel Macron launched a furious attack on Turkey's role in Libya, accusing it of playing a "dangerous game" that can no longer be tolerated.

In response, Turkey has accused Paris of itself "playing a dangerous game in Libya" by supporting putschist Gen. Khalifa Haftar in his campaign against the U.N.-recognized legitimate government. Ankara also said that France aimed to divide Libya in the hope of restoring its colonial past.

Ankara supports the internationally recognized Government of National Accord (GNA) in the conflict against Haftar.

France is suspected by analysts of backing Haftar alongside Egypt, Russia and the United Arab Emirates (UAE) but insists it is neutral in the conflict.

On his country's presence in Libya, Akar said Turkey is there at the invitation of the president of the U.N.-recognized and legitimate Libyan government, Fayez Sarraj, to Turkish President Recep Tayyip Erdoğan.

"We provide military training and consultancy services to the Libyan government's armed forces which conduct operations on the ground. Our presence in Libya is completely legitimate," he added.

Akar noted that the silence of some countries that back eastern Libya-based warlord Haftar -- who is committing crimes against humanity in the country -- has drawn attention.

He said some countries have also been making false statements against Turkey after realizing the impracticability of their own ambitions.

Akar also said the National Armed Forces continue their activities day and night to protect the rights and interests of Turkey in the Aegean Sea, Eastern Mediterranean and Cyprus.

"Cyprus is our national cause. It has to be kept in mind that Turkey will not allow a fait accompli," he said.

Akar reiterated that any proposed solution that does not include Turkey will be futile and cannot be realized.

He said although Turkey has repeatedly highlighted that it respects agreements and attaches importance to good neighborly relations and international law, some countries have distorted those statements.

"They continue to pursue goals in their way that are impossible to be realized," he added.

The Cyprus problem has remained unresolved for decades, despite a series of efforts by the United Nations, while recent tensions in the Eastern Mediterranean have further complicated the problem.

The island has been divided into a Turkish Cypriot government in the north and Greek Cypriot administration in the south since a 1974 military coup aimed at Cyprus' annexation by Greece.

Turkey's military intervention as a guarantor power in 1974 had stopped years-long persecution and violence against Turkish Cypriots by ultra-nationalist Greek Cypriots.

Turning to Turkey's fight against terrorism, Akar said operations are picking up pace both at home and abroad.

"In Operation Claw-Tiger, Turkish soldiers are making maximum efforts despite challenging conditions. They did what they had to do and continue to do so. Our only purpose there is to fight against terrorism and terrorists and to ensure the security of our borders and people," he said.

Turkey's joint Claw-Tiger and Claw-Eagle operations were launched this month to ensure the safety of the Turkish people and the country's borders by neutralizing the threat from the PKK and other terrorist groups, who often use northern Iraq to plan cross-border attacks.

Speaking on the baseless comments made about Turkish soldiers in Syria and northern Iraq which seek to distort the truth on the aim of the cross-border operations, Akar said: "We should not fall for them. The Turkish Armed Forces and Turkey have never and will never target our Kurdish brothers."

"We are brothers and sisters," he said, adding the Turkish and Kurdish people are now working together for the safety and welfare of Turkey.