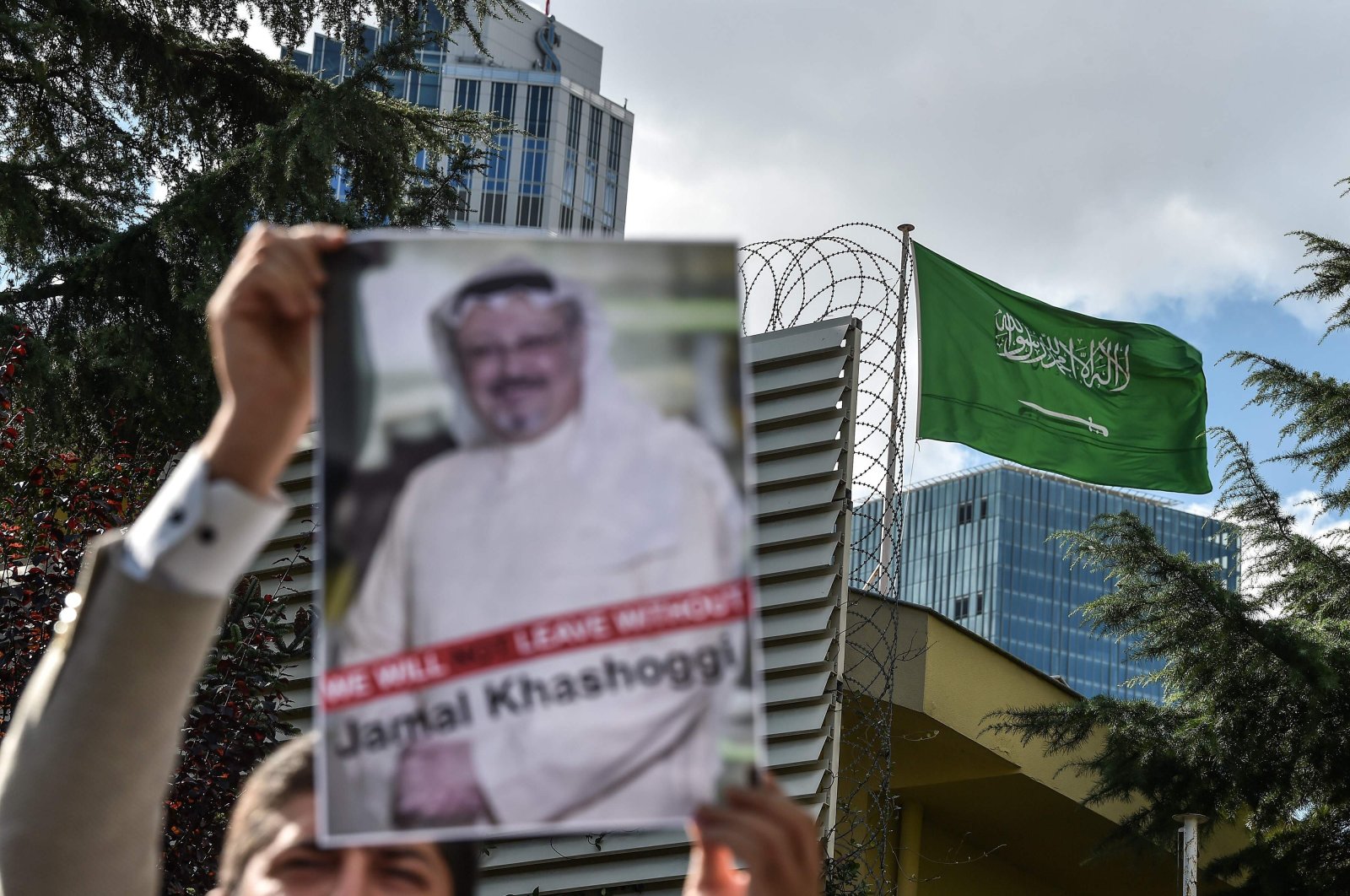 In this file photo taken on Oct. 5, 2018, a protester holds a picture of journalist Jamal Khashoggi in front of the Saudi Consulate in Istanbul (AFP Photo)
by DAILY SABAH Jul 05, 2020 12:08 pm
Edited By Nurbanu Tanrıkulu Kızıl
RECOMMENDED

A former consulate worker who testified as a witness at the trial held in absentia for 20 Saudi nationals indicted in the murder of journalist Jamal Khashoggi said consulate officials wanted him to light the tandoor oven and leave amid a state of panic.

Consulate worker Zeki Demir, who spoke in the first trial held in Istanbul's 11th Criminal Court on Friday, said on the day of the murder, he was told to light the tandoor pit in the consulate premises.

“They wanted me to light the tandoor. They were in a state of panic, and it looked as if they wanted me to leave right away,” Demir told the court. “I realized that the color of the marble pieces around had changed and thought maybe they were washed using chemicals. The marble attachment under the tandoor lid was also broken into pieces.”

Evidence suggested that Khashoggi’s body was cremated in the aforementioned tandoor oven. Turkish officials believe the burning of the body took place over a period of three days. The Saudi assassination squad later cooked bags of meat in the same tandoor oven to cover up the cremation, authorities claimed. In another chilling revelation, Istanbul police said in the 2018 annual report that the Saudi assassination squad had ordered 32 portions of raw meat from a well-known restaurant for the consulate after the murder, strengthening suspicions that they got rid of the journalist's body by burning it. The outdoor furnace in the Saudi consul's yard was built according to his specifications and can withstand temperatures hot enough to melt metal, a worker who constructed the oven told Al-Jazeera.

Meanwhile, U.N. special rapporteur for extrajudicial summary or arbitrary executions, Agnes Callamard, said Turkey has been doing its share in the Khashoggi case.

Praising Turkey’s efforts to hold perpetrators accountable, Callamard said that other countries did not send representatives to the trial and that she expected UNESCO, British and Canadian representatives to attend the hearing in November.

Callamard also thanked the media for their interest in the case. She said the journalists are sending the message to dictators through their medium that they cannot get away with the murder of journalists.

“Thank you for what you’ve been doing for the past two years,” Callamard said.

Khashoggi was killed and dismembered by a group of Saudi operatives in the country's consulate in Istanbul on Oct. 2, 2018. Initially denying and later downplaying the incident as an accidental killing in a fistfight, almost three weeks after the disappearance, Riyadh finally admitted that Khashoggi was murdered in a premeditated action but denied any involvement of the royal family.