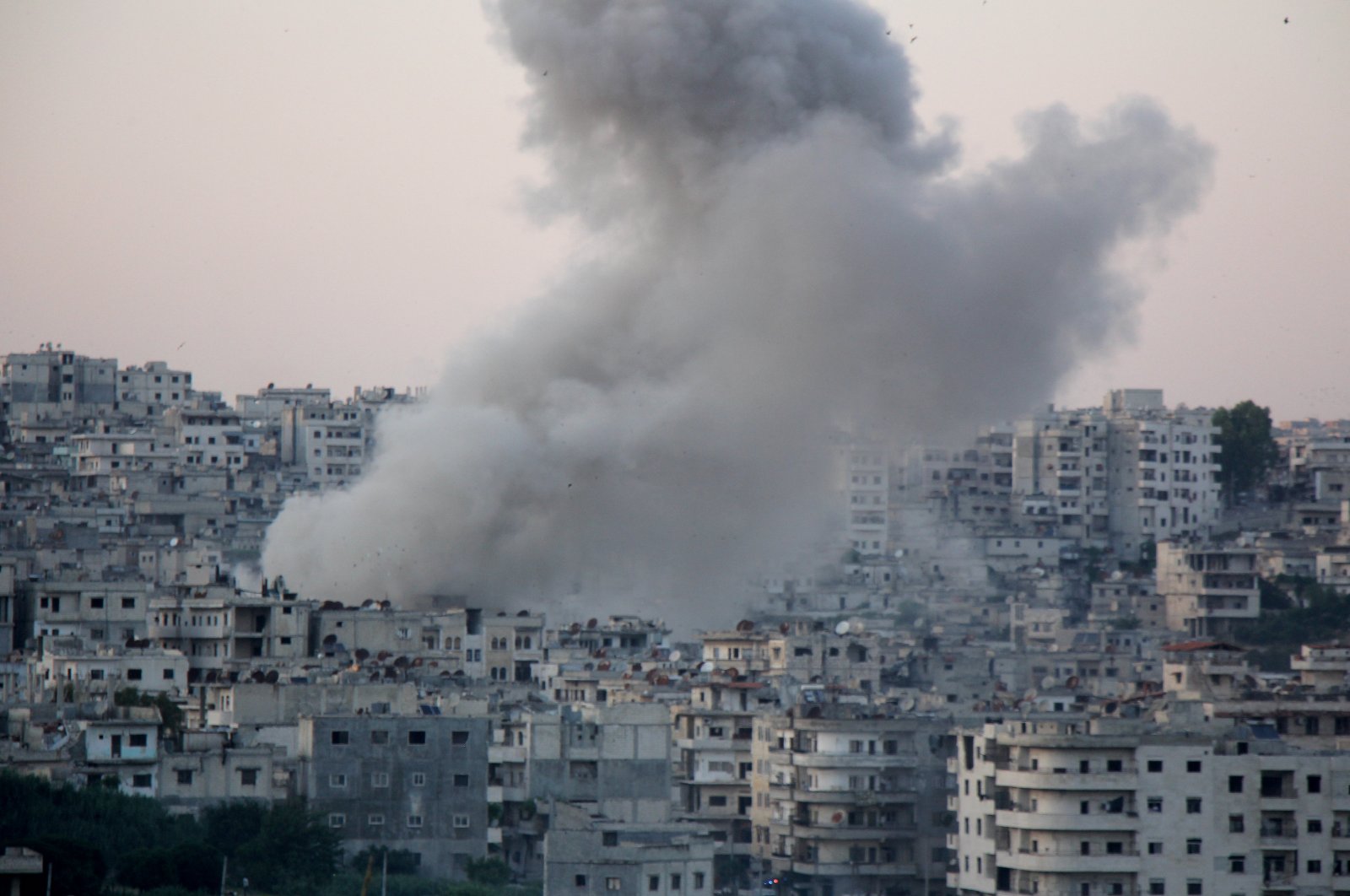 Syria's war has killed more than 380,000 people since it started in 2011 with the repression of anti-regime protests, before evolving into a complex conflict involving world powers and extremist groups. (AA Photo)
by ASSOCIATED PRESS Jul 05, 2020 12:04 pm
RECOMMENDED

Families of those who were detained by the Assad regime during the nine-year-old civil war hope for news amid the sanctions imposed by the United States.

Alaa Arnous and his family found the photo of his father Mohammed online last week, the first proof of his fate since he was seized by Syrian regime forces seven years ago. The image showed his corpse, his face battered and bruised, his mouth hanging open.

The elder Arnous was among thousands of Syrians who, since their country’s civil war began in 2011, went missing into Syrian regime prisons. Survivors and rights groups say thousands more are known to have died under torture.

Anguished relatives are poring over photos of torture victims from Syrian prisons, posted online by activists after the U.S. imposed heavy new sanctions on the Assad regime last month.

"We were living on hope that he was still alive," Alaa Arnous told The Associated Press (AP) from the opposition-held town of al-Tah in northwest Syria as he looked at his father’s photo on his smartphone.

"It is terrible when you see the photograph of your father and imagine what the torturers did to him," he said.

The photo is among tens of thousands of images of torture victims smuggled out of Syria in 2013 by a forensic photographer-turned-whistleblower who used the code name, Caesar. The photos became public at the time, but most were images of piles of bodies, difficult to identify.

But activists have begun circulating more detailed photos again online after the U.S. imposed its new sanctions, named the Caesar Syria Civilian Protection Act, after the photographer. The sanctions bar anyone around the world from doing business with Assad’s regime or officials, and among its provisions, it demands that Syria release detainees and allow inspections of its prisons.

"There were lots of people who died under torture. I used to be blindfolded but could hear a person tortured next to me taking his last breaths before he dies," said Omar Alshogre, a former Syrian detainee speaking from Sweden, where he now lives.

Alshogre was detained at the age of 17 along with three of his cousins, two of whom have died. He paid his way out of jail after three years in prison. Between 30 to 50 prisoners died every day at the facility where he was held, known as Branch 15, he said.

Alshogre, who testified about his ordeal at the Senate Foreign Relations Committee’s hearings on the sanctions in March, said Lebanese and other foreigners – including Iraqis, Palestinians and Tunisians – were also held at Branch 15.

The sanctions have also raised hope in neighboring Lebanon that Damascus will be pressured to reveal the fate of hundreds of Lebanese believed to have been abducted by Syria during the years it dominated Lebanon – from the Lebanese 1975-90 civil war up to 2005. Alshogre’s testimony about Lebanese prisoners still alive further fueled their families’ demands for information.

Ali Aboudehn, who spent years imprisoned in Syria and now heads the Association of Lebanese Prisoners in Syrian Jails, said his group and other activists have documented 622 Lebanese prisoners held in Syria. He said Lebanese authorities requested information about them from the Syrians, who acknowledged a few of them being held on criminal charges and denied any knowledge about others.

According to the Syrian Network for Human Rights, Syrian authorities detained some 1.2 million people since the country’s conflict began in March 2011. Since the beginning of June, 12,325 were documented as having died under torture in Syrian regime prisons, the SNHR said in a report released late last month.

At least 12,989 are still detained or missing, their fates unknown, according to the report. Another 16,000 are missing in detention by other factions in Syria’s war.

In the conflict-ravaged country, most recently, clashes between Russia-backed Syrian regime forces and the Daesh terrorist group have killed more than 50 fighters on both sides in two days, a Britain-based war monitor said Saturday.

Fighting and Russian airstrikes in the central desert province of Homs since late Thursday have claimed the lives of 20 pro-regime fighters and 31 extremists, the Syrian Observatory for Human Rights said.

The Daesh terrorists have retained a roving presence in Syria's vast Badia desert, despite losing their last shred of territory last year. They regularly carry out attacks there.

They declared a cross-border "caliphate" in large parts of Syria and neighboring Iraq in 2014, but several military campaigns against it chipped away at that proto-state and eventually led to its territorial demise.

Syria's war has killed more than 380,000 people since it started in 2011 with the repression of anti-regime protests, before evolving into a complex conflict involving world powers and extremist groups.