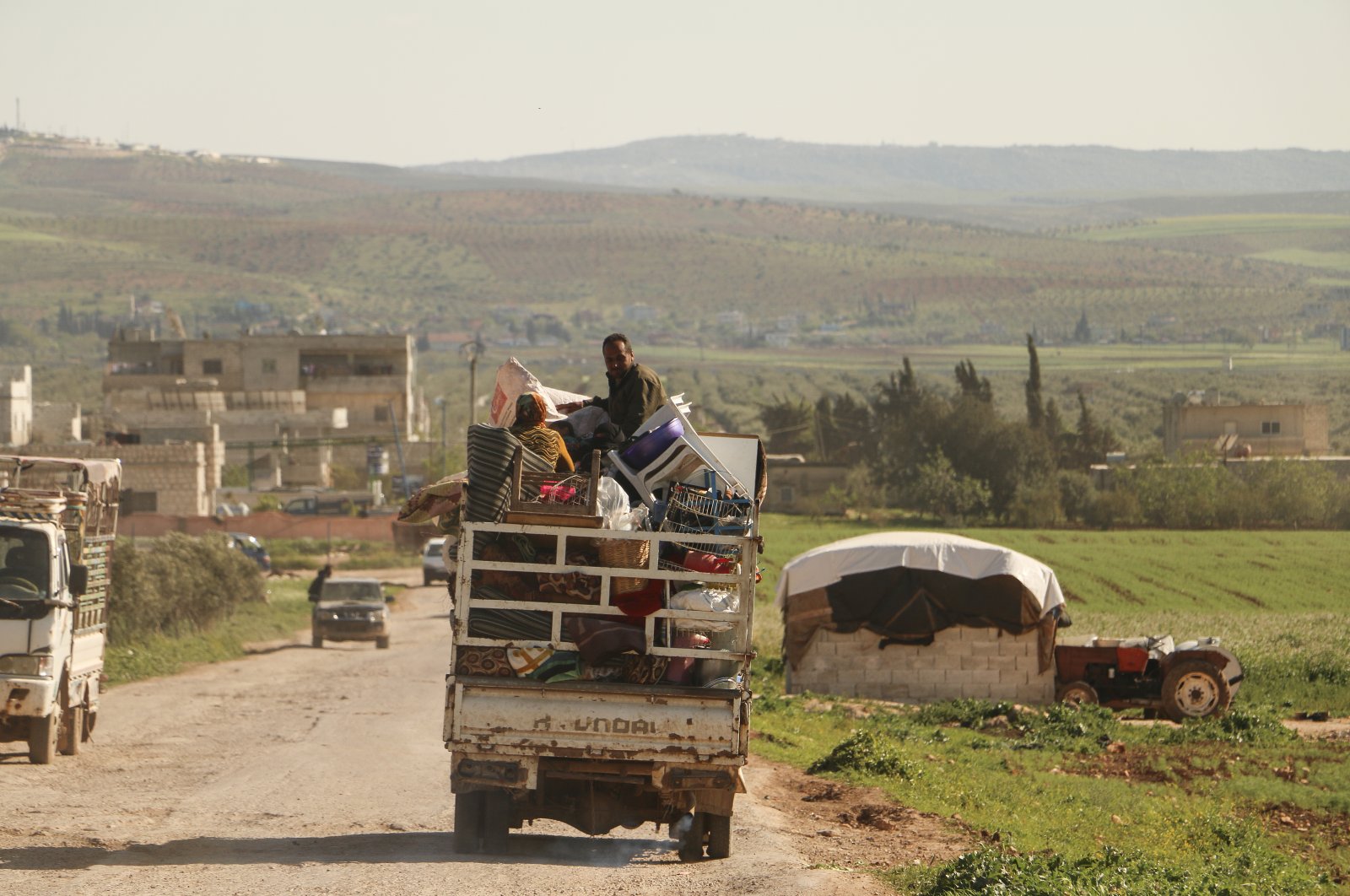 Syrian civilians return to the northwestern province of Idlib, as the coronavirus pandemic threatens the vulnerable region, northern Syria, April 13, 2020. (AA Photo)
by DAILY SABAH WITH AGENCIES Apr 13, 2020 11:09 am
Edited By Dilara Aslan

Faced with the coronavirus threat, thousands of displaced families have chosen to return to Syria's last opposition bastion, Idlib, despite the risk of getting caught in a new regime assault

Thousands of displaced Syrians have started to return to northwestern Idlib province despite the risk of renewed attacks by the Bashar Assad regime and its backers out of fear of the coronavirus pandemic, which could quickly spread in crowded camps, a relief agency said Sunday.

The Syrian Response Coordination Group, a northwest Syria relief agency, said 103,459 Syrians had returned to towns in the Aleppo and Idlib countryside since the cease-fire.

According to the U.N., about 1 million Syrians fled Idlib and its surrounding countryside this past year after Russian-backed regime forces stepped up a campaign to retake the last opposition stronghold after nine years of war.

Fighting has calmed since March when Ankara agreed on a cease-fire with Moscow, which has supported Damascus with heavy airpower. The cease-fire in Idlib was reached in Moscow last month after talks to contain the escalating conflict. The meeting came after regime forces attacked Turkish soldiers and civilians on the ground, causing Turkey to launch a renewed operation in Syria. The cease-fire deal came amid recent clashes between the Turkish military and Syrian regime forces that left many dead on both sides.

"Our lives go from danger to danger as we flee from bombing, the regime and conflict to overcrowding and the coronavirus," Abu Abdo, 45, told Reuters. On Sunday Abdu returned with his family of seven to a village in Idlib's countryside.

"Here it's agricultural land and the air is clean and there's no congestion, but it's still a dangerous area," he said.

Vans and trucks stacked with mattresses and household appliances choked a road snaking south through Idlib province on Sunday as families driven out just months earlier by airstrikes sought to return.

"We fear there will be a regime escalation again, but life in the town, in our home, is better than displacement and poor conditions," said Fayez al-Assi, 49, who fled Jabal al-Zawiya in Idlib's southern countryside two and a half months ago.

"Even if there is bombing, we aren't afraid of it. We've gotten used to it," said Zakaria Shawish, 25, from the town of Ariha, south of Idlib. "Sitting here under the bombing is better than being displaced in the camps and not having a home."

Mohammad Hallaj, director of Syria's Response Coordination Group, which carries out work on migration data in the region, told Anadolu Agency (AA) that the Assad regime has seized major civilian settlements and that hundreds of civilians still do not prefer to return to regime-controlled areas and opt to stay in border camps.

"Returns to the Operation Euphrates Shield and Olive Branch areas from border camps continue. As long as warplanes do not carry out attacks, many civilians will return," Hallaj added.

Yearslong sieges caused the deterioration of the physical health of many people, who have suffered malnutrition and widespread poverty. Another risk is that people often live in overcrowded places and camps – ideal for the spread of the virus. The camps are generally in poor conditions with a lack of access to water, hygiene, medical aid and food.

According to U.N. numbers, there are currently 25 confirmed cases of the coronavirus in Syria, and two lost their lives to the disease. Yet, in a country with insufficient infrastructure to combat the pandemic, more are likely to be infected if the necessary measures are not taken.

The camps in northwestern Syria are densely populated and insufficient relief is reaching the people there. The health and education sectors are also struggling to provide the required services.

Even though nongovernmental organizations, the U.N. and Turkish institutions and relief organizations putting in efforts to meet the civilians' needs, the aid is insufficient in the face of the new coronavirus threat.

As the world's most developed countries are desperately fighting the virus, it is hard to expect a country with almost no standing hospital and where children cannot find water to wash their hands, to cope with the threat. Only half of the countries’ medical facilities are still operating.