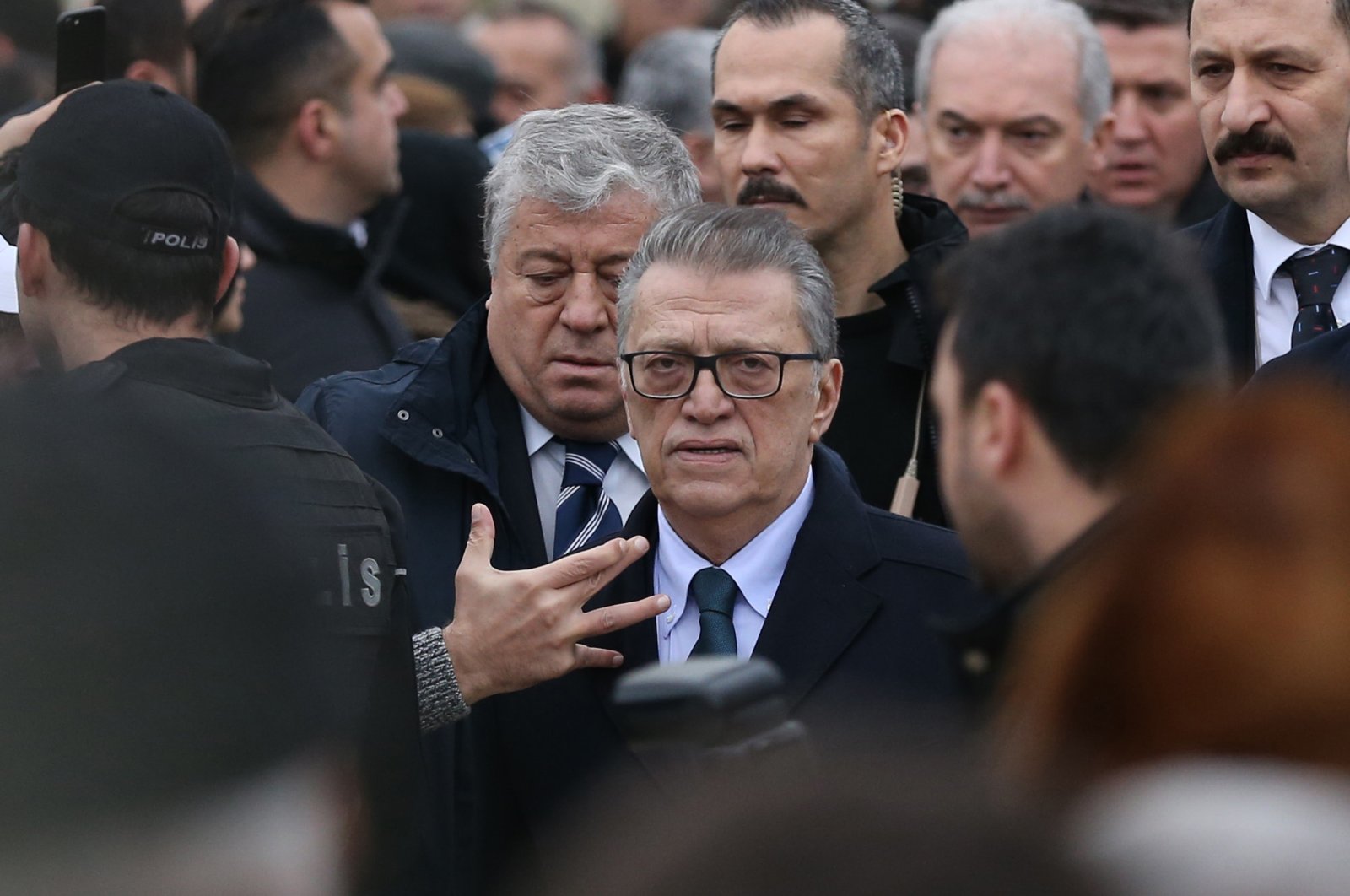 Former Turkish Prime Minister Mesut Yılmaz, a veteran politician who made his mark in Turkish politics in the 1980s and 1990s, died at the age of 73 on Friday after a long battle with lung cancer.

Yılmaz was undergoing treatment at a private hospital in Istanbul's Şişli district where he underwent brain surgery on May 5 due to a tumor. He was a known chain smoker, a habit he continued up until his late years. He was also a huge Galatasaray fan, up to the point that led to a famous protest by Fenerbahçe fans back in 2002. Yılmaz was seen attending important matches of the Yellow Reds during glorious European campaigns in the late 1990s and early 2000s.

Speaking to reporters in Istanbul, President Recep Tayyip Erdoğan offered his condolences to the Yılmaz family and to the Turkish nation for the death of the fellow statesman, saying he spoke with the late prime minister's wife Berna Yılmaz earlier in the day.

His brother Turgut told reporters Friday that a funeral ceremony for the late prime minister will be held Sunday at the Marmara University Faculty of Theology Mosque, where a funeral ceremony was held for his son Yavuz Yılmaz three years earlier.

The veteran politician was shaken in 2017 by the death of his son, who committed suicide at his home in Istanbul's Beykoz district. He is survived by a 33-year-old son, Hasan.

Born in 1947 to a family hailing from northeastern Turkey's Rize, Yılmaz was a graduate of the Sankt Georg Austrian High School and Istanbul Boys' High School, where he learned German that later served to his advantage in tough negotiations with the European Union, of which he was a solid supporter.

He graduated from the economics and finance department at the prestigious Faculty of Political Sciences (SBF - Mülkiye) of Ankara University in 1971 and resumed his post-graduate studies at the University of Cologne in Germany.

After a management career in the private sector, Yılmaz served as one of the founders of the center-right Motherland Party (ANAP) established by late President Turgut Özal in 1983. The party was crucial in Turkey's cautious switch from the military rule that came to power in a bloody coup in 1980, in addition to a radical switch from planned and state-dominated economy to liberal policies.

Between 1983 and 2002, Yılmaz served as a Rize deputy for ANAP for five consecutive terms, in addition to serving as an independent deputy from the same province between 2007 and 2011.

Until 1991, Yılmaz held the posts of minister of state, minister of culture and tourism and minister of foreign affairs in consecutive ANAP Cabinets. After Özal's election as president in 1989, he was among the top contenders as his successor for the prime minister and ANAP chairperson. When former Parliament Speaker and Prime Minister Yıldırım Akbulut resigned after a series of disagreements with Özal in 1991, Yılmaz managed to replace him after winning the intraparty struggle against the more conservative circles, who later switched to other parties such as late Prime Minister Necmettin Erbakan's Welfare Party (RP).

However, amid the political upheaval and economic woes, the Yılmaz-led ANAP came in second in 1991 elections as the party's eight-year reign came to an end. Until 1995, Yılmaz was the main opposition leader.

Following the 1995 general elections, when the conservative RP came in first when Turkish right-wing politics were deeply fragmented, Yılmaz was the obvious choice for pro-secular circles in bureaucracy and media to deny Erbakan the premiership. A coalition government with the center-right True Path Party (DYP) led by Yılmaz was the preferred outcome, and materialized after Erbakan's fruitless efforts to find a coalition partner. However, this Cabinet was short-lived due to a personal feud between Yılmaz and DYP leader Tansu Çiller, in addition to various corruption allegations in which coalition partners tried to undermine each other and became the dominant force in the center-right.

In June 1996, Çiller's DYP went on to partner with Erbakan's RP in the 54th government, which was forced to resign by the Turkish Armed Forces (TSK) in a process known as the Feb. 28, 1997 "post-modern coup" over alleged policies against secularism. In contrast with parliamentary precedents but in line with the president's constitutional powers, Yılmaz was tasked by President Süleyman Demirel to form a new government, which he managed to do so with the backing of veteran politician Bülent Ecevit's Democratic Left Party (DSP), disgruntled and pro-secular former DYP deputies led by former Parliament Speaker Hüsamettin Cindoruk under newly-formed Democratic Turkey Party (DTP) and outside support of the Republican People's Party (CHP). While these developments further alienated Turkey's conservative circles, Yılmaz and Demirel, former leader of the DYP who turned into a vocal critic of Çiller's leadership of his party, in principle defended their move for preventing an outright military coup.

Yılmaz's last stint as the prime minister came to an end in 1999 when the CHP retracted its reluctant support of the government over corruption allegations. The 55th government was the second one in Turkish history to be overthrown by a parliamentary motion of no confidence, and Yılmaz became the first and only prime minister tried by the Constitutional Court acting as the Supreme Tribunal.

Ecevit went on to form a minority government and developments during this short period, such as the capture of PKK leader Abdullah Öcalan, helped his DSP to emerge as the largest party in 1999 elections. He went on to form an uneasy coalition with the runner-up Nationalist Movement Party (MHP) of Devlet Bahçeli and Yılmaz's ANAP, now the fourth-largest party in Parliament.

This period also marked tensions between the government and the military, with the latter constantly interfering in political affairs and blaming the government for failing to swiftly act on pro-secular reforms imposed on Erbakan's government – such as a strict headscarf ban in public institutions, closure of secondary education sections of Imam Hatip vocational high schools, purging the government agencies of conservative-Islamist public officials and crackdown on conservative "Green" businesses – and corruption allegations. Yılmaz, now deputy prime minister, was the Cabinet's soft underbelly, especially in corruption probes, and was a vocal critic of the increasing military role in civilian affairs.

The shaky 57th government went through major events such as the Aug. 17, 1999 earthquake, which devastated the northwestern province of Kocaeli and killed more than 17,000 people in Turkey's main industrial hub.

The next challenge came from the economic front in 2001 as a row with staunchly secular former President Ahmet Necdet Sezer sparked a major crisis leading to the collapse of financial markets and more than a dozen banks. Despite these developments, the coalition government managed to introduce European Union reforms, including a ban on the death penalty, carried out uneasy economic policies imposed by the International Monetary Fund (IMF) to stabilize financial markets and resumed the calm in the terrorism front established after Öcalan's capture.

However, constant political bickering of the tumultuous 1990s, Ecevit's ailing health and cracks in the Cabinet paid off in the Nov. 3, 2002 elections, when the newly founded Justice and Development Party (AK Party) swept the polls and went on to become the dominant force in Turkish politics in decades to come. The CHP also doubled its vote and became the second party to pass the 10% threshold, while all other parties failed to enter Parliament. The election marked the end of the political careers for many veteran politicians, including Yılmaz, who resigned from ANAP leadership.

In his later years, he tried to reinvigorate the center-right and overcome the rift between former ANAP and DYP circles, who united in the Democrat Party (DP) established in 2007, but this party also failed amid AK Party's successful conduct and intraparty struggle.