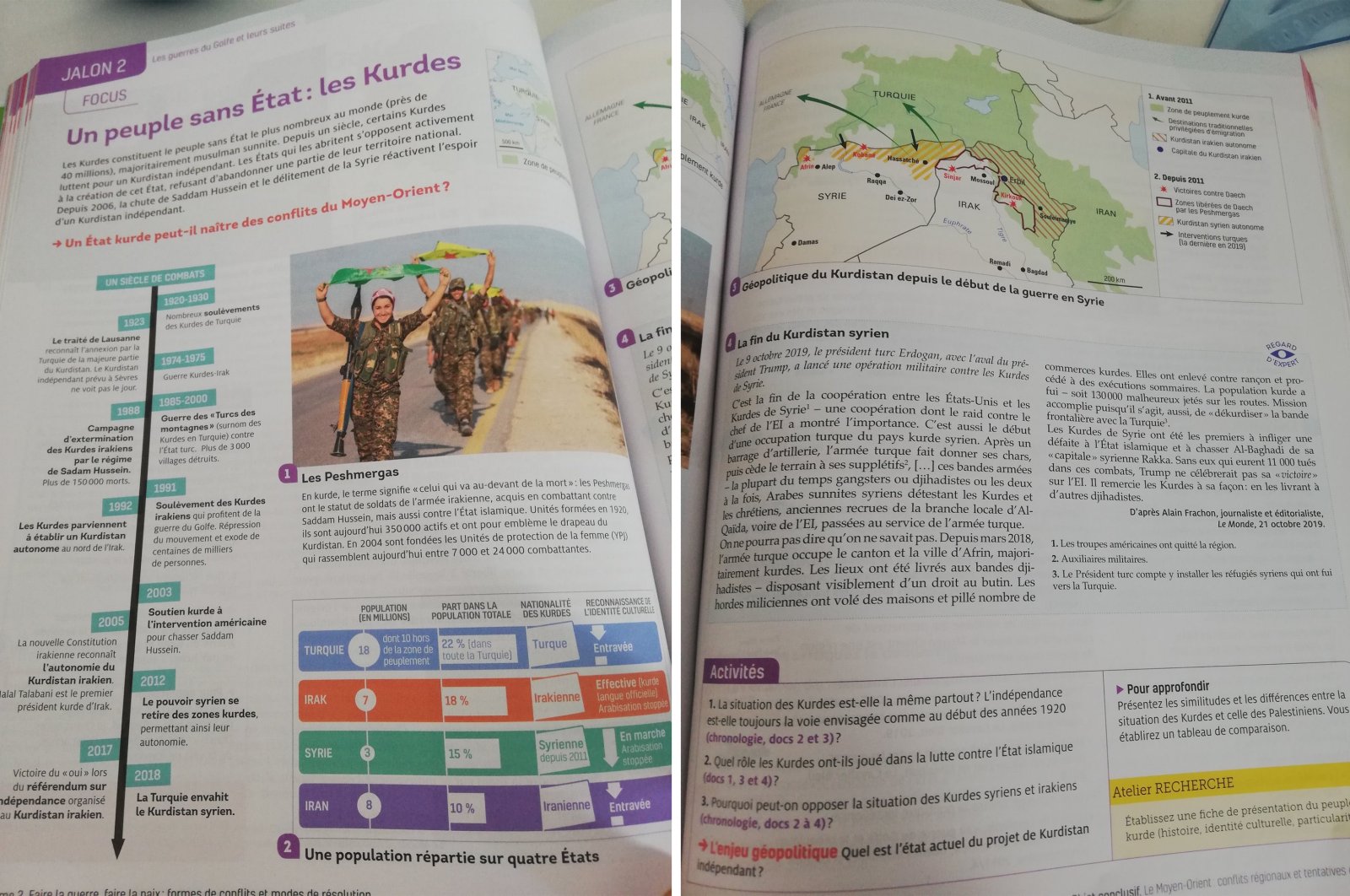 These pages shared on Twitter show YPG/PKK propaganda as printed on a supplementary French high school book, Sept. 6, 2020.
by DAILY SABAH WITH AA Sep 06, 2020 11:32 am
RECOMMENDED

The text, which is not officially included in the curriculum prepared by the French Ministry of Education but will be used as supplementary educational material, gives two full pages to the ideology of the groups.

According to information gathered by the AA correspondent, the book published by Belin Publishing House, will not be used all over the country, but history teachers have the option to employ the materials in their classrooms.

There is a section in the book titled “The Nation Without a Country: Kurds” that includes the phrase, “Kurds are the biggest nation on earth who do not have a country.”

The publication also includes information regarding the history of the PKK, which claims to be fighting for the rights of the Kurds. Ironically, the group has killed tens of thousands of civilians, of which the Kurdish people are a majority, with its terrorist activities.

According to AA, the text also includes information regarding the Peshmerga, the armed forces of the Iraqi Kurdistan Regional Government (KRG), which, in fact, is Turkey's partner in the fight against the YPG/PKK.

The book also uses a piece by the French Le Monde newspaper titled “The End of Syrian Kurdistan” dated Sept. 21, 2019. In the article, the paper alleges that President Recep Tayyip Erdoğan, who kicked off Turkey’s Operation Peace Spring in northern Syria to stabilize the region and ensure border safety, “targets Kurds.”

Back in April 2019, French President Emmanuel Macron hosted a delegation of the so-called SDF, which is dominated by the YPG terrorist group.

Macron assured the YPG representatives, who were not named, of the "active support of France in the fight against Daesh which continues to be a menace for collective security," the presidency said in a statement. The move came following the U.S. decision to withdraw from Syria, creating a fear among the YPG terrorists that they will be left alone without support in the region.

The U.S. has primarily partnered with the YPG in northeastern Syria in the fight against the Daesh terrorist group. Turkey strongly opposes the YPG's presence in northern Syria, which has been a major sticking point in strained Ankara-Washington relations. The U.S. has provided military training and thousands of truckloads of weaponry to the YPG, despite its NATO ally's security concerns.