G-20 agrees on joint stance against coronavirus, uniting forces to find a treatment 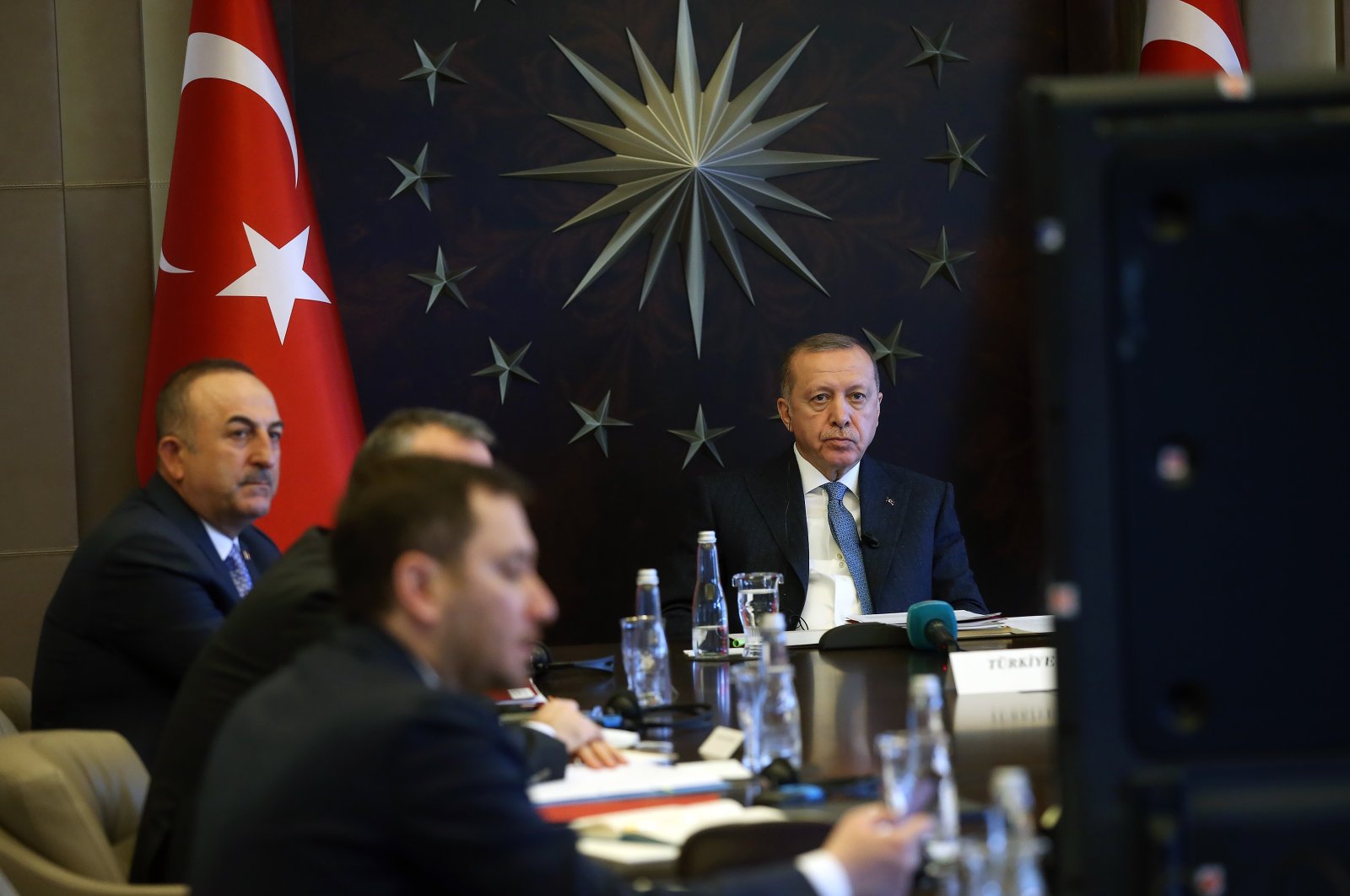 Erdoğan is joining the meeting from the Huber Mansion in Istanbul, according to a statement by Turkey's Communications Directorate.

Releasing a statement following the meeting, G-20 countries pledged to do whatever it took to overcome the coronavirus pandemic. The countries underlined that tackling the pandemic and its intertwined medical, social and economic impact was their "absolute priority." The statement also added that the countries would be committed to presenting a united front against the coronavirus.

"We commit to take all necessary health measures and seek to ensure adequate financing to contain the pandemic and protect people, especially the most vulnerable," the statement says. "We task our health ministers to meet as needed to share national best practices and develop a set of G-20 urgent actions on jointly combatting the pandemic by their ministerial meeting in April."

"To safeguard the future, we commit to strengthen national, regional and global capacities to respond to potential infectious disease outbreaks by substantially increasing our epidemic preparedness spending," the statement continued.

Saudi Arabia, which is presiding over the G-20 this year, opened the meeting with an urgent appeal from King Salman for the world's most powerful nations to finance the research and development of a vaccine for the virus and to ensure the availability of vital medical supplies and equipment. “This human crisis requires a global response. The world counts on us to come together and cooperate in order to face this challenge," the Saudi monarch said during the virtual summit.

Images from the video conference were shared on social media by a number of participants. World leaders like India's Narendra Modi, Japan's Shinzo Abe and Canada's Justin Trudeau, whose wife has contracted the virus, could be seen in little boxes on a screen seated at desks in photos from European Council President Charles Michel. Meanwhile, U.S. President Donald Trump was shown seated at the end of a long conference table in Washington, D.C., with other American officials in photos shared by the Saudi Foreign Ministry.

The meeting was also expected to include Chinese President Xi Jinping and Russian President Vladimir Putin, as well as German Chancellor Angela Merkel, who was taking part in the summit from her apartment in Berlin where she is in quarantine following contact with a doctor who tested positive for the virus. Two tests on Merkel have come back negative, but she is still in need of further tests.

G-20 finance ministers and central bankers agreed during a separate videoconference meeting Monday to develop an "action plan" to respond to the outbreak, which the International Monetary Fund (IMF) expects to trigger a global recession. A subsequent statement from the Saudi G-20 secretariat offered few details.

The leaders' summit will be complicated by an oil price war between two members, Saudi Arabia and Russia, and rising tensions between two others, the United States and China, over the origin of the virus, which has infected 481,230 people globally.

The number of actual infections is believed to be higher since many countries are only testing severe cases or patients who require hospitalization.

A disagreement between the countries erupted this week among the Group of 7 leading industrialized democracies, which sparred over whether to call out China as the source of the coronavirus. The foreign ministers were unable to agree on a U.S. push to identify it as the “Wuhan virus," in reference to the city in China where it first appeared. As a result, the group opted against releasing a statement after the call.

The International Labor Organization says nearly 40% of the world’s population has no health insurance or access to national health services and that 55%, or 4 billion people, do not benefit from any form of social protection whatsoever. It said the current health crisis made clear that not nearly enough progress had been made by governments in the years since the 2008 financial crisis to expand access to health services, sickness benefits and unemployment protection.

The International Monetary Fund and World Bank issued a call on G-20 countries ahead of the virtual leaders' summit, warning of severe economic and social consequences for developing countries, home to a quarter of the world's population and where most of the world's poorest people reside.

Meanwhile, Amnesty International Thursday urged G-20 nations ahead of their meeting to mobilize their resources to protect the most vulnerable from the coronavirus.

"The response to this pandemic must be based on cooperation and sharing of resources because national strategies will not be enough on their own," said Amnesty International, urging coordinated responses to cope with the COVID-19 crisis which has killed over 22,000 people in 182 countries and territories.

"Not only is helping the most marginalized the right thing to do, but inadequate health care in any part of the world is also a risk to us all. The rapid spread of COVID-19 has shown how connected we all are," said Netsanet Belay, research and advocacy director of the rights group.

"They (G-20 countries) have a lot of financial measures at their disposal, and they must consider them all. We will beat this virus together, for everyone, or not at all," Belay added.

Urging transparency in decision-making, Amnesty said that any measures introduced by the G-20 must guarantee access for all to preventive care and good quality and affordable treatment, including those most at risk.

U.N. Secretary-General Antonio Guterres also urged G-20 leaders on Tuesday to adopt a "wartime” plan including a stimulus package "in the trillions of dollars” for businesses, workers and households in developing countries trying to tackle the coronavirus pandemic.

He said in a letter to the Group of 20 leaders that their countries accounted for 85% of the world’s gross domestic product and thus had "a direct interest and critical role to play in helping developing countries cope with the crisis.”

"Let us remember that we are only as strong as the weakest health system in our interconnected world,” the U.N. chief said. "We must create the conditions and mobilize the resources necessary to ensure that developing countries have equal opportunities to respond to this crisis in their communities and economies.”

Guterres warned: "Anything short of this commitment would lead to a pandemic of apocalyptic proportions affecting us all.”

Guterres, who will participate in the meeting, said a coordinated stimulus package in the trillions of dollars "would include scaling up cash transfer measures, social protection, tax abatement, fiscal stimulus, low-interest rates, access to credit, insurance, and wage support schemes.”

The secretary-general stressed that "these expansionary policies must be accompanied by a clear repudiation of protectionism.”

"I urge G-20 leaders to commit to ban tariffs, quotas or non-tariff measures and remove restrictions on cross-border trade that affect the deployment of medical equipment, medicines and other essential goods to fight the epidemic,” Guterres said.

He also encouraged countries to waive sanctions to allow for the delivery of food, health supplies, medical equipment and support against COVID-19, saying: "This is the time for solidarity, not exclusion.”