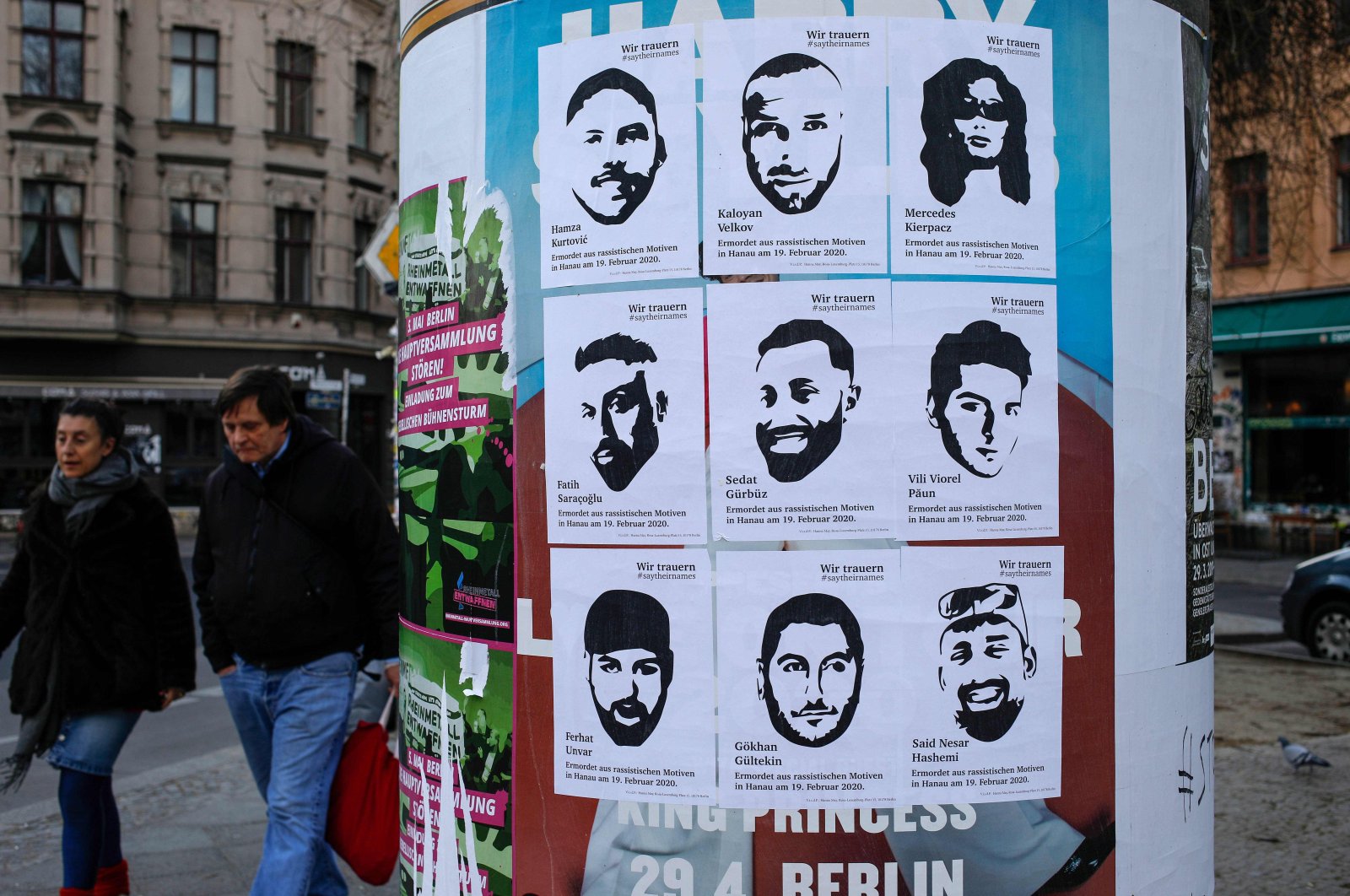 Posters with the pictures and names of the victims of a right-wing extremist gunman, who killed nine people in a racist terror attack in Hanau on Feb. 19, 2020, were posted up on an advertising column in Berlin's Kreuzberg district on Thursday, March 19, 2020. (AFP Photo)
by Daily Sabah with DPA Mar 31, 2020 8:44 am

The response to xenophobia and racism fell flat once again in Germany as police announced they don't believe the perpetrator of last month's terrorist attacks in Hanau was a far-right extremist.

According to local media reports on Monday, the suspect, who has been identified only as Tobias R., reportedly chose his victims with the aim of attracting the most attention possible for his conspiracy theories involving secret service surveillance.

He did not go through a typical far-right extremist radicalization, the broadcasters WDR and NDR, and the Sueddeutsche Zeitung newspaper reported.

A federal prosecution spokesman declined to comment on Monday, saying that investigations are ongoing.

Tobias R. stormed into two shisha bars and fatally shot nine people of foreign descent, including five Turks, during the Feb. 19 attack in the center of Hanau. The 43-year-old then returned home and killed his 72-year-old mother and himself.

The reports suggest a change of focus by investigators. Prosecution officials said from soon after the attack that there were "serious indications of a racist motivation."

According to the media reports, the investigators believe that racism did not dominate the suspect's ideology. Rather, they say, he was caught up in conspiracy theories related to intelligence services and suffered from paranoia.

No evidence has been found of Tobias R dabbling in right-wing ideology or right-wing terrorism, the reports said.

Yet in the 24-page manifesto of the terrorist, that he posted shortly before his attack online, he wrote about certain “ethnic groups, races and cultures” that are “destructive in every respect” and therefore have to be “completely destroyed.”

Right after the attack, Chancellor Angela Merkel was quoted saying: “Racism is a poison, hate is a poison” that has been “to blame for far too many crimes.”

The deputies of the Hessian state parliament last week commemorated the victims of the attack in Hanau and Volksmarsen. President of the state Boris Rhein said that these two attacks sent shockwaves throughout the country. “Two attacks that particularly rattled us here in Hesse, because they happened right in the middle of us. Two attacks with terrible consequences.”

The attack further raised tensions in Germany, where far-right crimes are on the rise. Preliminary figures show that more than 870 attacks occurred against Muslims in Germany.