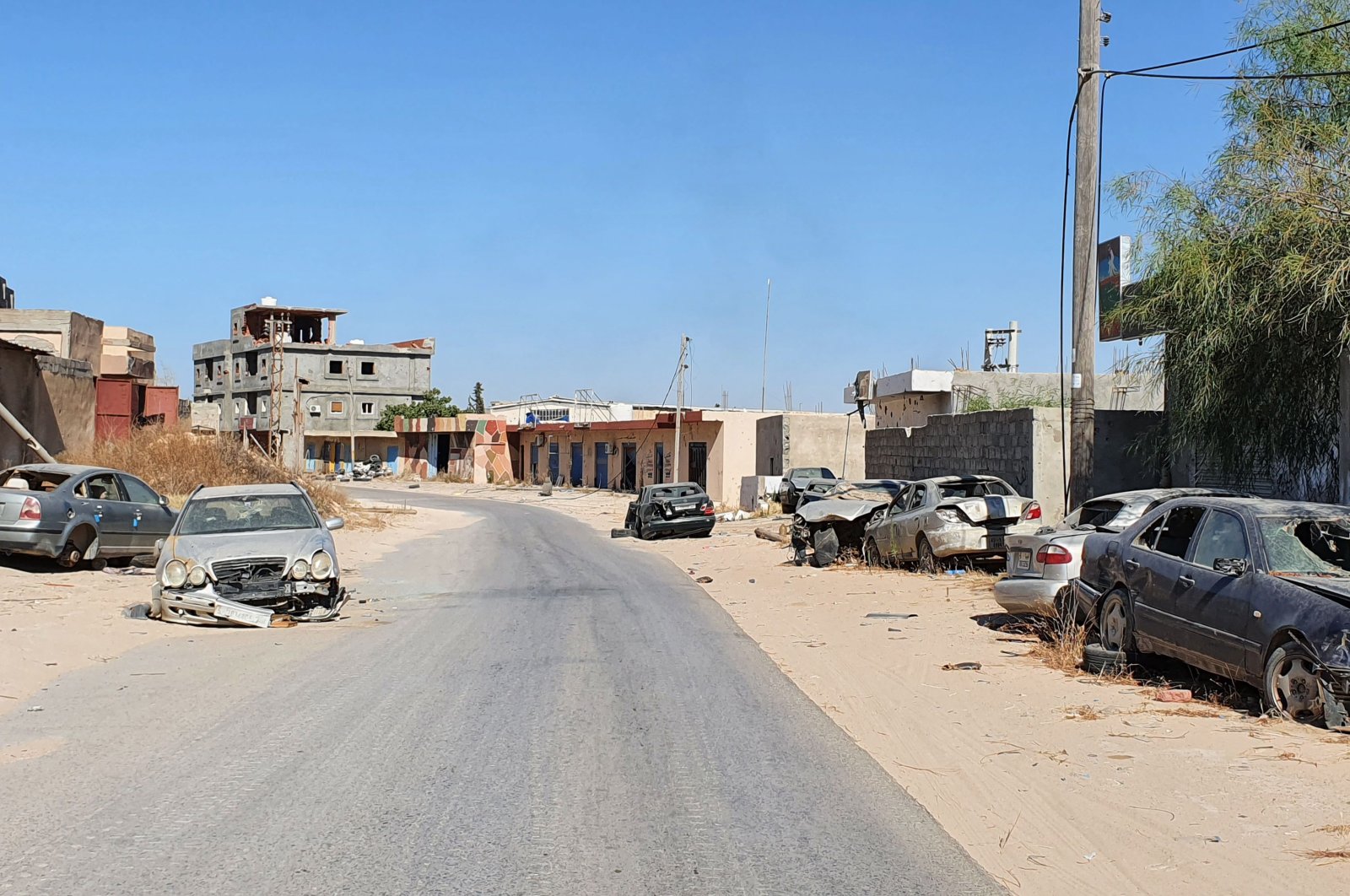 Damaged cars line a road in the Salaheddin district south of the Libyan capital Tripoli, June 21, 2020. (AFP Photo)
by DAILY SABAH WITH AGENCIES Jun 26, 2020 11:24 am
RECOMMENDED

Germany, France and Italy have called on conflicting parties in Libya to "immediately" and "unconditionally" cease fighting and engage in talks for a sustainable and credible cease-fire agreement.

In a joint statement released Thursday night, the three EU member states voiced concern over rising tensions and regional instability amid recent threats to intervene by Abdel-Fattah el-Sissi, the president of neighboring Egypt.

"In light of the growing risks of a deterioration of the situation in Libya and regional escalation, France, Germany and Italy call on all Libyan parties to immediately and unconditionally cease fighting and to suspend the ongoing military build-up throughout the country," they stressed.

El-Sissi warned that any attack on Sirte, a city on the Mediterranean coast, or the inland Jufra air base by the Tripoli forces would amount to crossing a "red line." He said Egypt could intervene militarily to protect its western border with the oil-rich country.

In their joint statement, Germany, France, and Italy called on all foreign actors to end all interference and to fully respect the U.N. Security Council arms embargo.

Despite the embargo, Haftar's forces have received large supplies of military equipment from the United Arab Emirates (UAE), Egypt and Russia.

Long reluctant to cease fighting, Haftar balked at signing a cease-fire deal at the Berlin conference this January, despite strong support by world powers and regional actors for U.N.-led talks towards a political solution.

Germany, France and Italy have called on Libyan parties to resume U.N.-led talks through convening a long-delayed "5+5 military committee" meeting.

"(We) encourage the swift conclusion of negotiations within the 5+5 military working group under the auspices of UNSMIL to enable the signature of a sustainable and credible cease-fire agreement," they stressed.

"This is an essential element to create the necessary climate for the concrete resumption of inter-Libyan political dialogue which will enable a sustainable resolution to the conflict."

Libya has been torn by civil war since the ouster of late ruler Moammar Gadhafi in 2011. Libya's new government was founded in 2015 under a U.N.-led agreement, but efforts for a long-term political settlement failed due to the military offensive by Haftar's forces, resulting in civilian chaos and more than 1,000 deaths.

After sweeping across much of the country, making their way deep into the west and fighting in the suburbs of the Libyan capital, Haftar's forces were forced to retreat from most areas they captured in their offensive. That reversal came after Tripoli-based fighters, with Turkish support, gained the upper hand in the war earlier this month.

In March, the Libyan government launched Operation Peace Storm to counter attacks on the capital, and recently retook strategic locations, including the al-Watiya air base and the city of Tarhuna, Haftar's final stronghold in western Libya. They also aim to retake Sirte. Taking Sirte could allow them to gain control of oil fields and facilities in the south that Haftar had seized earlier this year as part of his offensive on Tripoli.

Turkey has stressed the need for a political solution in Libya, decrying efforts by Haftar to oust the country's legitimate government.

Kalın also told broadcaster CNN Türk that Turkey has urged the U.S., which was previously reluctant to play a "decisive role" in the conflict, to take a more active role in Libya.